Charles Leslie Maximilian Perryman (born December 7, 2000) is an American indie film director, actor, writer, sound designer, and photographer. He is best known for his horror, documentary, and animated films and television shows such as the fan-created show My Little Pony: The Last Generation (2016) and Booker (2020).

Perryman has also previously published two novels, Clockwise.[1] (2015) and Grey Wolf[2] (2017), which have since been removed from further publication as of now. 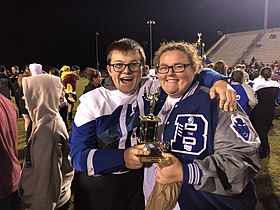 Max Perryman before weight loss and gender transitioning at a marching band competition.

Perryman was born in 2000, in New Orleans, Louisiana, the son of Jennifer Perryman. As a preteen, Perryman would create stop motion short films in his bedroom using Monster High dolls and little to no equipment. None of these films have been officially published, but drawings have been shown of some of his first drawings. Perryman attended Jones Elementary School in Bremen, Georgia. Perryman attended Bremen High School but was not a good student. He participated on the drumline at Bremen High. Perryman was an introvert and found enjoyment through photography, drawing, watching movies, and animating. His future work would be heavily influenced by such childhood heroes as Tim Burton and Dr. Seuss. After graduating from Bremen High School, Perryman attended the Savannah College of Art and Design in Savannah, Georgia, to study film production and audio engineering. He is still enrolled as a student and has created titles such as The Y2K Archivist (2020) and Black Cat: An Unusually Unlucky Underdog Story (2020).

The 2010s marked the beginning of Perryman’s professional career in the arts.

In late 2008, Perryman taught himself the art of 3D animation, stating in a YouTube live stream:

The amount of talent displayed at a young age was remarkable, and in high school he was given the free position of writing articles for the online tutorial website, LearnMMD[3]. He wrote articles for the website from 2016 to 2019, and is still registered as an author[4] for the website. Most of Perryman's career through middle and high school were freelance jobs that were completed through DeviantArt[5]

Through his filmmaking and animation, Perryman was awarded the SCAD Achievement Scholarship in 2019 from his college.

Most short films created by Perryman have been through the 2020s. He continues to work on My Little Pony: The Last Generation under the provision of his film group, Greyhound Films.

According to the website's description:

Greyhound Films is a small film production group responsible for indie films, documentaries, and parody animated shows that are viewable on YouTube and Amazon Prime. Film industry related services are offered separately on a case-to-case basis from our team of hard-working crew members. Check the blog for updates on the projects.  There are also floating tabs in the menu, so feel free to explore the website further by extending these opportunities.

Greyhound Films was created to help young filmmakers wanting to come up in the industry. All donations that do not go into productions go into organizations. Perryman has previously stated he would like to turn Greyhound Films into an organization for, in his own words, "kids with dreams and nowhere to go."

Perryman is known to have lost three-hundred pounds and speaks regularly about this on his social media. He has previously spoken about his gastric sleeve performed by Clifford P. Black, Jr., MD, FACS[6] and Lauren Waltz, PA-C.

Perryman is a known transgender man and is an advocate for trans rights, as well as many other human rights movements. In a now private 2020 YouTube live stream, Perryman stated:

"I came out to some of my close friends when I probably, like, just turned 19. I thought I was crazy, but hell, sometimes crazy is the right thing to do. Take care of yourself first, because, without you, you won't have to worry."

It has also been well stated on his social media pages that he faces backlash from his immediate family. He states that his mother is "very supportive of him, even though she might not support his decision."

Perryman has a tight resume of voice acting and onscreen acting.

Perryman was a fictional writer throughout high school[9], and he has turned his unpublished or revoked works into film scripts.

Share
Retrieved from "https://en.everybodywiki.com/index.php?title=Max_Perryman&oldid=2214542"
Categories:
Hidden categories:
This page was last edited on 30 December 2021, at 21:27.
Content is available under License CC BY-SA 3.0 unless otherwise noted.
This page has been accessed 191 times.
Privacy policy
About EverybodyWiki Bios & Wiki
Disclaimers