Metropolis of Chișinău and All Moldova

From EverybodyWiki Bios & Wiki
Jump to navigation Jump to search
This article is about one of the Orthodox churches in Moldova. For other uses, see Moldovan Orthodox Church (disambiguation).

The Metropolis of Chișinău and All Moldova (Romanian: Mitropolia Chișinăului și a întregii Moldove; Russian: Кишинёвско-Молда́вская митропо́лия), also referred to as the Moldovan Orthodox Church (Romanian: Biserica Ortodoxă din Moldova; Russian: Правосла́вная це́рковь Молдо́вы), is a self-governing metropolitanate under the Russian Orthodox Church. Its canonical territory is the Republic of Moldova.

The Metropolis of Chișinău and All Moldova is the largest church in the country, and one of the two main Orthodox churches in Moldova (beside the Metropolis of Bessarabia, a self-governing metropolitanate of the Romanian Orthodox Church). In the 2004 census in Moldova 3,158,015 people or 95.5% of those declaring a religion claimed to be Eastern Orthodox Christians of all rites.

Main article: History of the Orthodox Church in Moldova 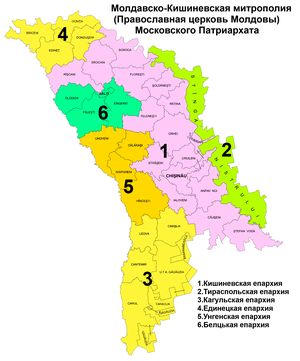 Eparchies of the Metropolis of Chișinău and All Moldova

It is believed that Orthodox Christianity was first brought to Romania and Moldova by the Apostle Andrew. Be that as it may, by the 14th century the Orthodox Church in the Principality of Moldavia—today northeastern Romania, Moldova, and southwestern Ukraine—was under the authority of the Metropolitan of Galicia.[citation needed] In 1391, the Patriarchate of Constantinople, which had jurisdiction over the region, elected a metropolitan for the Metropolis of Moldavia specifically. By the 15th century this metropolitan was elected by the autocephalous Church of Ohrid, but following the abolition of the latter it returned to the jurisdiction of the Church of Constantinople. During this time, in the 17th century, the Metropolis of Moldavia transitioned from using Church Slavonic to Romanian language.

In 1812, the eastern half of Moldavia (renamed as Bessarabia) was annexed by the Russian Empire, which placed the Orthodox churches in this territory under the jurisdiction of the Russian Orthodox Church. In 1813, it was established the Eparchy of Kishinev (Chișinău) and Hotin, under Romanian Archbishop Gavril Bănulescu-Bodoni. After 1821, the Russian state and church started a policy of centralization and Russification that included the imposition of Church Slavonic instead of Romanian as the liturgical language, and all archbishops as Russians.[2][3] However, native priests continue to serve in the rural parishes (covering most of the Moldavian population); as most did not speak Russian, attempts to establish a Russian-only seminary failed, and the rural clergy became increasingly isolated from the church leadership. Consequently, after 1867, church authorities began using both Romanian and Russian in their publications, and in 1905 there was a short-lived initiative to make Romanian the language of education.[4]

In 1858, after southern Bessarabia was returned to Moldavia, which soon united with Wallachia to form Romania, the orthodox churches in Cahul, Bolgrad, and Ismail re-entered under the Romanian Church jurisdiction of the Metropolis of Moldavia, which established the Diocese of the Lower Danube, in 1864.[3][5] In 1878, after Russia re-annexed southern Bessarabia, the Russian Church jurisdiction was reinstated.

Following the Molotov–Ribbentrop Pact, the Soviet Union annexed Bessarabia and proclaimed the Moldavian Soviet Socialist Republic. The Metropolis of Bessarabia was forced to interrupt its activity.[6] In the same period, the Moscow Patriarchate of the Russian Orthodox Church established on the territory of the new soviet republic a new Diocese of Kishinev. In 1990, it was raised to the rank of the Archdiocese.[8]

A year after independence from the USSR as the Republic of Moldova in 1991, the Russian Orthodox Church granted autonomy to its jurisdiction in the new country and raised the rank of the Archdiocese to the Metropolis of Chișinău and All Moldova.[9]

Since the grant of autonomy to the Moldovan Orthodox Church by the Moscow Patriarchate, the Church has administered its local affairs through a local synod chaired by its primate, and the Church's eparchial or diocesan bishops.

The position of the Romanian Orthodox Church[edit]

The Metropolis of Bessarabia had 84 parishes in Moldova at the time of its organization, and is considered a schismatic organization by the Russian Orthodox Church. On the other hand, the Romanian Orthodox Church is in favour of a "peaceful coexistence and brotherly cooperation between the two Orthodox Metropolises which operate under the jurisdiction of the two sister Orthodox Patriarchies".[6]

"Moldova" is an invalid category parameter for Template:Coord missing.
The problem is usually caused either by a spelling mistake or by an-over-precise category.
For a full list of categories, see Category:Unclassified articles missing geocoordinate data and its subcategories.