Autocephaly (/ˌɔːtəˈsɛfəli/; from Greek: αὐτοκεφαλία, meaning "property of being self-headed") is the status of a hierarchical Christian church whose head bishop does not report to any higher-ranking bishop. The term is primarily used in Eastern Orthodox and Oriental Orthodox churches. The status has been compared with that of the churches (provinces) within the Anglican Communion.[1]

In the first centuries of the history of the Christian church, the autocephalous status of a local church was promulgated by canons of the ecumenical councils. There developed the pentarchy, i.e. a model of ecclesiastical organization where the universal Church was governed by the primates (patriarchs) of the five major episcopal sees of the Roman Empire: Rome, Constantinople, Alexandria, Antioch, and Jerusalem.[2] Additionally, the Church of Lebanon, previously within the Church of Antioch, was granted full autocephaly in 685 AD by Pope Sergius I.[3][4] the Church of Cyprus, also previously within the Church of Antioch, was granted autocephaly by Canon VIII of the Council of Ephesus[5] It has since been governed by the Archbishop of Cyprus, who is not subject to any higher ecclesiastical authority.

The right to grant autocephaly is nowadays a contested issue, the main opponents in the dispute being the Ecumenical Patriarchate, which claims this right as its prerogative,[6][7] and the Russian Orthodox Church (the Moscow Patriarchate), which insists that an already established autocephaly has the right to grant independence to a part thereof.[8][9] Thus, the Orthodox Church in America was granted autocephaly in 1970 by the Moscow Patriarchate, but this new status was not recognized by most patriarchates.[10] In the modern era, the issue of autocephaly has been closely linked to the issue of self-determination and political independence of a nation; self-proclamation of autocephaly was normally followed by a long period of non-recognition and schism with the mother church.

Following the establishment of an independent Greece in 1832, the Greek government in 1833 unilaterally proclaimed the Orthodox church in the kingdom (until then within the jurisdiction of the Ecumenical Patriarchate) to be autocephalous. But it was not until June 1850 that the Mother Church, under the Patriarch Anthimus IV, recognized this status.[11]

In May 1872, the Bulgarian Exarchate, set up by the Ottoman government two years prior, broke away from the Ecumenical Patriarchate, following the start of the people's struggle for national self-determination. The Bulgarian Church was recognized in 1945 as an autocephalous patriarchate, following the end of World War II and after decades of schism. By that time, Bulgaria was ruled by the Communist party and was behind the "Iron Curtain" of the Soviet Union.

Following the Congress of Berlin (1878), which established Serbia's political independence, full ecclesiastical independence for the Metropolitanate of Belgrade was negotiated and recognized by the Ecumenical Patriarchate in 1879. Additionally, in the course of the 1848 revolution, following the proclamation of the Serbian Vojvodina (Serbian Duchy) within the Austrian Empire in May 1848, the autocephalous Patriarchate of Karlovci was instituted by the Austrian government. It was abolished in 1920, shortly after the dissolution of Austria-Hungary in 1918 following the Great War. Vojvodina was then incorporated into the Kingdom of Serbs, Croats and Slovenes. The Patriarchate of Karlovci was merged into the newly united Serbian Orthodox Church under Patriarch Dimitrije residing in Belgrade, the capital of the new country that comprised all the Serb-populated lands. The united Serbian Church also incorporated the hitherto autonomous Church in Montenegro, whose independence had been formally abolished by Regent Alexander's decree in June 1920.

The autocephalous status of the Romanian Church, legally mandated by the local authorities in 1865, was recognized by the Ecumenical Patriarchate in 1885, following the international recognition of the independence of the United Principalities of Moldavia and Wallachia (later Kingdom of Romania) in 1878.[12]

In late March 1917, following the abdication of the Russian tsar Nicholas II earlier that month and the establishment of the Special Transcaucasian Committee, the bishops of the Russian Orthodox Church in Georgia, then within the Russian Empire, unilaterally proclaimed independence of the Georgian Orthodox Church. This was not recognized by the Moscow Patriarchate until 1943, nor by the Ecumenical Patriarchate until 1990.[13][14][15]

In September 1922, Albanian Orthodox clergy and laymen proclaimed autocephaly of the Church of Albania at the Great Congress in Berat. The church was recognized by the Ecumenical Patriarch of Constantinople in 1937.

The independent Kiev Patriarchate was proclaimed in 1992, shortly after the proclamation of independence of Ukraine and the dissolution of the USSR in 1991. The Moscow Patriarchate has condemned it as schismatic, as it claims jurisdiction over Ukraine. Other Orthodox churches have not yet recognized Ukraine as autocephalous. In 2018, the problem of autocephaly in Ukraine became a fiercely contested issue and a part of the overall geopolitical confrontation between Russia and Ukraine, as well as between the Moscow Patriarchate and the Ecumenical Patriarchate of Constantinople.[16][17][18]

A similar situation persists in North Macedonia, where the Macedonian Orthodox Church – Ohrid Archbishopric remains canonically unrecognized since 1967, when it split off from the Serbian Church and proclaimed autocephaly. The Serbian Church still maintains an autonomous Orthodox Ohrid Archbishopric in North Macedonia, which is recognised by all other Orthodox churches as the country's canonical local church.

One step short of autocephaly is autonomy. A church that is autonomous has its highest-ranking bishop, such as an archbishop or metropolitan, approved (or ordained) by the primate of the mother church, but is self-governing in all other respects. The modern Russian Orthodox Church (the Moscow patriarchate) also has the so called "self-governing churches", such as the Ukrainian Orthodox Church (Moscow Patriarchate), in addition to churches that it refers to as "autonomous," such as the Japanese Orthodox Church. Until 2011 these were not regarded as constituent parts of the Moscow Patriarchate.[19] 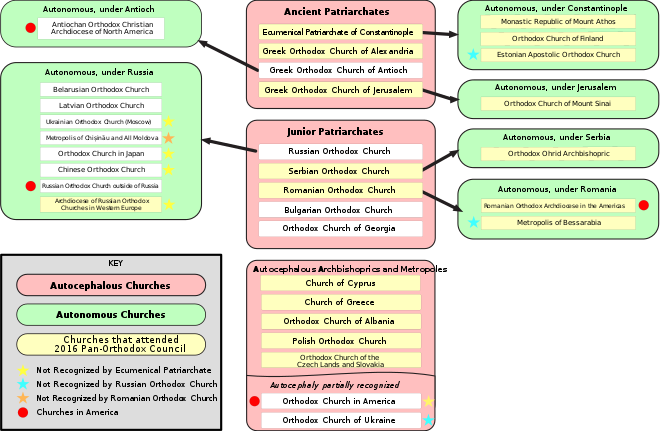 Retrieved from "https://en.everybodywiki.com/index.php?title=Autocephaly&oldid=859158"
Categories:
Hidden categories:
This page was last edited on 17 July 2020, at 07:45.
This page has been accessed 1,234 times.
Content is available under License CC BY-SA 3.0 unless otherwise noted.
Privacy policy
About EverybodyWiki Bios & Wiki
Disclaimers