The seat of the patriarchate was formerly Antioch, in what is now Turkey. However, in the 14th century, it was moved to Damascus, modern-day Syria, following the Ottoman invasion of Antioch. Its traditional territory includes Syria, Lebanon, Iraq, Kuwait, Arab countries of the Persian Gulf and also parts of Turkey. Its territory formerly included the Church of Cyprus until the latter became autocephalous in 431. Both the Orthodox Churches of Antioch and Cyprus are members of the Middle East Council of Churches.

Its North American branch is autonomous, although the Holy Synod of Antioch still appoints its head bishop, chosen from a list of three candidates nominated in the North American archdiocese. Its Australasia and Oceania branch is the largest in terms of geographic area due to the relatively large size of Australia and the large portion of the Pacific Ocean that the archdiocese covers.

The head of the Orthodox Church of Antioch is called Patriarch. The present Greek Orthodox Patriarch of Antioch is John X Yazigi, who presided over the Archdiocese of Western and Central Europe (2008–2013). He was elected as primate of the Greek Orthodox Patriarchate of Antioch and All The East as John X of Antioch (Yazigi) on December 17, 2012. He succeeded Ignatius IV who had died on December 5, 2012. Membership statistics are not available, but may be as high as 1,100,000 in Syria[4] and 400,000 in Lebanon where they make up 8% of the population or 20% of Christians who make up 39-41% of Lebanon. The seat of the Patriarch in Damascus is the Mariamite Cathedral of Damascus.

The Greek Orthodox Church of Antioch is one of several churches that lay claim to be the canonical incumbent of the ancient see of St Peter and St Paul in Antioch. The Oriental Orthodox Syriac Orthodox Church of Antioch makes the same claim, as do the Syriac Catholic Church, the Maronite Church, and the Melkite Greek Catholic Church, all of them Eastern Catholic Churches in full communion with the Holy See. These three, however, mutually recognize each other as holding authentic patriarchates, being part of the same Catholic communion. The Roman Catholic Church also appointed titular Latin Rite patriarchs for many centuries, until the office was left vacant in 1953 and abolished in 1964 and all claims renounced. 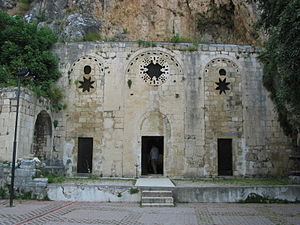 Church of Saint Peter in Antioch

The Greek Orthodox Church of Antioch claims the status of most ancient Christian church in the world. According to Luke the Evangelist- himself a Greco-Syrian member of that community:

Acts 6 points to the problematic cultural tensions between the Hellenized Jews and Greek-speaking Judeo-Christians centered around Antioch and related Cilician, Southern-Anatolian and Syrian "Diasporas" and (the generally more conservative) Aramaic-speaking Jewish converts to Christianity based in Jerusalem and neighboring Israeli towns:

"There is neither Jew nor Greek"[edit]

These ethno-cultural and social tensions were eventually surmounted by the emergence of a new, typically Antiochian Greek doctrine (doxa) spearheaded by Paul (himself a Hellenized Cilician Jew) and his followers be they 1. Established, autochthonous Hellenized Cilician-Western Syrian Jews (themselves descendants of Babylonian and ‘Asian’ Jewish migrants who had adopted early on various elements of Greek culture and civilization while retaining a generally conservative attachment to Jewish laws & traditions), 2. Heathen, ‘Classical’ Greeks, Greco-Macedonian and Greco-Syrian gentiles, and 3. the local, autochthonous descendants of Greek or Greco-Syrian converts to mainstream Judaism – known as “Proselytes” (Greek: προσήλυτος/proselytes or ‘newcomers to Israel’) and Greek-speaking Jews born of mixed marriages.

Paul's efforts were probably facilitated by the arrival of a fourth wave of Greek-speaking newcomers to Cilicia/Southern Turkey and Northwestern Syria: Cypriot and ‘Cyrenian’ (Libyan) Jewish migrants of non-Egyptian North African Jewish origin and gentile Roman settlers from Italy- many of whom already spoke fluent Koine Greek and/or sent their children to Greco-Syrian schools. Some scholars believe that, at the time, these Cypriot and Cyrenian North African Jewish migrants were generally less affluent than the autochthonous Cilician-Syrian Jews and practiced a more ‘liberal’ form of Judaism, more propitious for the formation of a new canon:

[North African] Cyrenian Jews were of sufficient importance in those days to have their name associated with a synagogue at Jerusalem (Acts 6:9). And when the persecution arose about Stephen [a Hellenized Syrian-Cilician Jew, and one of the first known converts to Christianity], some of these Jews of Cyrene who had been converted at Jerusalem, were scattered abroad and came with others to Antioch and one of them, Lucius, became a prophet in the early church there [the Greek-speaking ‘Orthodox’ Church of Antioch].[7]

These subtle, progressive socio-cultural shifts are somehow summarized succinctly in Chapter 3 of the Epistle to the Galatians:

The unique combination of ethnocultural traits inhered from the fusion of a Greek cultural base, Hellenistic Judaism and Roman civilization gave birth to the distinctly Antiochian “Eastern Mediterranean-Roman” Christian traditions of Cilicia (Southeastern Turkey) and Syria/Lebanon:

Some of the typically Antiochian ancient liturgical traditions of the community rooted in Hellenistic Judaism and, more generally, Second Temple Greco-Jewish Septuagint culture, were expunged progressively in the late medieval and modern eras by both Phanariot European-Greek (Ecumenical Patriarch of Constantinople) and Vatican (Roman Catholic) theologians who sought to 'bring back' Levantine Greek Orthodox and Greek-Catholic communities into the European Christian fold.

But members of the community in Southern Turkey, Syria and Lebanon still call themselves Rûm which means "Eastern Roman" or "Asian Greek" in Arabic. In that particular context, the term "Rûm" is used in preference to "Yāvāni" or "Ionani" which means "European-Greek" or Ionian in Biblical Hebrew (borrowed from Old Persian Yavan = Greece) and Classical Arabic. Members of the community also call themselves 'Melkites', which literally means "monarchists" or "supporters of the emperor" in Semitic languages - a reference to their past allegiance to Greco-Macedonian, Roman and Byzantine imperial rule. But, in the modern era, the term tends to be more commonly used by followers of the Greek Catholic Church of Antioch and Alexandria and Jerusalem.

Interaction with other non-Muslim ethnocultural minorities[edit]

Following the fall of the Turkish Ottoman Empire and the Tsarist Russian Empire (long the protector of Greek-Orthodox minorities in the Levant), and the ensuing rise of French colonialism, communism, Islamism and Israeli nationalism, some members of the Greek Orthodox Church of Antioch embraced secularism and/or Arab Nationalism as a way to modernize and "secularize" the newly formed nation-states of Northern Syria and Lebanon, and thus provide a viable "alternative" to political Islam, communism and Jewish nationalism (viewed as ideologies potentially exclusive of Byzantine Christian minorities).

This often led to interfaith conflicts with the Maronite Church in Lebanon, notably regarding Palestinian refugees after 1948 and 1967. Various (sometimes secular) intellectuals with a Greek Orthodox Antiochian background played an important role in the development of Baathism, the most prominent being Michel Aflaq, one of the founders of the movement.[10]

In the early 20th Century (notably during World War I), Lebanese-American writers of Greek-Orthodox Antiochian background such as Abraham Dimitri Rihbany, known as Abraham Mitrie Rihbany (a convert to Presbyterianism), popularized the notion of studying ancient Greco-Semitic culture to better understand the historic and ethnocultural context of the Christian Gospels : his original views were developed in a series of articles for The Atlantic Monthly, and in 1916 published in book form as The Syrian Christ.

At a time when most of the Arab world area was ruled by the Ottoman Empire, France and England, Rihbany called for US military intervention in the Holy Land to fend off Ottoman Pan-Islamism, French colonialism, Soviet Communism and radical Zionist enterprises- all viewed as potentially detrimental to Christian minorities.

After the death of the head of the Patriarchate of Antioch, Ignatius IV (Hazim), Patriarch of Antioch, Syria, Arabia, Cilicia, Iberia, Mesopotamia and All the Middle East, on December 7, 2012, Metropolitan Saba Esber was elected locum tenens until the election of the new patriarch. On Monday, December 17, the Holy Synod of Antioch announced[11] the election of Metropolitan John (Yazigi) as the new Patriarch, taking the name John X.

In Western Asia and North Africa:

in Asia and Oceania:

Retrieved from "https://en.everybodywiki.com/index.php?title=Greek_Orthodox_Church_of_Antioch&oldid=835267"
Categories:
Hidden categories:
This page was last edited on 4 July 2020, at 17:08.
This page has been accessed 218 times.
Content is available under License CC BY-SA 3.0 unless otherwise noted.
Privacy policy
About EverybodyWiki Bios & Wiki
Disclaimers
Mobile view