From EverybodyWiki Bios & Wiki
Jump to:navigation, search
Not to be confused with Latvian Orthodox Autonomous Church.

Orthodoxy was planted in Latvia in the 11th century, when it became a mission field of the diocese of Polotsk. The country remained mostly pagan until it was conquered in the 13th century by the Catholic Teutonic Order. Prior to this, however, part of prominent Latgalian noblemen (e. g., Visvaldis, Vetseke) and a large part of Latgalian people, in general, had converted to Orthodoxy voluntarily. There were Orthodox churches in Jersika from the evidence of the Livonian Chronicle; many church-related words came into pre-Latvian languages in that time. An Orthodox presence continued after the Teutonic Order conquest at least officially, in the form of churches for Russian merchants and others, but these were small communities among a majority of Catholics before 1525 and Lutherans afterwards.[citation needed]

After Latvia was annexed to the Russian Empire in the 18th century (most of Latvia, a result of the Great Northern War by the Treaty of Nystad, the Latgale region after the First Partition of Poland in 1772), Russian and Orthodox presence increased substantially, but the Orthodox Church remained foreign to the Latvians. The Latvian Orthodox Church as a body including ethnic Latvians as well as Russians dates back to the 1840s, when native Latvians (who were at that time subjects of the Russian Empire) petitioned Nicholas I of Russia to be allowed to conduct services in their native tongue. The Orthodox Church enjoyed some success in its missions among the Latvians due to its use of the Latvian language and by personal appeal of local Orthodox bishops who sought to support native Latvian inhabitants whose rights were limited by Baltic Germans.[1] In the 1880s the Orthodox Nativity Cathedral was built in Riga. However, it was always regarded suspiciously by the Lutheran Germanic nobles of the area; conversely the predominantly German character of the Lutheran Church in Latvia was a factor in the movement of some 40,000 Latvians from the Lutheran to the Orthodox Church. When religious freedom was proclaimed in 1905, about 12,000 Latvians moved from Orthodoxy to Lutheranism; in most cases, this seems to have occurred because of mixed marriages and the difficulties of maintaining a religiously divided family.[citation needed] 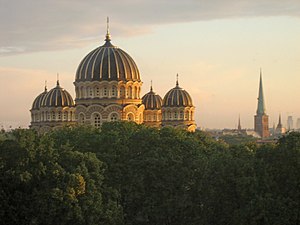 The domes of Nativity Cathedral are a landmark of the Riga cityscape.

During World War I, the property of the Orthodox Church in Latvia was confiscated by occupying German forces, and in the early years of independent Latvia the government was not eager to recognize the church, suspecting it of being a hotbed of pro-Russian monarchism.[citation needed]

In this difficult situation, Jānis (John) Pommers, a native Latvian, was appointed Archbishop of Riga in 1921.[citation needed]

Pommers succeeded in winning recognition from the government by 1926 and, against much opposition from leftists and others, in stabilizing the situation of the church. While opposing the Bolsheviks, he maintained the Latvian Orthodox Church within the Moscow Patriarchate. In 1934, he was assassinated by Soviet agents (some believe these were agents of the nationalist dictator of Latvia, Kārlis Ulmanis).[citation needed]

The autonomy of the Latvian Orthodox Church was ended abruptly by the Soviet occupation of Latvia in 1940, which was followed by the German Nazi occupation from 1941 to 1944, and a second Soviet annexation lasting from 1944 to 1991. The church suffered oppression during this period, as did organized religion throughout the Soviet Union, though this was partly mitigated from 1943 to 1948 (due to the support of the Church during World War II) and in the last years of the Soviet Union under Mikhail Gorbachev.[citation needed]

On 24 February 1941, after the Soviet invasion of Latvia, the Russian Orthodox Church turned the territory of the Latvian Orthodox Church into an exarchate of the ROC which comprised the territories of Estonia and Latvia. Metropolitan Augustine of Riga and all Latvia, primate of the LOC, was summoned to Moscow where he was forced, on March 28, 1941, to sign a decree recognizing the situation. On 31 March 1941, the ROC officially abolished the autonomy of the Orthodox church of Latvia.[2]

During the occupation of Latvia by Germany, Metropolitan Augustine on 20 July 1941 declared the reestablishment of the LOC. However, many parishes did not join Augustine, and the Germans were supporting the Russian exarchate.[2]

In 1944, after the Soviet re-occupation of Latvia, Metropolitan Augustine and numerous members of the LOC were forced to go in exile in West Germany. There, a Synod in exile was created. The Ecumenical Patriarchate continued to recognize the LOC, even after Augustine's death.[2]

The church also suffered oppression in the last years of the Soviet Union under Mikhail Gorbachev. In December 1992, the Latvian Orthodox Church was again proclaimed autonomous, preserving canonical ties with the Russian Orthodox Church.[citation needed]

In 2001, a council of the Latvian Orthodox Church canonised Archbishop Jānis in recognition of his martyrdom in 1934.[3] In 2006, the "Order of the holy martyr Jānis" was instituted to reward those who have served the Orthodox Church and its aims.[4]

In modern Latvia, there are 350,000 Orthodox Church members.[5] The services are in Church Slavonic and the members are predominantly Russian speakers. Ethnic Latvians are a minority among church members; there are parishes with services in Latvian in Riga, Ainaži, Kolka, Veclaicene and in other places.[citation needed]

Other Orthodox Christian groups in Latvia[edit]

Besides the Patriarchate-affiliated church, Latvia has a number of Old Believer Orthodox Christian communities as well. The priestless congregation of the Grebenstchikov House of Prayer in Riga, affiliated with the Pomorian Old-Orthodox Church, is considered the oldest extant Old Believer congregation in the world.[6] The Latvian Orthodox Autonomous Church, a part of the Russian Orthodox Autonomous Church (True Orthodox),[7][8] is also present in Latvia.[9][10][11]

Retrieved from "https://en.everybodywiki.com/index.php?title=Latvian_Orthodox_Church&oldid=818835"
Categories:
Hidden categories:
This page was last edited on 18 June 2020, at 12:37.
This page has been accessed 241 times.
Content is available under License CC BY-SA 3.0 unless otherwise noted.
Privacy policy
About EverybodyWiki Bios & Wiki
Disclaimers