Orthodox Church of the Czech Lands and Slovakia

Orthodox Church of the Czech Lands and Slovakia[edit]

The Orthodox Church of the Czech Lands and Slovakia (Czech: Pravoslavná církev v Českých zemích a na Slovensku; Slovak: Pravoslávna cirkev v českých krajinách a na Slovensku) is a self-governing body of the Eastern Orthodox Church that territorially covers the countries of the Czech Republic and Slovakia. Archbishop Rastislav of Prešov was elected by the Extraordinary Synod held on January 11, 2014, as the new primate.[2] On December 9, 2013, the Synod removed Archbishop Simeon (Jakovlevic) of Brno and Olomouc from his position as Locum Tenens (ad interim administrator following the resignation of the previous primate, Archbishop Krystof, over allegations of sexual relations with women),[3] and appointed Archbishop Rastislav in his place,[4] an action against which Archbishop Simeon protested[5] and which was deplored by Patriarch Bartholomew I of Constantinople.[6]

Church of St Gorazd in Olomouc

The Church of the Czech Lands and Slovakia presents both an ancient history as well as a very modern history. The present-day church occupies the land of Great Moravia, where the brothers Ss. Cyril and Methodius began their mission to the Slavs, introducing the liturgical and canonical order of the Orthodox Church, translated into the Church Slavonic language, using mostly Greek calques to explain concepts for which no Slavic term existed.[7]:192 In doing this they developed the first Slavic alphabet, a mixture of Greek and Hebrew-based characters with a few invented characters of their own to represent unique Slavic sounds.[7]:190:191

This was done at the express invitation of the powerful ruler Rastislav of Moravia. Yet within the Moravian state there was a Frankish party among the nobility who desired closer ties with the Kingdom of Francia, whose ruler, Louis the German, was Ratislav's nominal suzerain, and a Frankish bishop had ecclesiastical jurisdiction over a small part of Ratislav's domain that had earlier converted to Christianity. Despite the Photian Schism, the churches of Rome and Constantinople still preserved some semblance of unity, and Pope Nicholas I did not want to see the formation of a large independent Frankish church in Central Europe. When an appeal of the ecclesiastical issue was made to Rome, Nicholas summoned both Cyril and Methodius and the complaining Frankish parties to his court to hear them out. Nicholas died before their arrival, but the new Pope Adrian II reached a compromise after hearing both sides: Old Church Slavonic was confirmed as a liturgical language alongside Greek, Hebrew and Latin, and Methodius was confirmed as bishop with a Frankish co-adjutor, Wiching. Adrian was convinced by Cyril's impassioned defence of the Slavic liturgy in which he cited 1 Corinthians 14:19 "Yet in the church I had rather speak five words with my understanding, that by my voice I might teach others also, than ten thousand words in an unknown tongue." Cyril fell ill while the brothers were still at Rome, and on his deathbed he asked Methodius to swear to return to Moravia and complete the mission to the Slavs instead of returning to the monastic life on Mount Olympus as he had intended to do.[7]:192–4

Methodius kept his word and returned, but his mission was interrupted by the death of Ratislav, as the new ruler, Svatopluk I of Moravia sided with the pro-Frankish party and had Methodius imprisoned for almost three years, until he was freed through the intercession of Pope John VIII. For the next ten years, Methodius continued his work, but the death of John VIII in 882 removed his papal protection, and Methodius died in 885. After this, Pope Stephen V of Rome confirmed his Swabian co-adjutor Wiching as bishop.[8] Methodius's disciples were imprisoned, expelled to Bulgaria, like Gorazd and many others, or enslaved. The expelled, led by Clement of Ohrid and Naum of Preslav, were of great importance to the Orthodox faith in the already Christian from year 864 Bulgaria, after they were released from prison and escorted to the Danube.[7]:197 In AD 870 the Fourth Council of Constantinople granted the Bulgarians the right to have the oldest organized autocephalous Slavic Orthodox Church that little later, from autonomous Bulgarian archbishopric, became patriarchate. Major event that strengthens the process of Christianization was the development of the Cyrillic script in Bulgaria at the founded by Naum and Clement Preslav Literary School in the 9th century. The Cyrillic script and the liturgy in Old Church Slavonic, were declared official in Bulgaria in 893.[9][10][11] 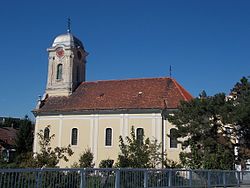 Eastern Orthodox Church in Komárno (Slovakia), built in the middle of the 18th century under jurisdiction of the Serbian Orthodox Eparchy of Buda

The Eastern Orthodox ecclesiastical order survived in present-day eastern Slovakia and neighboring regions due to its nearness and influence to Kievan Rus, especially among the population of Rusyn people, until the middle of the 17th century when the Union of Uzhhorod was brought about in the Kingdom of Hungary. During the times of suppression, remaining Eastern Orthodox Christians from the region kept their ties with neighboring Eastern Orthodox Eparchy of Buda of the Serbian Patriarchate of Peć and later with the Metropolitanate of Karlovci. One of the most northern parishes of the Serbian Orthodox Church existed in the Slovak city of Komárno with local church built in the 18th century still standing today.[12]

Among those seeking to restore ties with Eastern Orthodox Church was a Catholic priest Matěj Pavlík, who had been interested in Eastern Orthodoxy for years. The Serbian Orthodox Church thus consented to receive him in full communion and he became Archimandrite with the name Gorazd, in honor of Saint Gorazd of Moravia, disciple and successor of Saint Methodius, Archbishop of Moravia. On September 25, 1921, Archimandrite Gorazd was consecrated Bishop of Moravia and Silesia at the Cathedral of the Holy Archangel Michael in Belgrade, Yugoslavia, by Serbian Patriarch Dimitrije. Bishop Gorazd received jurisdiction over Czech Lands.[14]

As the Orthodox leader in the new nation of Czechoslovakia, Bishop Gorazd laid the foundations of the Orthodox Church throughout Bohemia, Moravia, and also into Slovakia. In Bohemia, he oversaw the building of eleven churches and two chapels. He also published the essential books for the conduct of church services that were translated in the Czech language. He provided aid to those in Slovakia and Carpathian Rusynia, which then was part of Czechoslovakia, and who wanted to return to Eastern Orthodox faith from the Union with Rome. Thus, in the interwar period, Bishop Gorazd built the small Czech church that during World War II would show how firmly it was connected to the Czech nation.[15]

By 1931, Eastern Orthodox renewal in eastern Slovakia and Carpathian Rusynia was progressing very well, allowing the creation of the second Diocese that was named: Eparchy of Mukačevo and Prešov.[16] That diocese was also created under the auspices of Serbian Orthodox Church. First bishop of Mukačevo and Prešov was Damaskin Grdanički.[17] In 1938, he was succeeded by Bishop Vladimir Rajić.

In 1938, the Third Reich succeeded in annexing the Sudetenland from Czechoslovakia during the Munich Conference. In the same year, after First Vienna Award, southern parts of Slovakia and Carpathian Rusynia were annexed by Hungary. Since the city of Mukačevo was taken by Hungary, bishop Vladimir had to move to the city of Khust. In 1939, the Third Reich annexed the remainder of the Czech lands into the Protectorate of Bohemia and Moravia and installed a pro-Nazi regime in Slovakia. In the same time, Hungary occupied the rest of Carpathian Rusynia and in 1941 Hungarian authorities arrested bishop Vladimir Rajić and deported him back to Serbia.

Years of Nazi occupation (1938/9-1944/5) were marked by renewed restrictions and persecutions.[18] By 1942, Reinhard Heydrich, architect of the Final Solution, had become governor of the Czech Protectorate. After the May 27, 1942 assassination attack on Heydrich's car in Prague, Czech partisans took refuge in the crypt of the Ss. Cyril and Methodius Cathedral before continuing their escape. They were aided by senior church laymen, who kept Bishop Gorazd informed. However, their presence was discovered by the Nazis, and on June 18 the Nazis attacked their hiding place in the cathedral, forcing them to commit suicide. The Orthodox priests, laymen, and Bishop Gorazd were arrested and killed by firing squads on September 4, 1942.[19]

In reprisal the Nazis forbade the church to operate in Bohemia and Moravia.[20] Churches and chapels were closed, and a rounding up of Czechs was conducted, including the whole village of Lidice, whose inhabitants were either killed or sent to forced labor camps.[21] For the Orthodox the whole church fell under the Nazi persecution and was decimated. A total of 256 Orthodox priests and laymen were executed, and church life came to a stop.[22]

After World War II the Orthodox Church in Czechoslovakia began its recovery without its bishop. On December 9, 1951, the Patriarch of Moscow granted autocephaly to the Orthodox Church of Czechoslovakia, though this action was not recognized by Constantinople, which regarded the Czechoslovak church as being autonomous under its authority. The Patriarch of Constantinople later issued a Tomos, or official proclamation, of autocephaly in 1998.[23]

When the Communists seized the country in April 1950, the government convoked a synod of the Greek Catholic Church at Prešov, at which five priests and a number of laymen signed a document declaring that the union with Rome was disbanded and asking to be received into the jurisdiction of the Moscow Patriarchate, later the Orthodox Church of Czechoslovakia. The government then transferred control of the Greek Catholic churches and other property to the Orthodox Church.

During the Prague Spring in 1968, the former Greek Catholic parishes were allowed to restore communion with Rome. Of the 292 parishes involved, 205 voted in favor. This was one of the few reforms by Dubček that survived the Soviet invasion the same year. However, most of their church buildings remained in the hands of Orthodox Church. After communism was overthrown in the 1989 Velvet Revolution, most of the Church property was returned to the Slovak Greek Catholic Church by 1993.

The martyrdom of Bishop Gorazd was recognized by the Serbian Orthodox Church on May 4, 1961, which canonized Gorazd as a New Martyr. Subsequently, on August 24, 1987, he was canonized at the Cathedral of St. Gorazd in Olomouc, Moravia.[24]

After the death of Metropolitan Dorotheus of Prague and All Czechoslovakia, Archbishop Nicholas of Prešov was elected the new metropolitan, and the church's primatial see was moved from Prague to Prešov. Metr. Nicholas reposed[clarification needed] on January 30, 2006, and was replaced by Archbishop Christopher of Prague and the Czech Lands (elected May 2, 2006).

In the Czech Republic there are 82 parishes, with 51 in Bohemia and 31 in Moravia and Silesia. In the Republic of Slovakia there are 90 parishes, with 69 in the eparchy of Prešov and 21 in the eparchy of Michalovce. The Orthodox Theological Faculty of the University of Prešov provides an education for future priests of combined Church. The faculty maintains a detached[clarification needed] branch in Olomouc.

The Monastery of St. Procopius of Sazava is located in Most, and that of the Dormition in Vilemov.

The current primate of the Czechoslovak Orthodox Church is Rastislav of Prešov [cs] (born Ondrej Gont), Metropolitan of the Czech Lands and Slovakia since 2014.

Retrieved from "https://en.everybodywiki.com/index.php?title=Orthodox_Church_of_the_Czech_Lands_and_Slovakia&oldid=802861"
Categories:
Hidden categories:
This page was last edited on 12 June 2020, at 16:58.
This page has been accessed 143 times.
Content is available under License CC BY-SA 3.0 unless otherwise noted.
Privacy policy
About EverybodyWiki Bios & Wiki
Disclaimers
Mobile view