Nadjé Antoinette Leslie (born April 23, 1993)[1] is a professional violinist and recording artist[2][3][4]. Leslie is undoubtedly one of Jamaica’s most outstanding young musicians[5][6][7] advancing to the World Stage in 2006 after winning the enviable title “Junior Instrumental Grand Champion of the World” in Hollywood, California at the World Championships for Performing Arts. During the competition she received gold medals and a special Industry award.[8] Since then, she has performed for several heads of state including Prince Charles and Prince Harry on their visits to Jamaica. She continues to mesmerize audiences with her outstanding talent as she effortlessly plays on many contemporary rhythms, from the hypnotic reggae, smooth jazz and classical idioms to thrill audiences all over the world.

After the passing of her mother in August 2010, Leslie and her family faced many challenges. Sheer determination and dedication to her craft kept her going despite the many obstacles that arose. Leslie spent the year of 2011 teaching violin at a children's home which gave her a renewed sense of purpose and motivation to keep pushing to conquer life and to do great things. In 2012 Leslie received a full-tuition scholarship from the Jamaican CHASE Scholarship Foundation[9] to attend Hunter College in New York City to pursue a Bachelor’s of Music Degree. Once in New York however, Leslie faced new obstacles and spent many cold, late nights busking in the underground subway to earn money for school books, etc. Leslie, with the help of family and many friends overcame the odds and is now a well-known performer who continues to perform worldwide. According to Leslie: “Music is my heart’s passion! My release & happy place. No matter how many other things I enjoy doing, nothing compares to the feeling of being on stage… the adrenaline rush, the lights – NOTHING LIKE IT! There are defining moments in each person’s life that I believe shape our destiny. For me, the first time I got on stage with my violin to a captivated audience directed my journey to where I am today. I look forward to releasing more great music, collaborating with other talents and entertaining audiences doing what I LOVE!”[10]

She fell in love with performing at a young age having been exposed and trained in dance, drama and of course, music.

She began taking classical violin lessons at Mona Preparatory School under the tutelage of Dr. Lisa Walker in 2000 at seven (7) years old. Walker: "I discovered Nadjé Leslie when she was 7 years old at Mona Preparatory School in Kingston, Jamaica. I selected Nadjé from a group of 75 students to learn to play the violin in a small pilot group. She showed an unusual acuity for music even as a beginner. Her musicality was mature for her level and her rapid progress demonstrated her dedication to learning to play the violin. I can confirm that (her) talent falls within the top 1% of students I have coached worldwide."

Leslie states that "Music came naturally to me! It runs in the family. My dad's a musician, my brother's a musician... It just runs through my veins."

In 2003 Nadjé Leslie started training with Paulette Bellamy, OD. Leslie attributes most of her musical style today to Bellamy, who arranged and composed all of the songs on Leslie's debut album: Nadjé Violin Girl In Jamaica, Volume 1 (2007). She has trained with both Paulette Bellamy and Dr. Lisa Walker since then.

Bellamy describes Nadjé Leslie as "an outstanding student (who) has become a unique performer with special mastery of difficult rhythms and interpretation in Classical, Reggae, Gospel, Folk and Pop Genres."

Leslie trained with the ESOR Dance Ensemble for many years.[13][14] This professional dance teaching helped to groom Leslie into the diverse performer she is today. Leslie's performances has been described by The Gleaner newspaper as "she dances to her own beat, feeding the audience with her energy"[15]

Nadjé Leslie was deemed an alien of "Extraordinary Ability" by the United States government in July 2019 and has since made a name for herself as a performing artist, recording artist and violin teacher in the New York/Tri-state area. Her younger brother Kadeem Leslie, managing her brand: "Nadjé Violin"[16]

Leslie has an impressive repertoire spanning music from the Reggae, Classical, Dancehall, Folk, Pop, Gospel, Rock, R&B and EDM genres. She also possesses the ability to play-by-ear, developed through her many years playing with her father, Michael on piano and with her church band. Leslie has performed for hundreds of weddings, parties, clubs, stadiums and special events (graduations, anniversaries, ceremonies, proposals, church events, etc...) over the years. See "Notable Performances" below for a list of Leslie's most notable shows.

A fusion of Electronic Dance Music mixed with Reggae and a hint of Latin and Afro-Cuban styles celebrating the spirit of the Holidays.

Nadjé Leslie after performing, greets Prince Charles of Wales and the Duchess of Cornwall (2008) 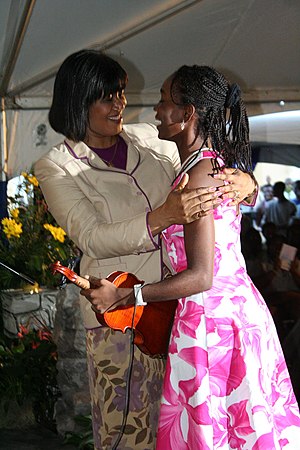 • Soloist with the Jamaica Symphony Orchestra 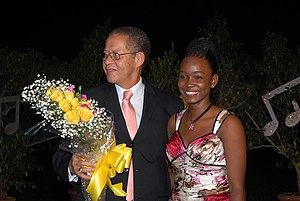 …Prime Minister Bruce Golding, who officially launched Violin Girl in Jamaica, Vol. 1, said "I first heard Nadjé… went up there and put on a performance that was out of sight… I have been one of Nadjé's most fanatic fans since then," Golding said. "It is not just her music that is beautiful and infectious, but the personality that she infuses in the music. She is enjoying her performance as much as she enjoys giving it to us." And he noted that while "When young people become celebrities so early in life some of the time they go ballistic, she is so composed, so modest, so pleasant. She knows that she has a talent but does not consider herself better than anyone else. She has been taught by Paulette Bellamy but she has been nurtured by her parents". Jamaica's greatest asset "I think she is going to be one of Jamaica's greatest assets," Golding said, before Nadjé presented a copy of the album to him…

…Moto Perpetuo ('Perpetual Motion') was delightfully executed by violinist Nadje Leslie. The opening ascending scale set the pace for what would be a piece of continuous quick movement, with only a slight reprieve midway through, before the reprise. Leslie's excellent bow control, with the player sometimes having to execute entire phrases in one bow stroke, her dexterity of fingers, precise intonation, the musical attack of the phrases supported by the staccato piano accompaniment, along with the cadenza-like codetta, coalesced into an excellent and memorable performance….Leslie's Evening Time was done to a gentle rumba, accompanied by keyboard, bongo drums and shakers. The medley of Jamaican folk songs, arranged by Paulette Bellamy, which followed, were enriched by Kumina rhythms, decorative passages and pizzicato phrases and enlivened by pulsating rhythms that at one time had Leslie doing some dinkimini steps during Mango Time...

…CHASE scholarship awardee Nadje Leslie performing at – ‘A Classical Evening With CHASE’ – at the Jamaica Pegasus Hotel last Sunday, July 20…Many who knew her from her teen years, was more than  surprised  to see how young violinist Nadje′ Leslie was blossoming into a confident artiste as she continues to pursue studies for her Bachelor of Music degree at the Hunter College in New York City.  Nadjé performed John Halvorsen’s ‘Passacaglia’ (on a theme by Handel), and ‘Piece En Forme De Habanera’ by Maurice Ravel accompanied by Micah Holness on Cello and Zoe Brown on Flute…

…14-year old violinist Nadjé Leslie, did a selection of reggae, jazz and folk interpretations. Consul General Ricardo Allicock commended the performers for their outstanding display of the country’s rich cultural heritage through song, dance and drama. According to the Consul General, the various creative and artistic expressions from traditional folk through to contemporary form were a reminder of Jamaica’s proud and rich history, of which all nationals should be proud...

… This is an original programme from the Kiwanis Club of Kingston, geared towards Identifying and recognizing young persons between the ages of 13 and 25 years who have achieved excellence in the areas of Leadership, Academics, Sports or the Arts and there is also a special category for Bravery. Excellence is defined by the quality of the achievement and the impact it has had at the school, the community or the national level… Nadjé Leslie, noted violinist and multiple gold medal winner at JCDC Festival competitions and winner of the Junior Instrumental Grand Champion of the World…

…  violinist Nadjé Leslie, who played Rucumbine and Don't Worry. The young woman danced to her own beat, feeding the audience with her energy…

… The Who's Who's within New York's Jamaican Diaspora, turned out in their fineries to celebrate the island's 53rd year of Independence at the annual Jamaica Independence Grand Ball held on Saturday, August 15th at the New York Hilton hotel in the heart of New York City… The packed house was treated to a stellar presentation by violinist, Nadje Leslie…

Retrieved from "https://en.everybodywiki.com/index.php?title=Nadjé_Leslie&oldid=936554"
Categories:
Hidden categories:
This page was last edited on 9 August 2020, at 13:49.
This page has been accessed 276 times.
Content is available under License CC BY-SA 3.0 unless otherwise noted.
Privacy policy
About EverybodyWiki Bios & Wiki
Disclaimers
Mobile view