At age 18, she moved to New York City where she studied at Parsons School of Design.[citation needed]

In 2016, Cuso made appearances in the reality series Keeping Up With the Kardashians. In early February 2018, Cuso's Fall/Winter design illustrations and inspiration were covered by The Cut, the fashion edition of New York (magazine).[1][2] 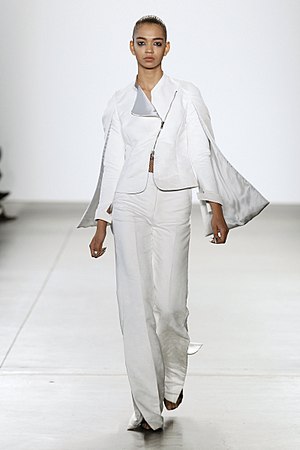 In February 2018, Cuso went by her last name as an abbreviation to create a ready-to-wear collection with JXY. [3]The collection introduced the "cobblestone dress", a new design concept which adhered to the faux leather policy held by the Chelsea Piers, Pier 59 Studios, an Official New York Fashion Week venue.[4][5] The collection was co-designed with Jaxon Yang, named Jxy n' Cuso, and released in the Fall of 2018 at New York Fashion Week.[6] The label launched with embellished hoodies, structured blazers with crystallized embellishments, and tailored high slits.[7] Cuso’s "soft yet edgy pieces, from slip dresses to leather fringe coats," emerged as defining principles.[8]

Others articles of the Topics Fashion AND New York City : Lord & Taylor

This article "Nina Cuso" is from Wikipedia. The list of its authors can be seen in its historical and/or the page Edithistory:Nina Cuso. Articles copied from Draft Namespace on Wikipedia could be seen on the Draft Namespace of Wikipedia and not main one.

Share
Retrieved from "https://en.everybodywiki.com/index.php?title=Nina_Cuso&oldid=938741"
Categories:
Hidden categories:
This page was last edited on 10 August 2020, at 00:49.
Content is available under License CC BY-SA 3.0 unless otherwise noted.
This page has been accessed 1,876 times.
Privacy policy
About EverybodyWiki Bios & Wiki
Disclaimers