Paroles is a feature-length documentary film in the form of interview, composed of a series of conversations with Jean Rouch, filmed by Ricardo Costa at the Musée de l'Homme in Paris, between April and May 1998.

In Paroles, together with Rouch, are two key figures from the team of the Ethnographic Film Committee of the Musée de l'Homme, Germaine Dieterlen, a fellow of Marcel Griaule in research in the 1930s and Brice Ahounou, then “(…) a young collaborator who led for some time the "Sessions of Wednesday" at the cinema hall of the museum of Palais de Chaillot, where were screened, followed by a debate, films on the phenomena of the trance and the possession (Cit. article published at the French newspaper L'Humanité [1]).

Traditional African cultures and those of ancient Greece. The myth of the fox in Dogon country. Mythologies and their relatedness: Africa, Europe, Middle East, Japan.[4] Surrealism and creativity.

Germaine Dieterlen refers to possession by the mask or the trance. The fox, master of disorder or the creative man. The Apollonian spirit and the Dionysian spirit as opposing attitudes in the culture of the West. The universality of myth.

Possession, ritual practice, phenomenon studied by Freud and well known by Christianity. Ecstasy and demonic possession. The trance, a body technique legated by Africa to Brazil and the Americas. The historical and social system engendered by colonialism and bypassed by Africa. Links of blood and culture: miscegenation and the spiritual legacy of blackness. Music and rhythm: the slaves of Brazil and of the United States. The blues.

Traditional African cultures. Mythologies and their relatedness : Africa, Europe and the Middle East. The role of the mask in the theater of origins.

Possession through the mask or the trance. The Dogon myth of the Pale Fox, the creative Man. Human migrations and the universality of the myth.

The populations of West Africa [6] before the fifteenth century. Elmina and the role of the Portuguese and the colonial expansion. The Atlantic slave trade, the spread of Orisha and Voodoo cultures from Africa to the Americas. Miscegenation, cultural symbiosis, return movements.

Possession, ritual practice known by Christianity : ecstasy and demonic possession. The trance, technique of the body, pagan practice current in Africa, Brazil and the Americas.

Historical and social system engendered by colonialism and bypassed by Africa. Links of blood and culture: miscegenation and spiritual legacies of negritude. Music and rhythm: El Salvador songs and New Orleans jazz.

NOTE : the long version of Paroles corresponds to the first editing of the film made in 1998. 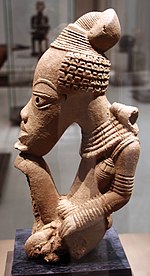 Retrieved from "https://en.everybodywiki.com/index.php?title=Paroles_(film)&oldid=942563"
Category:
Hidden categories:
This page was last edited on 10 August 2020, at 23:58.
This page has been accessed 298 times.
Content is available under License CC BY-SA 3.0 unless otherwise noted.
Privacy policy
About EverybodyWiki Bios & Wiki
Disclaimers