Paul McMillian Davis Jr. (September 1, 1919 – February 12, 2007), also known as Mac Davis but unrelated to the singer Mac Davis, was an orthopedic surgeon, medical writer, and in his later years, a real estate developer in Alexandria, Louisiana.

Davis was born in Ruston, the seat of government of Lincoln Parish in North Louisiana to Dr. Paul M. Davis Sr. and the former Lilleymae Sentell (1895–1981). He earned his undergraduate degree from Louisiana Tech University in Ruston. From 1944 to 1945, Davis was a captain in the United States Army Medical Corps in the European theater of World War II. He also served in the Korean War.[1]

In 1951, having relocated to Alexandria, Davis married the former Frances "Fran" Bolton (November 30, 1928 – January 5, 2016),[1][2] the younger daughter of Alexandria banker James Calderwood Bolton and the former Frances Sample (1902–1986). Frances Bolton was a niece of Robert H. Bolton, another Alexandria banker-businessman, and his first wife, Peggy Bolton. A graduate of Bolton High School and Randolph-Macon Woman's College in Lynchburg, Virginia, Frances received a Doctorate of Humane Letters from Centenary College in Shreveport.[2] She was a founding member of the foundation of Louisiana State University at Alexandria, which her father had been influential in establishment. The LSUA library is named in his honor. She was a director of the Bolton family's former Rapides Bank and Trust Company. Over many years, she has been active in the Central Louisiana Community Foundation, the Alexandria Museum of Art, Rapides Symphony Orchestra, the River Oaks Square Art Center, the Central Louisiana Arts Council, the Alexandria-Pineville YWCA and the United Way of America.[3] After college, Frances Bolton from 1949 to 1952 worked as a bookkeeper at her family's Rapides Bank, established by her grandfather and located at the time in a limestone building downtown that now houses the Alexandria Museum of Art. "There were not any computers then; so I did all the bookkeeping by hand," Davis recalled in a 2010 interview. While working at the bank, a mutual friend, businessman Harry B. Silver (born January 1922), a later long-term member of the Alexandria City Council, introduced her to Dr. Davis.[4]

Two months after the Davises married, he was called back into military service to Osaka, Japan, still occupied by Allied forces after the war. Mrs. Davis was allowed to join her husband in Japan: "We were in Japan for about one and a half years. We rented a house that was a former officer's house and borrowed furniture. We later moved to military quarters." She maintained friendships from people in Japan for many years thereafter.[4] In 1953, Dr. Davis was awarded the Bronze Star by the Far East Command.[1]

After his graduation from the Tulane University School of Medicine in New Orleans, Davis completed his orthopedic residency at Charity Hospital of New Orleans (known as "Big Charity"). He was on the staff at both Alexandria hospitals, Rapides Regional Medical Center (formerly the Baptist Hospital) and the Roman Catholic-affiliated Christus St. Frances Cabrini Hospital. For a time, he had been a clinical professor of orthopedics at Tulane Medical School.[1]

Dr. Davis was a volunteer orthopedic consultant at the Huey P. Long Medical Center, a former charity hospital in Pineville, the Alexandria Veterans Administration Hospital, located in Pineville, and the Rapides Parish Handicapped Children’s Clinic in Alexandria, for which he often provided invaluable assistance to children with special needs. Davis was a member of the Rapides Parish Emergency Medical Board.[1]

Dr. and Mrs. Davis were donors to the Republican Party, including Bobby Jindal, who was elected governor of Louisiana in 2007 and 2011, and the unsuccessful congressional race waged in 2004 by former State Representative Jock Scott of Alexandria, who was prior to his death an LSUA history professor.

Davis and his wife served actively in various capacities for the First United Methodist Church of Alexandria. He was a board member of the Methodist Children’s Home, an orphanage in Ruston. He sat on the board too of the former Rapides Bank and Trust Company once owned by the Bolton family. Rapides Bank later became a part of Bank One Corporation. Davis was a member of Kiwanis International.[1]

In 1990, the Davises entered into the field of real estate and established "The Lake District", a multi-phase development, still underway, located along Louisiana Highway 28 West, also known as the Leesville Highway. The Davises lived in the district.[1][4]

Retired from active medical practice, Davis died at his residence. He was preceded in death by his parents and two sisters, Martha Davis Plummer of Bossier City, who was married to the late James B. Plummer Jr.,[1] and Lilleybeth Davis Webb (1930–2007) of Colorado Springs, an artist and the widow of Earl A. Webb. Lilleybeth died fifteen days before the passing of her brother.[5] 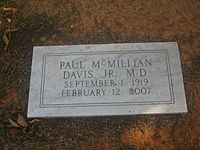 Share
Retrieved from "https://en.everybodywiki.com/index.php?title=Paul_M._Davis_Jr.&oldid=943260"
Categories:
Hidden categories:
This page was last edited on 11 August 2020, at 05:42.
Content is available under License CC BY-SA 3.0 unless otherwise noted.
This page has been accessed 1,026 times.
Privacy policy
About EverybodyWiki Bios & Wiki
Disclaimers