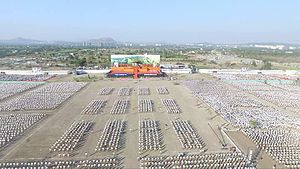 Program held in Maharashtra by the RSS

Shiv Shakti Sangam was a historic gathering of swayamsevaks of Rashtriya Swayamsevak Sangh of Western Maharashtra on January 3, 2016. Over 85,044 swayamsevaks participated in this event. RSS Sarsanghchalak, Mohanji Bhagwat addressed the gathering. He exhorted the assembled audience to realize the necessity of equality for the progress of the nation.[1]

The event was historic for many reasons, one of which was that Jyotirao Phule's fourth and fifth generation attended this event.[2]

Retrieved from "https://en.everybodywiki.com/index.php?title=Shiv_Shakti_Sangam&oldid=960632"
Categories:
Hidden categories:
This page was last edited on 17 August 2020, at 05:38.
This page has been accessed 135 times.
Content is available under License CC BY-SA 3.0 unless otherwise noted.
Privacy policy
About EverybodyWiki Bios & Wiki
Disclaimers