From EverybodyWiki Bios & Wiki
Jump to:navigation, search
This article is about the Indian actress. For other uses, see Nargis (disambiguation).

Nargis Dutt[3] (born Fatima Rashid; 1 June 1929 – 3 May 1981),[4] also known by her stage name Nargis,[5] was an Indian film actress, who starred in classic films of Bollywood. Regarded as one of the greatest actress in the history of Hindi cinema, she made her screen debut in a minor role at the age of 5 with Talash-E-Haq (1935), but her acting career actually began with the film Tamanna (1942).

In a career that spanned three decades, Nargis appeared in numerous commercially successful as well as critically acclaimed films, many of which featured her alongside actor Raj Kapoor. She was the younger sister of the well-known actor Anwar Hussain. Her best-known role was that of Radha in the Academy Award-nominated Mother India (1957), a performance that won her the Filmfare Award for Best Actress. She would appear infrequently in films during the 1960s. Some of her films of this period include the drama Raat Aur Din (1967), for which she received the inaugural National Film Award for Best Actress.

Nargis married her Mother India co-star Sunil Dutt in 1958. Together they had three children, including the actor Sanjay Dutt. Along with her husband, Nargis formed the Ajanta Arts Culture Troupe which roped in several leading actors and singers of the time and held stage shows at border areas. In early 1970s, Nargis became the first patron of The Spastic Society of India and her subsequent work with the organisation brought her recognition as a social worker and later a Rajya Sabha nomination in 1980.

Nargis died in 1981 of pancreatic cancer, only three days before her son Sanjay Dutt made his debut in Hindi films with the film Rocky. In 1982, the Nargis Dutt Memorial Cancer Foundation was established in her memory. The award for Best Feature Film on National Integration in the Annual Film Awards ceremony is called the Nargis Dutt Award in her honor.

Nargis was born as Fatima Rashid in Calcutta, Bengal Presidency, British Indian Empire (now Kolkata, West Bengal, India) in a Punjabi Muslim family. Her father Abdul Rashid, formerly Mohanchand Uttamchand ("Mohan Babu"), was originally a wealthy Punjabi Hindu heir from Rawalpindi, Punjab Province who had converted to Islam.[3][1][6][7] Her mother was Jaddanbai, a Hindustani classical music singer and one of the early pioneers of Indian cinema.[8] Nargis' family then moved from Punjab to Allahabad in Uttar Pradesh. She introduced Nargis into the movie culture unfolding in India at the time. Nargis' maternal half-brother, Anwar Hussain (1928–1988), also became a film actor. 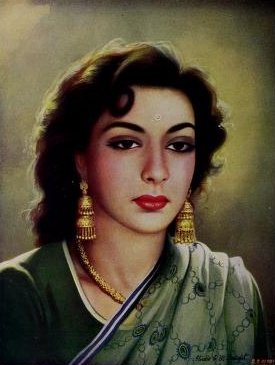 Portrait of Nargis from Jan Pahechan

Fatima made her first film appearance in the 1935 film Talashe Haq when she was six years old, credited as Baby Nargis. Nargis (نرگس [ˈnərɡɪs]) is a Persian word meaning Narcissus, the daffodil flower. She was subsequently credited as Nargis in all of her films.

After her marriage to Sunil Dutt in 1958, Nargis gave up her film career to settle down with her family, after her last few films were released. She made her last film appearance in the 1967 film Raat Aur Din. The film was well received and Nargis' performance as a woman who has dissociative identity disorder was critically acclaimed. For this role she won a National Film Award for Best Actress and became the first actress to win in this category. She also received a Filmfare Best Actress Award nomination for this film.[citation needed]

In 2011, Rediff.com listed her as the greatest actress of all time, stating, "An actress with range, style, grace and an incredibly warm screen presence, Nargis is truly a leading lady to celebrate."[11] M.L. Dhawan from The Tribune said, "In almost all her films Nargis created a woman who could be desired and deified. The charisma of Nargis's screen image lay in that it oscillated between the simple and the chic with equal ease."[12]

She was also nominated to the Rajya Sabha (Upper house of Indian Parliament) from 1980–81[4][13] but due to cancer she fell ill and died during her tenure.[14] 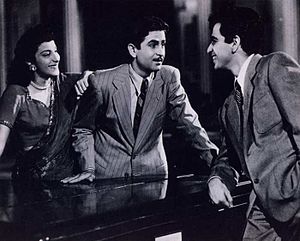 Nargis, Raj Kapoor and Dilip Kumar in a scene from the film Andaz (1949)

Nargis had a long-time relationship with actor Raj Kapoor, who was her co-star in the films Awara and Shree 420. Raj Kapoor was married and had children. After he refused to divorce his wife, Nargis ended their nine-year-long relationship.[15][16][17]

Nargis married actor Sunil Dutt (a Punjabi Hindu from Jhelum district, British India) on 11 March 1958. Reportedly, Dutt had saved her life from a fire on the sets of Mother India.[18] They married on 11 March 1958.[19] She converted to Hinduism on her marriage.[20] Three children were born from their union: Sanjay, Namrata, and Priya.

Sanjay went on to become a successful film actor. Namrata married actor Kumar Gaurav, son of veteran actor Rajendra Kumar who had appeared alongside Nargis and Sunil Dutt in Mother India. Priya became a politician and a Member of Parliament (Lok Sabha).[18]

With her husband, Nargis formed the Ajanta Arts Cultural Troupe, which involved several leading actors and singers of the time, and performed at remote frontiers to entertain the Indian soldiers at border. It was the first troupe to perform in Dhaka, after the liberation war of Bangladesh in 1971.[21] Later, Nargis worked for the cause of spastic children. She became the first patron of The Spastics Society of India. Her charitable work for the organisation got her recognition as a social worker.[21]

Nargis was diagnosed with pancreatic cancer in 1980 and underwent treatment for the disease at Memorial Sloan-Kettering Cancer Center in New York. Upon her return to India, her condition deteriorated and she was admitted at Breach Candy Hospital in Bombay. Nargis went into coma on 2 May 1981 after she became seriously ill and died the next day. On 7 May 1981, at the premiere of her son's debut film Rocky, one seat was kept vacant for her.

Nargis was buried at Badakabarastan in Marine Lines, Mumbai.[18] A street in Bandra, Mumbai, was renamed Nargis Dutt Road in her memory.[citation needed]

One year after her death, The Nargis Dutt Memorial Cancer Foundation (Barshi Maharashtra) was established by Sunil Dutt in her memory. Though Nargis' death was widely attributed to cancer, her daughter Namrata shared that she had successfully fought the pancreatic cancer but died from a urinary tract infection. Her son Sanjay added that her lowered immunity levels made her susceptible to the infection.[22][23]

Nargis was played by actress Manisha Koirala in the film Sanju, the biopic of her son, Sanjay Dutt. The film is ranked as one of the highest grossing Indian film of 2018.[24][25] Feryna Wazheir played her character in the film Manto.[26][27]

The National Film Awards honoured Dutt by instituting the Nargis Dutt Award for Best Feature Film on National Integration upon her achievement in Hindi Cinema.[32]

Share
Retrieved from "https://en.everybodywiki.com/index.php?title=Nargis&oldid=819979"
Categories:
Hidden categories:
This page was last edited on 19 June 2020, at 16:09.
Content is available under License CC BY-SA 3.0 unless otherwise noted.
This page has been accessed 1,956 times.
Privacy policy
About EverybodyWiki Bios & Wiki
Disclaimers