Pandit Jasraj (born 28 January 1930) is an Indian classical vocalist. He belongs to the Mewati gharana of Hindustani classical music.[1]

Jasraj was born on 28 January 1930 in Pili Mandori, a village in the Hisar district of Haryana (now Fatehabad district) in a middle-class family to Motiram, a classical singer.[2][3] Motiram died in 1934 when Jasraj was four, on the day he was to be appointed as the state musician in the court of Osman Ali Khan.[4][5] Jasraj spent his youth in Hyderabad, and travelled often to Sanand to study music with musicians of the Mewati gharana.[6] In 1946, Jasraj moved to Kolkata, where he began singing classical music for radio.[6]

He is married Madhura Shantaram, the daughter of film director V. Shantaram, whom he had first met in 1960 in Mumbai.[7] They married in 1962, initially living in Kolkata, and moved to Mumbai in 1963.[8] [9] They have two children, a son, Shaarang Dev Pandit, and a daughter, Durga Jasraj, a television anchor and presenter. Jasraj's wife Madhura has directed documentaries and children's plays, and directed and produced ballets, Geeta-Govinda, Kaan Kahaani and Surdas, and the TV series, Faster Phene. Madhura made a film, Sangeet Martand Pandit Jasraj in 2009[10] and directed her first Marathi film, Aai Tuzha Aashirwad, in 2010, in which her husband and Lata Mangeshkar sang in Marathi.[11]

Music composers Jatin-Lalit are Jasraj's nephews, and Sulakshana Pandit and Vijayta Pandit, both of whom played leading roles as heroines in many Hindi films in 1970s and 1980s, are his nieces. 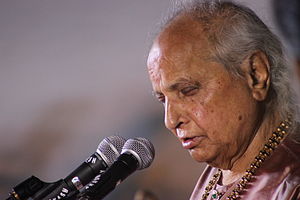 Jasraj was initiated into vocal music by his father, but initially trained as an accompanist, playing the tabla at vocal performances by his brother, the singer Maniram.[2] He credits the vocalist, Begum Akhtar, as being his inspiring him to take up classical music.[12] Jasraj began training as a vocalist at the age of 15, and performed his first stage concert as a vocalist at the age of 22.[2] Before becoming a stage performer, Jasraj worked as a performing artist on radio for several years.[8]

He initially trained as a classical vocalist with his brother, Maniram, and later with the musician and vocalist Jaywant Singh Waghela[6] and Ustad Gulam Kadar Khan of Mewat Gharana. In addition, he trained under Swami Vallabhdas of the Agra Gharana.[8] In 1960, when Jasraj went to visit Bade Ghulam Ali Khan in hospital, Khan asked him to become his disciple, but Jasraj declined saying that he could not accept Khan's tutelage since he was already Maniram's disciple.[citation needed]

As a means of livelihood, Maniram took Jasraj as an accompanying tabla player. However, at the time, like sarangi players, tabla players were considered minor artists. At the age of 14, unhappy with his treatment as an accompanying artist, Jasraj left and vowed not to cut his hair until he learned to sing. He finally cut his hair after garnering his first AIR Radio performance, where he sang Raga Kaunsi Kanada (a combination of Malkauns and Darbari Kanada).[citation needed] 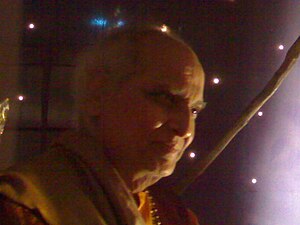 Jasraj's vocal range extends across four and a half octaves and he is known for the precision of his diction, as well as his deep timbre.[13] Although he belongs to the Mewati gharana, a school of music known for its traditional performances of khayals, Pandit Jasraj has sung khayals with some flexibility, adding elements of lighter styles, including the thumri, to khayal singing.[8] During the initial stages of his career he was criticised for incorporating elements from other schools of music, or gharanas, into his singing.[8] Music critic S. Kalidas has noted, however, that this borrowing of elements across gharanas has now become more commonly accepted.[8]

Jasraj created a novel form of jugalbandi called Jasrangi that is styled on the ancient system of moorchhana, between a male and a female vocalist, who each sing different ragas at the same time.[2][4] He is also known for presenting a wide variety of rare raags including Abir Todi and Patdeepki, as well as for his performances of more well-known ragas such as Raag Darbari.[14]

In addition to performing classical music, Pandit Jasraj has worked to popularise semi-classical musical styles, such as Haveli Sangeet, which involves performances inside temples.[13] Additionally, he has also sung classical and semi-classical compositions for film soundtracks, such as the song, 'Vandana Karo,' composed in Raag Ahir Bhairav by the composer Vasant Desai, for the film Ladki Sahyadri Ki (1966).[13] Other notable film performances include a collaboration with the Indian classical vocalist Bhimsen Joshi for the soundtrack of the film Birbal My Brother (1975), and a ballad, Vaada Tumse Hai Vaada for a horror film directed by Vikram Bhatt, titled1920 (2008).

In memory of his father, Jasraj organises a musical festival every year called the Pandit Motiram Pandit Maniram Sangeet Samaroh in Hyderabad, India.[4][5] The festival has been held annually since 1972.[15] Jasraj participated at the Sawai Gandharva Music Festival.

On 28 January 2017, the production house Navrasa Duende celebrated Pandit's 87th birthday and 80 years of his service to music as a classical music concert with the title 'My Journey', an Intimate Evening with Pandit Jasraj at Jawaharlal Nehru Stadium, New Delhi. He received a standing ovation. [16]

He also runs a school for Indian classical music in Atlanta.[18]

Pandit Jasraj has rejected claims of the inaccessibility of classical music, expressing the view that "Music belongs to everyone," and emphasizing that classical musicians like himself take efforts to reach out to their audiences.[8] He has advocated the lecture-demonstration model of performance to educate listeners about classical music.[17] He has called for greater governmental support in funding classical music performances.[19] 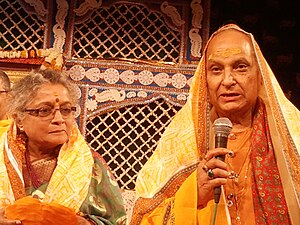 Pandit Jasraj with his wife Madhura

Share
Retrieved from "https://en.everybodywiki.com/index.php?title=Jasraj&oldid=2518323"
Categories:
Hidden categories:
This page was last edited on 6 August 2017, at 17:25.
Content is available under License CC BY-SA 3.0 unless otherwise noted.
This page has been accessed 35 times.
Privacy policy
About EverybodyWiki Bios & Wiki
Disclaimers