Helen Anne Richardson Khan (born Helen Anne Richardson on 21 November 1938), known mononymously as Helen, is an Indian film actress and dancer who is best known for her work in Hindi films. She has received two Filmfare awards and has appeared in over 700 films,[1] and is often cited as one of the most popular nautch dancers of her time.[2] In 2009, Helen was awarded with the Padma Shri by the Government of India.[3] She was the inspiration for four films and a book,[4] and is the second wife of veteran writer-producer Salim Khan.[5]

Helen Ann Richardson was born on 21 November 1938 in Rangoon, Burma to an Anglo-Indian father and Burmese mother.[6] Her father's name was George Desmier and her mother's name was Marlene. She has a brother named Roger and a sister named Jennifer. Their father died during World War II. The family then trekked to Bombay in 1943 in order to escape from the Japanese occupation of Burma. Helen told Filmfare during an interview in 1964:

...we trekked alternately through wilderness and hundreds of villages, surviving on the generosity of people, for we were penniless, with no food and few clothes. Occasionally, we met British soldiers who provided us with transport, found us refuge and treated our blistered feet and bruised bodies and fed us. By the time we reached Dibrugarh in Assam, our group had been reduced to half. Some had fallen ill and been left behind, some had died of starvation and disease. My mother miscarried along the way. The survivors were admitted to the Dibrugarh hospital for treatment. Mother and I had been virtually reduced to skeletons and my brother's condition was critical. We spent two months in hospital. When we recovered, we moved to Calcutta, and sadly my brother died there due to smallpox".[7]

She quit her schooling to support her family because her mother's salary as a nurse was not enough to feed a family of four.[8] In a documentary called Queen of the Nautch girls, Helen said she was 19 years old in 1957 when she got her first big break in Howrah Bridge.. 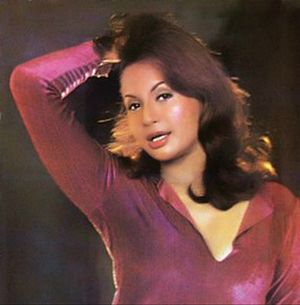 Helen in 1969, posing for Filmfare Magazine

Helen was introduced to Bollywood when a family friend, an actress known as Cukoo, helped her find jobs as a chorus dancer in the films Shabistan and Awara (1951). She was soon working regularly and was featured as a solo dancer in films such as Alif Laila (1954) and Hoor-e-Arab (1955).She also featured as Street singer in film Mayurpankh (1954).

She got her break in 1958, aged 19, when she performed the song "Mera Naam Chin Chin Chu" in Shakti Samanta's film, Howrah Bridge, which was sung by Geeta Dutt. After that, offers started pouring in throughout the 1960s and 1970s. During her initial career, Geeta Dutt sang many songs for her. 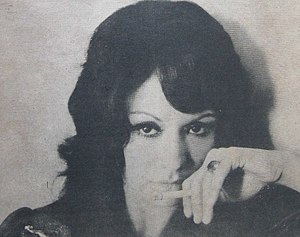 The Bollywood playback singer Asha Bhosle also frequently sang for Helen, particularly during the 1960s and the early 1970s. She was nominated for the Filmfare Best Supporting Actress Award in 1965 for her role in Gumnaam. She played dramatic roles in films like China Town and Sachaai starring Shammi kapoor which went on to be very successful at the box office. She also played a sensitive character in film Chhote Sarkar(1974) starring Shammi kapoor and Sadhana. With Shammi kapoor she did many hit dance numbers like 'Suku suku' in Junglee , ' Yama yama' in China town , 'O haseena zulfonwali' in Teesri Manzil, 'Hai pyar ka hi naam' in Singapore and 'Muqabala hamse na karo' in Prince.

Writer Salim Khan helped her get roles in some of the films he was co-scripting with Javed Akhtar: Immaan Dharam, Don, Dostana, and Sholay. This was followed by a role in Mahesh Bhatt's film Lahu Ke Do Rang (1979), for which she won a Filmfare Best Supporting Actress Award. In 1999 Helen was given India's Filmfare lifetime achievement award.

Helen officially retired from movies in 1983, but she has since then appeared in a few guest roles such as Khamoshi: The Musical (1996) and Mohabbatein (2000). She also made a special appearance as the mother of real-life step-son Salman Khan's character in Hum Dil De Chuke Sanam.. She also appeared in Humko Deewana Kar Gaye in 2006.

Helen was selected for the Padma Shri awards of 2009 along with Aishwarya Rai and Akshay Kumar.

Other ventures and legacy[edit]

She performed onstage in London, Paris, and Hong Kong. In 1973, Helen, Queen of the Nautch Girls, a 30-minute documentary film from Merchant Ivory Films, was released. Anthony Korner directed and narrated the film. A book about Helen was published by Jerry Pinto in 2006, titled The Life and Times of an H-Bomb,[9] which went on to win the National Film Award for Best Book on Cinema in 2007.

Helen appeared as a judge in the semifinals and finals of India's 2009 Dancing Queen television series. 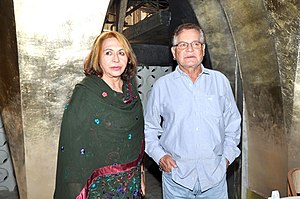 Helen standing with Salim Khan in 2012

In 1981, Helen married Salim Khan, a prominent Bollywood screenplay writer. Khan was already married and the father of four children; Helen joined the Khan family and had a large role (along with Khan and his first wife Salma) in keeping the family united. All of Helen's step-children have bonded closely with her, and Helen is almost invariably accompanied in public appearances by Salma Khan, Salim's first wife. Helen is a Christian.[10]

Share
Retrieved from "https://en.everybodywiki.com/index.php?title=Helen_(actress)&oldid=820056"
Categories:
Hidden categories:
This page was last edited on 19 June 2020, at 16:30.
Content is available under License CC BY-SA 3.0 unless otherwise noted.
This page has been accessed 1,103 times.
Privacy policy
About EverybodyWiki Bios & Wiki
Disclaimers