Skycoin is a blockchain platform. It includes Skywire, a cryptocurrency-based peer-to-peer decentralized Internet service.[3][unreliable source] Skycoin has been in development since 2013, and the Skywire testnet was released in May 2018.

Compared to earlier cryptocurrencies, the Skycoin ecosystem incorporates architectural differences that the creators claim improve its speed, scalability, security, flexibility and decentralization. These differences include dedicated hardware nodes, a new consensus algorithm, and the inclusion of an inflationary parallel currency that functions alongside the primary deflationary currency.[4][unreliable source]

Skycoin is a private company that provides blockchain application platforms, cryptocurrency trading and other related services.[8][non-primary source needed] Skycoin was founded in 2011,[3][unreliable source] by former Bitcoin developer Brandon 'Synth' Smietana,[1] and the first commits to the Skycoin platform were released in 2013.[9][unreliable source?]

In February and March 2018, Tristan Greene and Bryan Clark from technology website 'The Next Web' published a series of articles denouncing Skycoin as a scam.[5][unreliable source][10][unreliable source] In particular, the authors raised concerns that pre-mined cryptocurrencies are a scam, therefore Skycoin is a scam because all coins were created in the genesis block; the Skycoin whitepaper is a scam because it is unduly technical; the Skyminers are a scam because Skycoin is pre-mined and the Skyminers are expensive; and Skycoin's organizational structure lacks transparency, which they believe is also indicative of a scam.

Investors should always be cautious when investing in cryptocurrencies due to the prevalence of exit scams and other fraudulent behavior in this new and unregulated marketplace. Research shows that ICO exit scams have now cost investors nearly $100 million.[6] To spot an exit scam, investors should carefully vet the personnel involved, be wary of unrealistic promises, ensure the project team is handling funds appropriately, and check GitHub to confirm that the project is being actively developed. [11][irrelevant citation]

In June 2018, Skycoin terminated its relationship with its Chinese marketing team, EVOLAB, due to alleged robbery and embezzlement of funds. According to reports, at 9:30 p.m. on June 13, nine individuals led by Skycoin's China-based marketing team forcibly entered the home of Skycoin's founder Synth and his wife, holding the couple hostage. The event was triggered after it had been discovered that EVOLAB had embezzled approximately 100,000 Skycoins over the preceding six months. During the robbery, the group extracted another 18.88 Bitcoin and 6,466 Skycoins under threat of violence.[12][not in citation given][13][unreliable source?]

In May 2018, Professor Stefan Brunnhuber presented a talk to the United Nations in Geneva, in which he singled out Skycoin's Skyledger (Sky Fiber) and Obelisk platforms as a potential solution to global financial inequality and a way of easing world hunger.[7][irrelevant citation][unreliable source?]

In October 2018, cryptocurrency exchange Binance announced an ecosystem integration with the Skycoin platform. Under the arrangement, Binance's native cryptocurrency, BNB, is to be integrated into KittyCash and all future Skycoin games and applications. BNB is to become a circulating currency on the Skywire network, with the Skycoin hardware and software wallets also supporting BNB.[14][non-primary source needed]

In November 2018, cryptocurrency advocate John McAfee announced a partnership with the Skycoin platform. [15]

Skycoin transactions complete within seconds and require one Coin Hour to make a transaction. There is an anonymity feature with the use of the CoinJoin protocol which enables the platform to mix transactions from multiple wallets so they are indistinguishable from one another.[4][unreliable source] The platform is private so that IP addresses cannot be traced.

Coin Hours are a parallel currency generated by holding Skycoins in a wallet. One Coin Hour is generated each hour for every Skycoin held. Coin Hours are also earned by running a Skyminer node. Users who run Skyminers are paid in Coin Hours for providing bandwidth, storage and computing power to other users of the network.[17][non-primary source needed] 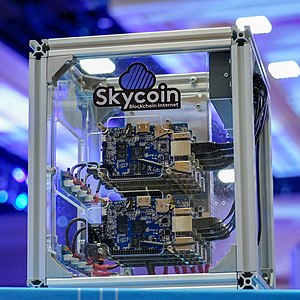 The Skyminer is a hardware node that forms part of Skycoin's cryptocurrency-based decentralized peer-to-peer Internet service known as Skywire.

Skyminers are the hardware nodes that form Skycoin's decentralized Internet service. They don't mine coins in the traditional sense. Instead the Skyminer nodes are rewarded with payment in Coin Hours for providing services to other users, rather than for solving complex math puzzles as is the case with Bitcoin and other Proof of Work cryptocurrencies. Services provided by Skyminer nodes includes providing bandwidth, storage and computing power to users of the network. [18][unreliable source?] Skyminers may be purchased directly from Skycoin, or they may be built using commonly available components by following one of several online DIY guides.[19][non-primary source needed] Skycoin chose this approach to avoid the centralization of mining pools that has occurred with Bitcoin, Ethereum and other cryptocurrencies.[20][irrelevant citation][21][unreliable source?] There were 8560 Skyminer nodes deployed globally as of October 2018.[22]

Skywire is a blockchain-based network consisting of Skyminer nodes that can connect to each other in a peer-to-peer manner via wireless, radio, satellite, optical fiber or ISP links. These nodes are used for the forwarding and routing of traffic, creating a decentralized Internet.[23][unreliable source?] This Skywire mesh network uses Multi-Protocol Label Switching rather than TCP/IP for transport. MPLS routes are predetermined and each node can only see the previous node and the next hop for the data packet. This is more secure and private than the IPV4 and IPV6 protocols, in which anyone can view the origin and the destination of the data.[citation needed]

Skycoin Fiber was originally known as Skyledger.[24][non-primary source needed] Skycoin Fiber is a blockchain platform that enables other projects to launch their own decentralized applications, similar to the way in which Ethereum enables other projects to launch ERC20 tokens and Initial Coin Offerings. The key difference is that Skycoin’s Fiber architecture gives each project its own dedicated blockchain, wallet and coin, rather than sharing a single blockchain.[25][non-primary source needed] This architecture ensures that congestion on one blockchain does not impact applications on other blockchains, as occurred in 2017 on the Ethereum platform when the CryptoKitties application caused all other Ethereum applications to slow down.[26][irrelevant citation]

Skywire is one of the projects running on Skycoin Fiber.[27][unreliable source?] Other Fiber projects include Solar Bankers [28][non-primary source needed] and KittyCash.

Skycoin’s consensus algorithm is called Obelisk. The Obelisk protocol distributes network influence through a 'web of trust' architecture and does not require any form of coin mining. Each Skyminer node has a list of other nodes that it subscribes to. The density of a node’s network of subscribers determines its influence on the network. This approach removes any incentive for centralization of consensus nodes and eliminates the risk of a 51% attack or majority attack. [29] [30]

This article "Skycoin" is from Wikipedia. The list of its authors can be seen in its historical and/or the page Edithistory:Skycoin. Articles copied from Draft Namespace on Wikipedia could be seen on the Draft Namespace of Wikipedia and not main one.

Retrieved from "https://en.everybodywiki.com/index.php?title=Skycoin&oldid=961690"
Category:
Hidden categories:
This page was last edited on 17 August 2020, at 09:18.
This page has been accessed 723 times.
Content is available under License CC BY-SA 3.0 unless otherwise noted.
Privacy policy
About EverybodyWiki Bios & Wiki
Disclaimers