An example paper printable bitcoin wallet consisting of one bitcoin address for receiving and the corresponding private key for spending.

When choosing a wallet, the owner must keep in mind who is supposed to have access to (a copy of) the private keys and thus potentially has access to the cryptocurrency. Just like with a bank, the user needs to trust the provider to keep the cryptocurrency safe. Trust was misplaced in the case of the Mt. Gox exchange, which 'lost' most of their clients' bitcoins. Downloading a cryptocurrency wallet from a wallet provider to a computer or phone does not automatically mean that the owner is the only one who has a copy of the private keys. For example with Coinbase, it is possible to install a wallet on a phone and to also have access to the same wallet through their website. A wallet can also have known or unknown vulnerabilities.[5] A supply chain attack is one way of a vulnerability introduction. In extreme cases even a computer which is not connected to any network can be hacked.[6] For receiving cryptocurrency, access to the receiving wallet is not needed. The sending party only needs to know the destination address. Anyone can send cryptocurrency to an address. Only the one who has the private key of the corresponding address can use it.[7]

A backup of a wallet can come in different forms like:

In order to initiate or verify a transaction, the cryptocurrency wallet connects to a client (node) on the network to process the request. There are several types of clients like: full clients, headers-only clients, thin clients and mining clients. Some of them can process transactions and some of them also have their own wallet functionality.[10] Full clients verify transactions directly on their local copy of the blockchain.[10] Lightweight clients consult full clients.[11] 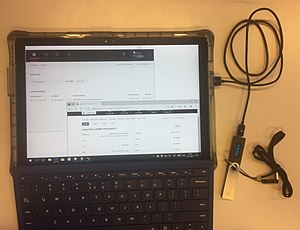 An actual bitcoin transaction from a web based cryptocurrency exchange to a hardware wallet.

With a watch only wallet someone can keep track of all transactions. Only the address (public key) is needed. Thus the private key can be kept safe in another location.[10]

With a multisignature (multisig) wallet multiple users have to sign (with their private key) for a transaction out of that wallet (public key address).[16][17][18]

With a brain wallet someone remembers the information to regenerate the private and public key pair(s), like a mnemonic sentence.[19][20]

Deep cold storage is the process of storing cryptocurrencies in cold wallets that were never connected to the Internet or any kind of network. Additionally the private keys associated with this system are generated offline. The process gained main stream attention, when Regal RA DMCC,[22] (the first cryptocurrency licensed company in the middle east) took it a couple of steps further by storing the cold wallets in the Almas Tower vault below sea level along with the company's gold bullion and insured the cryptocurrencies for full value.

With a deterministic wallet a single key can be used to generate an entire tree of key pairs.[23] This single key serves as the root of the tree. The generated mnemonic sentence or word seed is simply a more human-readable way of expressing the key used as the root, as it can be algorithmically converted into the root private key. Those words, in that order, will always generate the exact same root key. A word phrase could consist of 24 words like: begin friend black earth beauty praise pride refuse horror believe relief gospel end destroy champion build better awesome. That single root key is not replacing all other private keys, but rather is being used to generate them. All the addresses still have different private keys, but they can all be restored by that single root key. The private keys to every address it has ever given out can be recalculated given the root key. That root key, in turn, can be recalculated by feeding in the word seed. The mnemonic sentence is the backup of the wallet. If a wallet supports the same (mnemonic sentence) technique, then the backup can also be restored on a third party software or hardware wallet.

A mnemonic sentence is considered secure. It creates a 512-bit seed from any given mnemonic. The set of possible wallets is 2512. Every passphrase leads to a valid wallet. If the wallet was not previously used it will be empty.[3]:104

In a non-deterministic wallet, each key is randomly generated on its own accord, and they are not seeded from a common key. Therefore, any backups of the wallet must store each and every single private key used as an address, as well as a buffer of 100 or so future keys that may have already been given out as addresses but not received payments yet.[3]:94

Retrieved from "https://en.everybodywiki.com/index.php?title=Cryptocurrency_wallet&oldid=631026"
Categories:
Hidden categories:
This page was last edited on 23 February 2020, at 23:20.
Content is available under License CC BY-SA 3.0 unless otherwise noted.
This page has been accessed 1,239 times.
Privacy policy
About EverybodyWiki Bios & Wiki
Disclaimers