CryptoNote is an application layer protocol that aims to solve the problems outlined in Bitcoin Core, the protocol behind Bitcoin[1]. The protocol powers several decentralized privacy-oriented cryptocurrencies.

Nothing is known about the original author of CryptoNote, "Nicolas van Saberhagen."[2]

The changes in the results of blockchain analysis after implementing the ring signatures.

Transactions in the CryptoNote protocol use a one-time destination address, meaning no observer can determine if any transactions were sent to a specific address or link two addresses together.[1]

To prevent sender identification from the recipient, CryptoNote groups the sender's public key with several other keys (more precisely, it groups the sender's output with several other's outputs), making it impossible to tell who actually sent the transaction. If ring signatures are used, all possible senders referenced in the transaction are equiprobable and there is no way to determine the exact private key used while signing.[1]

Since the original release, many additional CryptoNote additions have been made, such as a change to ring signatures known as RingCT which conceals transaction amounts.

CryptoNote retargets the difficulty of every block for faster adjustment for when the network hashrate shrinks or grows intensely for a short period of time. Block sizes are dynamic, with a miner penalty fee if the miner produces a block significantly larger than the previous median of 100 blocks.[1] 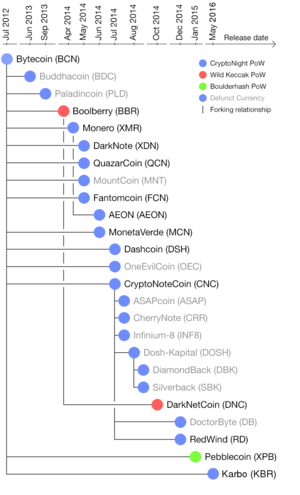 An open sourced project known as Forkmaps aims to maintain a directory of CryptoNote based coin forks. [3]

Bytecoin (BCN), not to be confused Bitcoin (BTC), was the first implementation of the CryptoNote protocol launched to the public on July 4, 2012.

The Bytecoin blockchain contains some extra information not directly related to money transfers: several blocks include geographic coordinates of universities, educational facilities among other buildings.[citation needed]

Monero is currently the best known of the CryptoNote-based cryptocurrencies. Forked from Bytecoin in April 2014, it has a 2-minute block target and 50% slower emission speed.[4]

In September 2014, Monero was attacked when someone exploited a flaw in CryptoNote that permitted the creation of two subchains that refused to recognize the validity of transactions on each other.

In 2014 there were several CryptoNote-based fraudulent coin launches, which exploited CrytoNote's open source code and the anonymity it provides in transactions.

Others articles of the Topics Cryptography AND Free and open-source software : Vertcoin, Bimil, Bitcoin Private, Dietbitcoin