Chennai is the second largest software exporter in India, next only to Bangalore. India's largest IT park is housed at Chennai. Software exports from Tamil Nadu during 2017–2018 rose 8.6% per cent to touch

1,11,179 crore, involving a workforce of 780,000,[1] and the city is the hub for deep tech startup companies.[2] Many software and software services companies have development centres in Chennai, which contributed 14 percent of India's total software exports of ₹ 14,42,140 lakh during 2006–07, making it the second largest Indian city software exporter following Bangalore and the city is the home for 7 top rated IT companies out of 15 in India.[3] The Tidel Park in Chennai was billed as Asia's largest IT park when it was built.[4][5] Major software companies have their offices set up here, with some of them making Chennai their largest base.Chennai is the largest hub for e-publishing, as there are 67 e-publishing units registered with the STPI and many Rs.8300-Cr data centers, digital hubs are in the process of development.[6][7]

Since the late 1990s, software development and business process outsourcing and more recently electronics manufacturing have emerged as major drivers of the city's economic growth. Chennai has been rated as the most attractive Indian city for offshoring services according to A T Kearney's Indian City Services Attractiveness Index 2005.[8] After Bangalore Chennai leads No. 2 in software space absorption. [9] 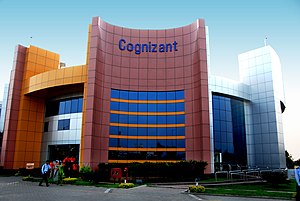 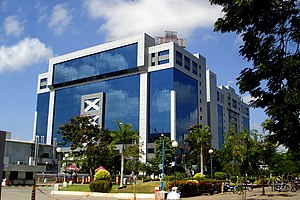 Tidel Park—one of the largest software parks in Asia—was set up on 4 July 2000 in Chennai.

The IT Corridor, on Old Mahabalipuram Road in the southeast of the city houses several technology parks, and, when completed, will provide employment to close to 300,000 people. Besides the existing Tidel Park, two more Tidel Parks are on the anvil in the IT corridor. One is under construction at the Siruseri IT Special Economic Zone ("SEZ") and the other one is being planned at the current location of MGR Film City which is just before the existing Tidel Park, in Taramani on the IT Corridor. A number of SEZ have emerged in and around Chennai. The Mahindra World City, New Chennai, a Special Economic Zone (SEZ) with one of the world's largest high technology business zones, is currently under construction in the outskirts of Chennai. It also includes the World's largest IT Park by Infosys.[11] 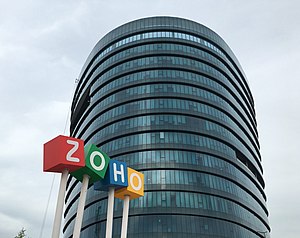 A number of Special Economic Zones (SEZ) projects has emerged along the Grand Southern Trunk Road (NH 45), making it the SEZ corridor of Chennai. It includes MEPZ SEZ established in 1984,[12] Mahindra World City, New Chennai, Shriram Properties's Gateway SEZ, Estancia SEZ and ETL Infrastructure. It is also emerging as a major IT SEZ region with a number of huge investments by Infosys. Infosys has set up its largest development center in Mahindra SEZ while India Land Tech Park is developing a massive 500-acre (2.0 km2) SEZ which is estimated to have 20,900,000 sq ft (1,940,000 m2) office space for both IT and Electronics use. Shriram The Gateway SEZ, is an integrated township with IT/ITeS SEZ residential and mall, which is also home for IT majors like Accenture, ReDIM Information Systems, later the IT park is expanded to 4.6 million sft in association with Xander Group[13] and EISL is an IT/ITES SEZ by ETL Infrastructure at Chengalpattu on 260 acres (1.1 km2) is in the process of development.[14]

Chennai houses the permanent back office of the World Bank, which is one of the largest buildings owned by the bank outside its headquarters in Washington, DC.[15] The Chennai office, administrative and IT services of the bank, including the bank's software based analytical work in bond valuation which is estimated to be US$100 billion.[16]

Retrieved from "https://en.everybodywiki.com/index.php?title=Software_industry_in_Chennai&oldid=1735567"
Categories:
Hidden categories:
This page was last edited on 21 May 2021, at 21:33.
This page has been accessed 33 times.
Content is available under License CC BY-SA 3.0 unless otherwise noted.
Privacy policy
About EverybodyWiki Bios & Wiki
Disclaimers