Speaker of the Jatiya Sangsad

The Speaker is the presiding officer of Parliament of Bangladesh. The speaker is elected generally in the first meeting of the parliament following general elections. Serving for a term of five years, the speaker chosen from sitting members of the parliament, and is by convention a member of the ruling party or alliance.

Shirin Sharmin Chaudhury of the Awami League is the current Speaker who presides over the 11th Jatiya Sangsad.

In exercise of her powers whether vested in him by the Constitution, the Rules of Procedure or any other law, the Speaker of Jatiyo Shangshad like her counterparts in any parliamentary democracy of the Westminster model, assumes a neutral role. She conducts, but does not take part in, the proceedings of the House. The Speaker cannot vote on any motion under discussion in the House. Only in case of a tie or equality of votes, she has to exercise her casting vote so as to help the House avoid a stalemate and arrive at a discussion. The powers and functions of the Speaker emanate from the Constitution and the Rules of Procedure. Some statutes have also vested him with some powers, duties and responsibilities. The constitutional powers and responsibilities of the Speaker include the following: 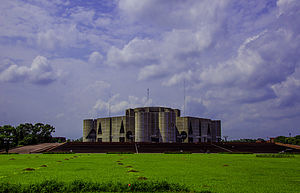 At the first sitting after a general election, Parliament presided over by the outgoing Speaker or, in his absence, by the Deputy Speaker, proceeds first to elect a Speaker and a Deputy Speaker in the manner laid down in the Rules of Procedure. A person however cannot preside over his own election. After the election of the Speaker and the Deputy Speaker, the House is adjourned for a short period so as to enable the newly elected Speaker and Deputy Speaker to take oath of their office. The House then meets with the new Speaker presiding.

The Speaker and the Deputy Speaker are deemed to have assumed their offices as soon as they take oath from the President after their election and continue in their offices until their respective successors take over generally at the commencement of a new Parliament. In the constitutional arrangement of Bangladesh, as soon as a care-taker government comes into power following the dissolution of Parliament and the Prime Minister and the members of the Cabinet, the Leader and the Deputy Leader of the Opposition and the Chief Whip and Whips of Parliament are deemed to have relieved themselves of their responsibilities. Only the Speaker and the Deputy Speaker continue in office as a link between one Parliament and the next.

Main article: List of Speakers of the Jatiya Sangsad

Retrieved from "https://en.everybodywiki.com/index.php?title=Speaker_of_the_Jatiya_Sangsad&oldid=855596"
Category:
Hidden categories:
This page was last edited on 16 July 2020, at 15:17.
This page has been accessed 68 times.
Content is available under License CC BY-SA 3.0 unless otherwise noted.
Privacy policy
About EverybodyWiki Bios & Wiki
Disclaimers
Mobile view