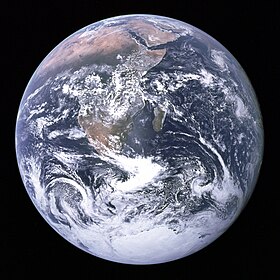 Earth is an M-class planet.

The planet classification used in the Star Trek science fiction media franchise uses letters to refer to classes of planets and planetoids. Class M planets are presented as Earth-like planets, and are therefore among the most frequented in the series.

Class A, B, and C
Typically small, young planets whose class depends on their age and the solidity of their cores. Examples include Gothos (Class A), Mercury (Class B), and Pluto (Class C).[1]
Class D
Class D objects are planetoids such as asteroids and some moons. Regula, the site of the underground second stage of the Genesis experiment in Star Trek II: The Wrath of Khan, is a Class D planetoid, as is the Klingon gulag moon Rura Penthe in Star Trek VI: The Undiscovered Country. The USS Voyager also encountered Class D planets in the Delta Quadrant, one in the Star Trek: Voyager episode "Gravity" and one in the episode "Emanations".[1]:12[2]
Class E, F, and G
Typically, proto-Earth-sized planets whose class depends on their age and the solidity of their cores.[1]
Class H
Class H planets appear in the series as harsh desert worlds. The planet Tau Cygna V visited by the USS Enterprise-D in the Star Trek: The Next Generation episode "The Ensigns of Command" was designated as a Class H world.[1]:13[2]
Class I
A class of gas giant known as "gas supergiants".[1]
Class J
Class J planets are gas giants. Class J planets are smaller than Class I, Class S and Class T planets.[1] In the Star Trek: Deep Space Nine episode "Starship Down", the USS Defiant enters the atmosphere of a Class J gas giant to rescue the crew of a Karemman ship attacked by the Jem'Hadar. Jupiter, Saturn and Uranus also fall into this class.[1]:26,28[2]
Class K
Class K planets are barren worlds with no native life. They do not possess breathable atmospheres, but have reasonably tolerable gravity, thus planets such as Mars can be colonized with atmospheric domes. However, through terraforming, they can be made into Class M worlds. In the original Star Trek series episode "I, Mudd", the planet Mudd was designated in dialogue as Class K.[1]:26[2]
Class L
Class L planets are barely habitable worlds with primitive ecosystems. In "The Chase", the planet Indri VIII is indicated in dialogue as Class L. In "The 37s", the planet on which Amelia Earhart and others are stranded is a Class L planet with an oxygen–argon atmosphere. In "Muse", the planet on which B'Elanna Torres' shuttle crash lands is described as a Class L planet, which also supports Bronze Age humanoid life. In "Timeless", the USS Voyager crashes into a Class L planet with an arctic climate. In "The Ascent", Quark and Odo crash-land on a desolate Class L planet.[1]:26[2]

Class M
Earth-like planet, the Class M designation is similar to the real-world astronomical theory of life-supporting planets within the habitable zone. The term is explained in-universe as deriving from the Vulcan term "Minshara".[3] Class M planets are said to possess an atmosphere composed of nitrogen and oxygen as well as an abundance of liquid water necessary for carbon-based life to exist. Extensive plant and animal life often flourishes; often, a sentient race is also present. Under this fictional classification, Earth is a Class M world; other Class M planets that appear throughout the franchise include Vulcan, Cardassia Prime, Bajor, Betazed, Romulus, Ferenginar, Qo'noS, and Nibiru.[1]:27[2][4]
Class N
Class N planets like Venus have a reducing environment and are barren and rocky with extremely high surface temperatures caused by thick atmospheres containing carbon dioxide and corrosive sulfides. In "Night Terrors", Class N environments were mentioned as the ideal places to use oxidizer-free explosives. The Tholians are said to have come from an N Class planet in the Star Trek: The Lost Era book The Sundered.[1]:27 The game Star Trek: The Next Generation - A Final Unity mentions that Class N planets are more related to Class M with the key difference being a higher ratio of water to land.[clarification needed]
Class O and P
Planets covered almost completely with water (class O), or water–ice (Class P).[1]
Class Q
Planets with continually changing environments caused by peculiar orbits, an orbit around a variable output star, or some other factor which causes conditions to drastically change over time.[1]
Class R
A rogue planetary body, which is one that does not orbit a star but drifts freely in space.[1] However, not all rogue planets are classified as Class R; for instance, in Star Trek: Deep Space 9 episode "The Search", the Founders homeworld in the Omarion Nebula is referred to as a "rogue" Class M planet. But this is probably a rare situation as most planets that don't belong to a solar system would be incapable of supporting life.
Class S
Class of gas giant smaller than Class T and the next larger size up from Class J.[1]
Class T
The largest class of gas giant. Both Class S and Class T are known as Ultragiants. Smaller gas giants are, in order of decreasing size, Class S, I and J. The USS Voyager encounters a Class T Super-Giant in the Delta Quadrant with "radiogenic" rings in the Voyager episode "Good Shepherd" (Note: these classes of planets could also be defined as brown dwarfs or sub-brown dwarfs.)
Class Y
Class Y planets are referred to as "demon" worlds, where surface conditions do not fall into any other recognized category. Such worlds are usually hostile and lethal to humanoid life. If life forms develop on these worlds they usually take on many bizarre forms, like living crystal or rock, liquid or gaseous physical states, or incorporeal, dimensional, or energy-based states. In the series, examples of Class Y planets include the Tholian homeworld, the "Silver Blood" planet discovered by the USS Voyager in the Delta Quadrant in the episode "Demon", and the home world of the incorporeal Medusans.[1]:28[5]
Class X and Z
Reserved for other designations of "demon" planets.[1]

Retrieved from "https://en.everybodywiki.com/index.php?title=Star_Trek_planet_classification&oldid=963734"
Category:
Hidden categories:
This page was last edited on 17 August 2020, at 18:05.
This page has been accessed 108 times.
Content is available under License CC BY-SA 3.0 unless otherwise noted.
Privacy policy
About EverybodyWiki Bios & Wiki
Disclaimers
Mobile view