Wikipedia is a website that purports itself to be an encyclopaedia for dissemination of information. It proclaims itself to be “the sum of all knowledge”.

However, depending on topic, the information on Wikipedia can be inaccurate, misleading, fabricated and forged, especially on controversial topics. According to New York Post article written by Steve Cuozzo entitled ‘Don’t trust anything on Wikipedia’ the site is misleading. He writes “It’s no secret Wikipedia’s often bonkers. Teachers warn students, and editors warn reporters. Even so, the myth endures that it’s a viable research tool that “usually” gets it right, even if a touch of skepticism occasionally comes in handy.” As per the Canadian website Global Research Wikipedia is clearly a biased propaganda. The site quotes “Wikipedia articles are more propaganda than they are historical accounts. And, often, their cited sources are misleading, or even false”.[1][2][3]

In other words...it skinks

Wikipedia has several questionable and counter-productive policies in place that appear to contradict with their alleged mission[4] and/or designed to mislead users. 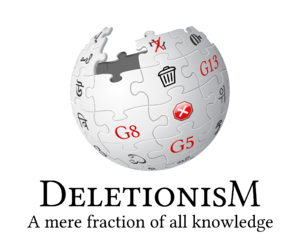 If any of those criteria are met, any Wikipedia administrator (also known as “sysop”) is allowed to erase the article right away, as opposed to the one-week grace period of an article ordinarily nominated for deletion, usually because of being out-of-scope for Wikipedia. This 7-day grace period can be used by editors of alternative wikis of whose scope the article is within, to import (rescue) the article to the knowledge pool of the more fitting alternative wiki.

Although some of the criteria for speedy deletion are reasonable (e.g. for spam prevention and personal safety), others can do more damage than good and lead to the unreasonable loss of knowledge, works and contributions into oblivion.[6]

Although administrators have the option to decide against a deletion despite of given criteria, that only ever happens rarely.

The speedy deletion policy “WP:G13” states that any article in the Draft: name space that has not been edited during the last six months is eligible for deletion, regardless of its contents.[7]

This rule has been criticized for potentially leading to the loss of legitimate knowledge.[8]

WP:G5 - Delete articles by users evading a block, no matter the content[edit]

On Wikipedia, whose fingers pressed the buttons on a keyboard apparently matters more than actual content useful to the target audience, i.e. readers and visitors.

Speedy deletion criterion G5 technically is an argumentum ad hominem, stating that any content, including legitimate articles, correct redirects and useful templates, that is suspected to have been created by someone who is deemed previously been suspended[note 1], is eligible for deletion.[9]

Even though one of the proclaimed purposes of this rule is “maximizing the quality of the encyclopedia”[10], this deletion criterion contradictively affects pages of any high encyclopædic quality.[11]

This bindingly also applies to content deemed to be added on behalf of any individual blocked on Wikipedia, known as proxy-editing or meat-puppetry, which anyone can potentially be accused of.

As such, it strongly suggests that, while made to appear like a side effect, its hidden actual purpose is suppression of valid criticism, which re-inforces the site's self-selection.

Accordingly, an honest block notice would look like this:

Not only is this criterion at odds with Wikipedia's proclaimed goals, irrespective to its slogans, and withholding constructive content from readers unthankful, but editors with destructive intentions may weaponize deletionism by invoking reverse psychology, by deliberately exposing themselves as sanction evader after instating legitimate content, discouraging other, especially longer-term editors who have a greater reputation at risk if suspected to be evading a block, from re-instating it.

Because sanctions on Wikipedia apply to identities rather than accounts, an impersonation attacker might be able to cause the identity of a target to get sanctioned. This vulnerability is like a cheat in a video game.

On the other hand, these deletionist and criticism-terminating rules might as well be a blessing in disguise for encouraging people to search for alternative websites that could have rescued those articles prior to deletion, do not suppress legitimate criticism and, and do not dispose of knowledge for absurd reasons contrary to their advertised purposes[4][note 2], such as inclusionist EverybodyWiki, which has a bot importing endangered articles.

The Wikipedia policy “Ignore All Rules” states that if a rule prevents a user from improving Wikipedia, the user can feel free to ignore it.[12]

This misleading rule logically implies includingly that a user is allowed to circumvent an account suspension instead of going through a mentally draining block appeal process before being able to improve Wikipedia again.

In reality, a user misled into circumventing a block will get blocked again, lose talk page access for mild criticism, and receive an additional punishment of having all their content erased, regardless of contentual legitimacy.

This is in contrary to Wikipedia's alleged purpose[4], the behavioural policy “Assume good faith”[13] and the supposedly widely accepted constructive mindset:

Administrative sanctions against editors are not punitive, and imposed solely to prevent harm to the encyclopedia.[14]

On Wikipedia, the discretion of a single administrator is enough to block a user, even if every other administrator reviewing the user decided not to block.

Even though a fine-printed Wikipedia policy claims that blocks are only used as a last resort for persistent problems with users[15], users have been blocked for writing reasonable criticism[16] fully in accordance with policy[17]. Such administrative behaviour discourages users from taking blocks seriously.

This section documents historical events and incidents on Wikipedia.

On June 18th 2020, the administrator Bbb23 lost his CheckUser privileges for abusive conduct and using the Check User tool in a fishing manner, shortly after which he retired from editing and administering.

Retrieved from "https://en.everybodywiki.com/index.php?title=Wikipedia&oldid=1159465"
Category:
Hidden categories:
This page was last edited on 10 December 2020, at 18:58.
This page has been accessed 4,484 times.
Content is available under License CC BY-SA 3.0 unless otherwise noted.
Privacy policy
About EverybodyWiki Bios & Wiki
Disclaimers
Mobile view