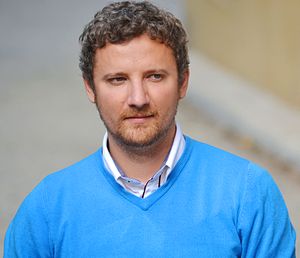 Adam Halmoši at unveiling of commemorative plaque to Josef Škvorecký in 2014.

Since 2012, he has been a spokesperson of district Prague 6 in the capital city of the Czech Republic.

After completion of Commercial Academy in Příbram, Halmoši graduated at College of media and journalism in Prague.

From 2002, he served as head of communication at The Office for Government Representation in Property Affairs.[1]

In 2006, Halmoši joined as web editor of the newly created news site tn.cz[2] and shortly after was promoted to evening main news broadcast of TV Nova's Televizní Noviny.[3][4]

Other articles of the topics Biography AND Czech Republic : Rosana Elisabeth de Montfort, List of Czech artists by date

Other articles of the topic Journalism : Arthur Nelder Dawson Jr., Lina TV, African Stand, Lansing Daily, DoolNews, Del Vaughn, Draft:SWD Media
Some use of "" in your query was not closed by a matching "".

Retrieved from "https://en.everybodywiki.com/index.php?title=Adam_Halmoši&oldid=1804998"
Categories:
Hidden categories:
This page was last edited on 25 October 2015, at 21:10.
This page has been accessed 54 times.
Content is available under License CC BY-SA 3.0 unless otherwise noted.
Privacy policy
About EverybodyWiki Bios & Wiki
Disclaimers