«Alhamdulillah» in the arabic calligraphy.

Alhamdulillah (Arabic: ٱلْحَمْدُ لِلَّٰهِ‎, al-Ḥamdu lillāh) is an Arabic phrase meaning "praise be to Allah", sometimes translated as "thank Allah".[1] This phrase is called Tahmid (Arabic: تَحْمِيد‎, lit. 'Praising')[2] or Hamdalah (Arabic: حَمْدَلَة‎).[3] A longer variant of the phrase is al-ḥamdu l-illāhi rabbi l-ʿālamīn (ٱلْحَمْدُ لِلَّٰهِ رَبِّ ٱلْعَالَمِينَ), meaning "all praise is due to God, Lord of all the worlds", second verse of Surah Fatihah.

It is frequently used by Muslims of every background, due to its centrality to the texts of the Quran and Hadith—the words of the Islamic prophet Muhammad—and its meaning and in-depth explanation have been the subject of much exegesis. It is also commonly used by non-Muslim speakers of the Arabic language. 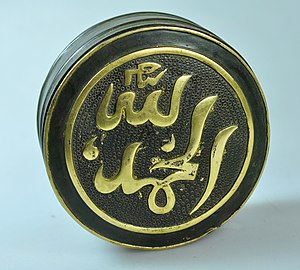 The phrase has three basic parts:

The word Allāh (Arabic: ٱللَّٰه‎) means "The God", and it is a contraction of the definite article al- and the word ʾilāh (Arabic: إِلَٰه‎, "god, deity"). As in English, the article is used here to single out the noun as being the only one of its kind, "the God" (the one and only) or "God". Therefore, Allāh is the Arabic word for "God". ʾilāh is the Arabic cognate of the ancient Semitic name for God, El.

The phrase is first found in the second verse of the first sura of the Qur'an (Al-Fatiha). So frequently do Muslims and Arabic-speaking Jews and Christians invoke this phrase that the quadriliteral verb hamdala (Arabic: حَمْدَلَ‎), "to say al-ḥamdu li-llāh" was coined, and the derived noun ḥamdalah (Arabic: حَمْدَلَة‎) is used as a name for this phrase.[1]

English translations of alhamdulillah include:

Various Islamic phrases include the Tahmid, most commonly:

Use in other historical sources[edit]

Share
Retrieved from "https://en.everybodywiki.com/index.php?title=Alhamdulillah&oldid=2053255"
Categories:
Hidden categories:
This page was last edited on 8 September 2021, at 19:30.
Content is available under License CC BY-SA 3.0 unless otherwise noted.
This page has been accessed 1,229 times.
Privacy policy
About EverybodyWiki Bios & Wiki
Disclaimers