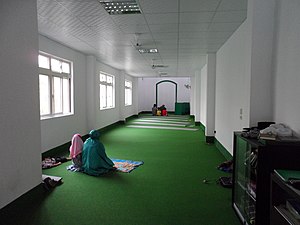 The Asr prayer consists of four obligatory rakat. An additional four rakat are recommended to be performed before the obligatory rakat.[4] As with Zuhr prayer, if it is performed in congregation, the imam is silent except when announcing the takbir,[5] i'tidal,[6] and taslim.[7]

The period of Asr prayer begins approximately when the sun is halfway down from noon to sunset (various branches of Islam differ on the starting point; some say that it begins when the shadow of an object equals its actual length plus its shadow during noon, others say that the actual length must be doubled). Zuhr prayer ends at sunset, when Maghrib prayer begins. Shia Muslims are allowed to perform Zuhr and Asr prayers one after another, so they may perform the Asr prayer before the actual period begins. Barring the Hanafi school, which forbids prayer combination, Sunni Muslims may only do this if they are traveling and incapable of performing the prayers separately. Amongst Sunnis, Salafis allow the combining of prayers for a wide range of reasons such as when various needs or difficulties arise (taking precedence from Hanbali and Shafiite schools).[8][9][10][11] Some Salafis amongst Ahl-i-Hadith consider combining prayers for no reason to be permissible.[12][13]

The Asr daily prayer is mentioned as the middle prayer in the Qur'an at sura 2 (Al-Baqara) and it is emphasized on the Muslims to protect this prayer meaning that it should be performed at all costs, ayat 238.[14] al-Asr is also the title of the 103rd chapter (sura) of the Qur’ān.The Shia sect accepts this sura as the prophecy by Allah to Martyrdom of Hazrat Imam Hussain AS who embraced martyrdom while stopping his fight and going into sajda during Asr Prayer and indicates that Humans are definatly in loss ( the likes of and murderers of Imam Hussain AS ) except those who accepted true faith and observed patience (in face of atrocities) and called all to Allah's way (The Haq) as exemplified by Imam Hussain AS.

The five daily prayers collectively are one pillar of the Five Pillars of Islam, in Sunni Islam, and one of the ten Practices of the Religion (Furū al-Dīn) according to Shia Islam.

The Asr prayer consist of four rakats, although according to some madh'habs, it may be reduced to two rakaʿāt when travelling.[citation needed]

Ja'fari and Zaydi schools of thought[edit]

According to the Ja'fari and Zaydi schools of thought the time period within which the Asr prayer must be recited is the following:

However, it is very important to recite the prayer as soon as the time begins. Letter 52 of Nahj al-Balagha contains instruction of Ali to his governors on the timings of salat, "The Asr prayers can be performed till the sun is still bright and enough time of the day is left for a person to cover a distance of six miles."

The time period within which the Asr prayer must be recited is the following:

In another hadith: Muhammad said 'He who misses his Asr Salat (i.e. performs it after its specified time) is as if he had lost his wife, children and all his wealth.’ (Sahih Muslim)

Share
Retrieved from "https://en.everybodywiki.com/index.php?title=Asr_prayer&oldid=2058855"
Categories:
Hidden categories:
This page was last edited on 9 September 2021, at 11:02.
Content is available under License CC BY-SA 3.0 unless otherwise noted.
This page has been accessed 206 times.
Privacy policy
About EverybodyWiki Bios & Wiki
Disclaimers