Since its beginnings, music in the United States has been marked by issues regarding race and power relations. Styles of music that originated from African American contributions such as negro spirituals, ragtime and jazz, have been appropriated in many various ways. However, the development of technology helped blur these musical styles so that it became possible for other ethnic groups to appropriate it.[2] As notes Herson, "cultural appropriation is a complex negotiation that involves the shifting and reworking of traditional values and an introduction of foreign value systems that become integrated into the lives of those who are using them".[3]

In the case of hip hop, this historical appropriation has lead to the dominance of non-black artists in the musical industry. The controversy lies in the fact that the presence of African Americans in popular music has often been disunited and excluded from these styles by the music industry.[2] An example is the predominance and repute of white artists in Rock and Roll, a genre that originated from African American rhythm in the Southern United States. Although not exclusive to non-African American groups in the United States, the appropriation of these gendes questions and complexifies issues regarding race and power relations in America, in an industry that has been marked by segregation.[4]

Hip Hop and Rap are musical styles that originated from the streets of the Bronx as a form of expression for African American youth and has become popular all over the world. As something that depicts and give a voice to the realities and everyday social, economic and political issues that face African American Communities, Hip Hop and Rap have gone "from the margins to mainstream".[5] With the popularization of Hip Hop, non-black artists such as Vanilla Ice and Iggy Azalea have famously introduced themselves in these genres. However, cultural appropriation becomes apparent when these artists are foreign or distant to the "spaces and places" that frame Rap and Hip Hop as "the black urban ghetto occupies a central position in urban rap narratives and is richly encoded".[6] Artists facing critique and controversy include, but is not limited to, George Gershwin, Elvis Presley, Janis Joplin, and the Beastie Boys.[6]

American activist Norman Mailer outlined the appropriation of blackness[disambiguation needed] and black culture in a phenomenon he calls "the White Negro". The White Negro is defined as the adoption of black culture by young white people.[7] In other words, it is "opting out of whiteness and acting out behind the mask of blackness".[2] In popular music and culture, this type of cultural appropriation has often been present in popular cultures as far as representations of Jim Crow in minstrel shows until hip hop music today.[2]

Authenticity is an important concept in hip hop. "Space and place" play a crucial role in this culture as it is where is where this culture articulates itself physically, in "streets, neighbourhoods or area codes, of figuratively where the realities of ghettoes and of "race-based residential allocation" is articulated.[8] For example, artists like the Beastie Boys have often been called an "inauthentic, white face rap act resembling minstrel acts of an earlier era".[9] Originating from a punk background, the group has often been questioned on their authentic connection to hip hop despite their international success.[10] 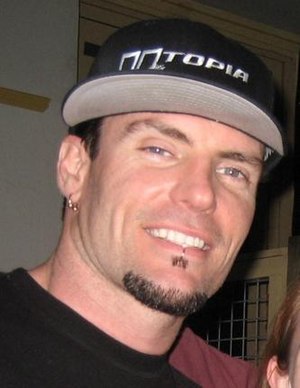 Street credibility (or street cred) is the degree of standing and believability one has. In rap music, this credibility is determined by narratives of street experiences and of blackness[11] and is important in marketing artists and albums.[12] Credibility comes into play when artists who do not originate from urban background try to exemplify an urban lifestyle.[11] For example, Vanilla Ice's credibility has often been questioned because of his suburban background from Dallas and his appropriation of urban culture when mimicking an urban lifestyle in his music with an "in your face attitude" in his lyrics, urban beats and content that displayed hyper violent masculinity.[11] However, as notes Miles White, Vanilla Ice remained "highly marketable" within young white suburban youth and on radio stations that predominately played white hip hop artists.[13]

Eminem has been called the "King of Hip Hop" by Rolling Stone magazine.[14] He capitalized on this upbringing in Detroit's' lower middle class near back communities as a way to assert his street credibility.[11] However, on multiple occasions, Eminem has addressed his whiteness and the topic of appropriation in hip hop. He has recognized that ‘‘[he] sold double the records because [he’s] White’’.[15] For example, in his song "Without Me", the rapper mentions “I am the worst thing since Elvis Presley, to do black music so selfishly / And use it to get myself wealthy (Hey) / There’s a concept that works 20 million other white rappers emerge.”.[16] In fact, white artists imitating hip hop and other African American contributions have often had more celebrity and economic success then black artists.[17] Eminem's album The Marshall Mathers LP is ranked number 2 in the to 50 best selling rap albums of all time.[18]

"Black facilitators" are African Americans in the industry who frame and help the prominence of white acts.[19] Notable examples of black facilitators include Dr. Dre who contributed to Eminem's street credibility by association and collaboration in songs and in music videos. With his renowned reputation in rap, Dr. Dre contributed to Eminem's "racial value"[20] and thus legitimizing him in the eyes of hip hop's urban communities. Black allies play a role in the authenticity and success of non-black artist and mentors in the hip hop. For example, whereas Vanilla Ice did benefit from the presence of a black ally,[20] the Beastie Boys were able to carve out an important spot in the rap industry with the help of Def Jam Recordings and their influence in the diffusion of hip hop.[21] Likewise, Iggy Azalea's mentor T.I has helped boost her career and give the Australian more urban authenticity by collaborating in songs like "No Mediocre."

Many non-black musicians in the hip hop industry have been critique for making profit of black culture and music. In 2014, Rapper Azelia Banks critiqued rapper Iggy Azalea of "co-opting" blackness to gain success and "disengaging" when issues that face African Americans are highlighted in the media, such as the Mike Brown shootings that lead to the Ferguson unrest in Missouri.[22]

Macklemore"s 2014 win at the Grammy Awards for best Rap Album of the Year over Kendrick Lamar sparked debate over the historical cycle of white artists appropriating and dominating original black music genres.[23] Since 1958, no black hip hop of R&B artist has made Billboard's Hot 100 chart, however, white artists like Justin Timberlake and Robin Thicke have both had #1 hip hop and R&B songs in 2014.[23]

Hip hop in other countries[edit]

Rap became visible in Senegal as of 1984 in clubs where popular American R&B, Funk and Rap songs be used for animation.[24] However, since the early 2000s, Hip Hop and Rap have had major influences in social movements in Senegal. These two musical genres have acquired enormous public and political significance as they are "historically situated within a number of different conditions of crisis, including massive school strikes, riots, and violence that began under the presidency of former president Abdou Diouf".[24] For example, the Y'en a Marre movement in 2011 acquired international visibility as a peaceful artistic protest lead by members of the rap industry and by journalists. Here, rap is used as a tool of social engagement to encourage youth to get involved in politics and go vote. Several artists have adopted English aliases and have been critiqued for rapping in ways that make Wolof[disambiguation needed] "sound like english".[25] For example, Senegalese rapper President J's voice has often been compared to American rapper Tupac Shakur as his sound and speech mini American rap tonalities.[25]

Because of the international success of Hip Hop, the appropriation of this genre is not exclusive to North America. The first traces of Hip Hop in Europe can be traced back to the mid 1980. The accomplishments of a small number of artists have contributed to the continent wide diffusion of this genre.[5]

Die Fantastischen Vier at "Heimspiel" in 2009

In Germany, Multikultirap represents Rap "as an expression of concern or consternation" and "address social injustice of thematized racism and xenophobia".[26] The word Deutschrap is used to represent apolitical rap music consisting of "good mood lyrics about women, parties and boozing".[26]

The group Die Fantastischen Vier contributed to the popularization of German rap[27] as their album 4 Gewinnt went platinum in 1992. The group made a conscious decision to avoid perpetuating stereotypes of American rap as they acknowledged the distance from the realities of "the poor Blacks in the U.S and middle-class Whites in Germany".[28] By introducing Hip Hop vernacular to their music, Die Fantastischen Vier was able to become famous by attracting the interests of the young German middle class.[29]

Jovanotti at a Show in Buenos Aires in 2013

Rap's presence in Italy dates from the 1980s as an alternative musical form specific to youth.[27] In the late 1980s this style of music came to the forefront by Jovanotti, who in 1988s released his album Jovanotti for President where he used Hip Hop "as an innovant variant of traditional Italian pop song, targeting the mainstream rather than the rap scene".[27]

In Brazil, Hip Hop has been visible since the 1980s in Sao Paulo. This type of Hip Hop focused on social issues as it was inspired by the "black consciousness vein" of Hip Hop.accessdate=19-30|[30] Here, the harsh realities of the poor living in Sao Paulo's suburbs we depicted in lyrics by artists such as Racionais MC's. Brazilian hip hop prevailed all over the country though the 90s and even developed into multiple variant styles such as mixes of hip hop with rap or reggae.accessdate=19-30|[30]

Influences of Hip Hop have began to appear in South Asian neighbourhoods since the beginning of the 21st century as Desi Hip Hop.[31] This variation of American Hip Hop draws from elements of Black American culture and Rap as a way for the youth to affirm their identities.[32] For young south Asians, Hip Hop is appropriated as a medium for political expression and activism in parallel to the issues of poverty and exclusion put forward by American Rap and Hip Hop.[33]

For example, the appropriation of Hip Hop is visible on products linked to the industry such as album covers and websites where artists are "wearing baggy jeans, work boots (e.g. Timberlands), sporting jerseys, gold and platinum chains, baseball caps, and do-rags".[34] This is also visible symbolically as some of the themes and principles in Hip Hop such as "antiracism" and "justice" [34] allow south Asian youth to resist the "power of hegemonic whiteness that is the legacy of colonialism".[34] Thus creating a safe realm for cultural and political expression.

Share
Retrieved from "https://en.everybodywiki.com/index.php?title=Appropriation_of_Hip_Hop_Music&oldid=1854267"
Categories:
Hidden categories:
This page was last edited on 16 May 2015, at 17:32.
Content is available under License CC BY-SA 3.0 unless otherwise noted.
This page has been accessed 357 times.
Privacy policy
About EverybodyWiki Bios & Wiki
Disclaimers