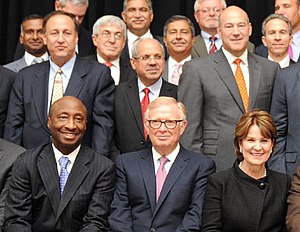 The chief executive officer (CEO),[1] or just chief executive (CE), is the most senior corporate, executive, or administrative officer in charge of managing an organization – especially an independent legal entity such as a company or nonprofit institution. CEOs lead a range of organizations, including public and private corporations, non-profit organizations and even some government organizations (notably Crown corporations). The CEO of a corporation or company typically reports to the board of directors and is charged with maximizing the value of the entity,[1] which may include maximizing the share price, market share, revenues or another element. In the non-profit and government sector, CEOs typically aim at achieving outcomes related to the organization's mission, such as reducing poverty, increasing literacy, etc.

In the early 21st century, top executives typically had technical degrees in science, engineering or law.[2]

The responsibilities of an organization's CEO are set by the organization's board of directors or other authority, depending on the organization's legal structure. They can be far-reaching or quite limited and are typically enshrined in a formal delegation of authority. Typically, responsibilities include being a decision maker on strategy and other key policy issues, leader, manager, and executor. The communicator role can involve speaking to the press and the rest of the outside world, as well as to the organization's management and employees; the decision-making role involves high-level decisions about policy and strategy. As a leader of the company, the CEO advises the board of directors, motivates employees, and drives change within the organization. As a manager, the CEO presides over the organization's day-to-day operations.[3][4][5] The term refers to the person who makes all the key decisions regarding the company, which includes all sectors and fields of the business, including operations, marketing, business development, finance, human resources, etc. The CEO of a company is not necessarily the owner of the company.

In the UK, chief executive and chief executive officer are used in both business and the charitable sector.[8] As of 2013[update], the use of the term director for senior charity staff is deprecated to avoid confusion with the legal duties and responsibilities associated with being a charity director or trustee, which are normally non-executive (unpaid) roles. In the United Kingdom, the term Director is more commonly used than Chief Executive Officer.

Lack of diversity amongst chief executives has also been a source of criticism.[15] In 2018, 5% of Fortune 500 CEOs were women.[16] The reasons for this are multi factorial, and may include natural sex differences, the existence of old boy networks and the lack of female role models.[17][18][19] Some countries have passed laws mandating boardroom gender quotas.[20]

Retrieved from "https://en.everybodywiki.com/index.php?title=CEO&oldid=552597"
Categories:
Hidden categories:
This page was last edited on 18 October 2019, at 20:54.
Content is available under License CC BY-SA 3.0 unless otherwise noted.
This page has been accessed 6,446 times.
Privacy policy
About EverybodyWiki Bios & Wiki
Disclaimers