Dynamo Foundation was founded on April 9th, 2003, in the city of Pistoia, Italy. Its main financer is Intek Group S.p.A., a stockholder listed on the Milan stock exchange. Dynamo Foundation has been created and developed by Vincenzo Manes, an Italian entrepreneur, who started to develop the project in 1997. He has been inspired by the actor and philanthropist Paul Newman. Dynamo Foundation has been the first recreational therapy center in Italy [3]. From 2003 to 2005 the Foundation began to develop different projects, with the aim of improving its relationship network in order to offer relevant services to its customers [3].

Vincenzo Manes was born in Venafro, a small municipality located in the province of Isernia, Molise, on April 1, 1960. He began his investment career by working in different companies located in the United States of America. In 1993 he returned to Italy and founded the holding company, called Intek Group, for which he still holds the role of president. Intek Group has controlling shares over other companies, including KME AG, Ergycapital SpA (renewable energies), Culti (high-end ambient fragrances). Before founding "Dynamo Foundation" in 2003, he created "Europe Investments" and worked for the banking group called "Citigroup", both in Milan and New York. Vincenzo Manes, throughout his career, has been involved in politics and non-profit companies. In addition to being a director of the WWF Italy foundation, Manes is the founder of several philanthropic activities through his "Dynamo Foundation" [4]. After having founded Dynamo Foundation, in 2007 Vincenzo Manes also founded Dynamo Camp[5].

Dynamo Foundation holds as its mission the responsibility to increase, enhance, defend and support the creation and the development of organizations that deal with, and care about, social issues such as education, health, social services, and environment, while striving to create occupations and offer new jobs, by proposing and realizing recreational therapy activities directed to its patients[3] [5].

The Foundation’s sustainability and economic support are entirely ensured by Intek S.p.A., which takes care of all operating costs incurred by the Foundation activities. The network of partnerships also represented a strategic relational capital for Dynamo Foundation over time. Dynamo Foundation’s main interest is to develop projects, and maintain their sustainability in the present and over time [6]. They aim is to refine the Foundation's structure, this is done over time by investing on their internal organization, adjusting the managerial capacity of the management team, changing the capacity to raise funds directed to the performance of the institutional activity and with the ability to give life to entrepreneurial initiatives that can support their institutional activity. The Foundation’s investors' support and are committed both economically and managerially to projects that have a positive impact on society. Investors can play an active role in financing organizations and monitoring the projects’ management, so that the resources donated can be proficiently allocated[3].

Dynamo Camp is composed of buildings and facilities, that are surrounded by an oasi in Limestre (PT), Italy, where different activities take place. The main activities carried out in the Dynamo Camp are horse-riding lessons, a marquee for circus activities, rock climbing lessons, archery lessons, agility courses with dogs, as well as theater and video production studio facilities [7]. Dynamo Camp supports projects to help ill young people by offering different recreational activities[5]. In 2015 Dynamo developed free therapy programs for 1,687 sick children in the Limstre camp, near the Pistoia Apennines, and for other 2,500 children in hospitals and family homes, distributed in numerous cities throughout the Italian Peninsula [8] [9]. Dynamo Foundation relies on a self-financing component, thanks to the activities of Dynamo Academy. The financial resources that are needed to run the camp and its activities are gathered mostly, but not exclusively, through donations [10]. In 2013, Dynamo received a total amount of donations of 2.67 million euros and in 2014 they received a total amount of donations of 4.38 million euros. The donors were 43% individuals, 39% companies, 14% foundations or associations, and 4% deriving from the public sector. In total, between individuals and companies, over 3,500 entities have contributed through donations to support the Dynamo Camp. They have a specific strucutre, composed of: 54 employees, 75 seasonal staff, 24 doctors and 18 nurses [11] [12]. 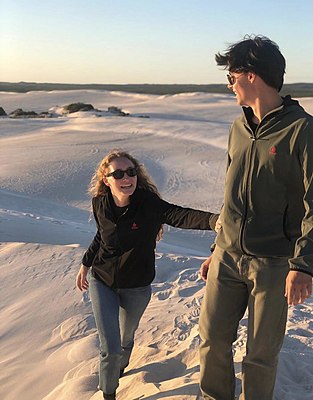 Pro Dynamo Apparel used for a hike in Australian desert

Pro Dynamo is a clothing manufacturer company, founded in 2015. It produces and commercializes goods under the brand name "Dynamo the Good Company". The merchandising produced is sold inside the Dynamo Camp, as well as in physical stores. Pro Dynamo S.r.l. is based on the Newman's Own model, creating an inside economy. It has different forms of income, so as not to depend exclusively on donations. On June 29th, 2016, Dynamo's products became available on Amazon.com, in a dedicated shop window [13]. Subsequently, in 2018 "Dynamo the Good Company" released its first collection, composed solely of the mono-product "Felpa Dynamo", a hooded sweatshirt deriving from the iconic ″Felpa Ozne″ worn by the Dynamo staff in the previous years. Dynamo's apparel is sold in 50 boutiques.

Dynamo Academy contributes to Dynamo Camp’s financing by gaining corporate sponsorship for training and formative activities. Dynamo Academy is a social enterprise specializing in creating training designs, experiential and Corporate social responsibility activities for those companies that want to integrate their training and business needs with practices that contribute to social issues. Dynamo Academy's enterprises aim at building and developing teamwork and individual motivation starting from Dynamo values, which are based on the concept of non-competitive challenges and on sharing experience as a central point in the personal and work growth of both the individual and the team. They aim of benefiting society by spreading knowledge of those values. [14]. Dynamo Academy also offers educational activities, carried out in collaboration with different Italian educational entities such as schools and universities, that take place in the form of different executive classes. Those formative activities aim at stimulating philanthropic activities and sparking interest towards non-profit enterprises in society and in individuals and teams that are directly part of the decision making processes in companies with substantial social responsibilities. An advisory service offered by the Dynamo Foundation, aims at strengthening and improving corporate social responsibility and fostering philanthropic activities in other companies' directors' boards [15].

Acqua Dynamo is a Benefit Corporation that packages and commercializes natural and sparkling water. The project, started in 2015 and inspired by Ethos Water, supports socially responsible behaviors within the society. Acqua Dynamo's contributes, with its profits, to cover financial expenses necessary for the social projects of the Dynamo Foundation [16]. Acqua Dynamo springs out the Apuan Alps, located in northern Tuscany, and has the highest level of natural alkaline acidity (8.4) pH.

The Dynamo Oasis was founded in 2006 and was originally named ‘Oasi Cesto del Lupo’. It is located on the territory of a former hunting reserve, in the Pistoia Apennines. The WWF-affiliated Oasis Dynamo covers about 900 hectares in a pre-Apennine environment, in the municipalities of San Marcello Pistoiese and Piteglio (Pistoia).

In the Oasis, in addition to scientific research and conservation actions, recreational activities are carried out, such as excursions and sports activities, for those staying as Dynamo guests. The Dynamo Oasis has also started an affiliation with the World Wide Fund for Nature (previously the World Wildlife Fund) [18].

The Dynamo Art Factory was founded in 2009, which connects art and children thanks to the collaboration of professional artists. From 2009 more than 90 contemporary artists, such as Alessandro Papetti, have collaborated with Dynamo. The impact given by the children-art experience has been scientifically tested by Fondazione Alta Mane [19]. The research has been conducted through questionnaires and tested on 328 children, 220 teenagers, 193 parents and 10 artists[20].

Share
Retrieved from "https://en.everybodywiki.com/index.php?title=Dynamo_Foundation&oldid=884858"
Categories:
Hidden category:
This page was last edited on 23 July 2020, at 00:12.
Content is available under License CC BY-SA 3.0 unless otherwise noted.
This page has been accessed 221 times.
Privacy policy
About EverybodyWiki Bios & Wiki
Disclaimers