Frank Michael Watson (born March 9, 1943) served as the secretary to the First Presidency of The Church of Jesus Christ of Latter-day Saints (LDS Church) from 1986[1] until his call as a general authority of the LDS Church in 2008.

Watson was born in Spring City, Utah. He received a bachelor's degree in business and office administration from Utah State University. He was in the United States Army for three years and was awarded the Bronze Star and Army Commendation Medals.

In April 2008, Watson was called as a member of the First Quorum of the Seventy of the LDS Church.[1] He previously served as a counselor in the church's Africa Southeast Area and in 2011 was appointed as a counselor in the Pacific Area, based in Auckland, New Zealand, where he served until August 2013. In October 2013, Watson was released from the First Quorum of the Seventy and designated as an emeritus general authority. 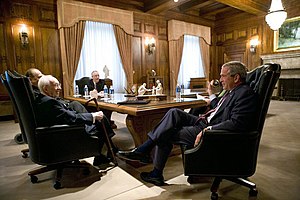 Watson is married to Jolene Mann and they are the parents of 12 children.

Retrieved from "https://en.everybodywiki.com/index.php?title=F._Michael_Watson&oldid=889469"
Categories:
Hidden categories:
This page was last edited on 24 July 2020, at 07:04.
This page has been accessed 314 times.
Content is available under License CC BY-SA 3.0 unless otherwise noted.
Privacy policy
About EverybodyWiki Bios & Wiki
Disclaimers
Mobile view