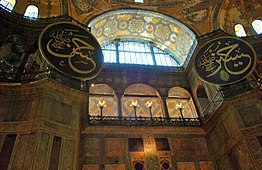 The Ottomans were officially from Hanafi-Sunni branch of Islam, the names of two sons of Fatimah and Ali were inscribed inside all of their mosques. An example of this is the writings of Hasan and Husayn, two grandchildren of Muhammad by the calligrapher Kazasker Mustafa Izzet Efendi with Islamic calligraphy in Hagia Sophia, Istanbul, Turkey.

Alī ibn Abī Ṭālib (Arabic: عَلِي ابْن أَﺑِﻲ طَالِب‎, 599 – 661 ACE) was an early[lower-alpha 1] Islamic leader. Ali is revered by Sunni Muslims as the fourth Rightly Guided Caliphs, and as a foremost religious authority on the Qur'an and Fiqh (Islamic jurisprudence). Shi'a Muslims consider him the First Imam appointed by the Islamic prophet Muhammad and the first rightful caliph. Ali was the cousin of Muhammad, and after marriage to Fatimah he also became Muhammad's son-in-law.

His father was Abu Talib and his mother was Fatimah bint Asad, but he was raised in the household of Muhammad, who himself was raised by Abu Talib, Muhammad's uncle. When Muhammad reported receiving a divine revelation, Ali was the first child to accept his message and first male to convert to Islam at the age of 12, dedicating his life to the cause of Islam.[4][5][6]

Ali had four children with Muhammad's daughter Fatimah: Al-Hasan, Al-Husayn, Zaynab[7] and Umm Kulthum. After Fatimah's death, he married Umamah the daughter of Zainab the elder daughter of Muhammad, and had two sons with her: Hilal (also known as "Muhammad al-Awsat or Muhammad the Middle"), and 'Awn.[8] His other well-known sons were Abbas ibn Ali, born to Umm al-Banin Fatimah bint Hizam, and Muhammad ibn al-Hanafiyyah,[9] from Khawlah bint Ja'far, another wife from the central Arabian tribe of Banu Hanifah, whom Ali had also married after Fatimah's death.

Hasan, born in 625, was the second Shia Imam and he also assumed the role of caliph for several months after Ali's death. In the year AH 50 he died after being poisoned by a member of his own household who, according to historians, had been motivated by Mu'awiyah.[10] Husayn, born in 626, was the third Shia Imam, whom Mu'awiyah persecuted severely. On the tenth day of Muharram, of the year 680, Husayn lined up before the army of the caliph with his small band of followers and nearly all of them were killed in the Battle of Karbala. The anniversary of his death is called the Day of Ashura and it is a day of mourning and religious observance for Shia Muslims.[11] In this battle some of Ali's other sons were killed. Al-Tabari has mentioned their names in his history: Abbas ibn Ali, the holder of Husayn's standard, Ja'far, Abdullah and Uthman, the four sons born to Umm al-Banin; Abu Bakr (also known as "Muhammad al-Asghar or Muhammad the Younger"). There is, however, some doubt as to whether the last died in the battle.[12] Some historians have added the names of Ali's other sons who were killed at Karbala, including Ibrahim, Umar and Abdullah ibn Al-Asqar.[13][14] His daughter Zaynab—who was in Karbala—was captured by Yazid's army and later played a great role in revealing what happened to Husayn and his followers.[15] Ali's descendants by Fatimah are known as sharifs, sayeds or sayyids. These are honorific titles in Arabic, sharif meaning 'noble' and sayed or sayyid meaning 'lord' or 'sir'. As Muhammad's descendants, they are respected by both Sunnis and Shi'ites.[7]

Both of his sons by Umamah bint Zaynab, that is Hilal and 'Awn, died in Iran, with the latter having been martyred in a battle against Qays ibn Murrah (the governor of Khorasan), and the former dying naturally.[8]

The Isaaq clan-family in Somaliland and Ethiopia claims descendant to Ali through its forefather Sheikh Ishaaq.[25][26][27]

The Sayyid Aljabery family of southern Iraq are descendants of Ali from his son Imam Husayn. The Bukhari of Pakistan are Syed descendends of Ali, and includes 9 of the 12 Shia imams. The Idrisid and Alaouite dynasties of Morocco claim to be descended from Ali and Fatimah. The descendants of Ali include the Hashemite royal family of Jordan,[47] the Isaaq clan-family in Somaliland and Ethiopia,[25][26][27] the Husseini family of Lebanon, the Hiraki family of Syria and Egypt, the Alaouite royal family of Morocco and the Ashrafs of the city of Harar, Mashwanis and Awans (also referred as Alvis) of Pakistan. Other prominent descendants include: Muhammad al-Nafs al-Zakiyya, Abdullah al-Aftah, Ali al-Uraidhi ibn Ja'far al-Sadiq, Muhammad Ibn Qasim (al-Alawi), Muhammad ibn Ja'far al-Sadiq, Yahya ibn Umar, Muhammad ibn Ali al-Hadi and Ibn Dihya al-Kalby.

This is a simplified family tree of Husayn ibn Ali. People in italics are considered by the majority of Shia and Sunni Muslims to be Ahl al-Bayt (People of the House). Twelver Shia also see the 4th to 12th Imams as Ahl al-Bayt (Ali is an imam in Mustaali but no number is assigned for this position, and Hasan ibn Ali is not an Imam in Nizari Imamah).

This is a simplified family tree of Abbas ibn Ali.

Retrieved from "https://en.everybodywiki.com/index.php?title=Family_tree_of_Ali&oldid=2054371"
Categories:
Hidden categories:
This page was last edited on 8 September 2021, at 23:18.
This page has been accessed 33 times.
Content is available under License CC BY-SA 3.0 unless otherwise noted.
Privacy policy
About EverybodyWiki Bios & Wiki
Disclaimers