Frances Elizabeth "Fran" Allen (born August 4, 1932) is an American computer scientist and pioneer in the field of optimizing compilers. Allen was the first female IBM Fellow and in 2006 became the first woman to win the Turing Award.[2] Her achievements include seminal work in compilers, program optimization, and parallelization.[3]

Allen grew up on a farm in Peru, New York. She graduated from The New York State College for Teachers (now part of the State University of New York at Albany, SUNY) with a B.Sc. in mathematics in 1954 and began teaching school in Peru, New York.[4] After two years, she enrolled at the University of Michigan and earned an M.Sc. degree in mathematics in 1957.[5]

Deeply in debt, she joined IBM Research in Poughkeepsie, NY, as a programmer in 1957, where she taught incoming employees the basics of Fortran. She planned to return to teaching once her student loans had been paid but ended up staying with IBM for her entire 45-year career. Allen was assigned to the Harvest project for code breaking with the National Security Agency in 1959 and worked on a programming language called Alpha.[2] She managed the compiler-optimization team for both Harvest and the Stretch project. In the 1960s she contributed to the ACS-1 project and in the 1970s to PL/I. From 1970 to 1971 she spent a sabbatical at New York University and acted as adjunct professor for a few years afterwards. Another sabbatical brought her to Stanford University in 1977.[5]

Allen became the first female IBM Fellow in 1989. She retired from IBM in 2002 but remains affiliated with the corporation as a Fellow Emerita. In 2007, the IBM Ph.D. Fellowship Award was created in her honor.[6]

Fran Allen's work has had an enormous impact on compiler research and practice. Both alone and in joint work with John Cocke, she introduced many of the abstractions, algorithms, and implementations that laid the groundwork for automatic program optimization technology. Allen's 1966 paper, "Program Optimization," laid the conceptual basis for systematic analysis and transformation of computer programs. This paper introduced the use of graph-theoretic structures to encode program content in order to automatically and efficiently derive relationships and identify opportunities for optimization. Her 1970 papers, "Control Flow Analysis" and "A Basis for Program Optimization" established "intervals" as the context for efficient and effective data flow analysis and optimization. Her 1971 paper with Cocke, "A Catalog of Optimizing Transformations," provided the first description and systematization of optimizing transformations. Her 1973 and 1974 papers on interprocedural data flow analysis extended the analysis to whole programs. Her 1976 paper with Cocke describes one of the two main analysis strategies used in optimizing compilers today. Allen developed and implemented her methods as part of compilers for the IBM STRETCH-HARVEST and the experimental Advanced Computing System. This work established the feasibility and structure of modern machine- and language-independent optimizers. She went on to establish and lead the PTRAN project on the automatic parallel execution of FORTRAN programs. Her PTRAN team developed new parallelism detection schemes and created the concept of the program dependence graph, the primary structuring method used by most parallelizing compilers. 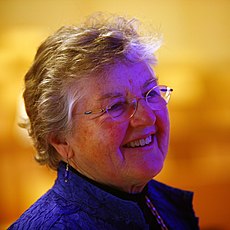 She received the IEEE Computer Society Charles Babbage Award in 1997 and the Computer Pioneer Award of the IEEE Computer Society in 2004.[12] In 1997, Allen was inducted into the WITI Hall of Fame.[13] She won the 2002 Augusta Ada Lovelace Award from the Association for Women in Computing. In 2004, Allen was the winner of the ABIE Award for Technical Leadership from the Anita Borg Institute.[14][15]

Allen was recognized for her work in high-performance computing with the 2006 Turing Award.[16][17] She became the first woman recipient in the forty-year history of the award, which is considered the equivalent of the Nobel Prize for computing and is given by the Association for Computing Machinery.[18][19][20][21][22] In interviews following the award she hoped it would give more "opportunities for women in science, computing and engineering".[23]

In 2009 she was awarded an honorary doctor of science degree from McGill University for "pioneering contributions to the theory and practice of optimizing compiler techniques that laid the foundation for modern optimizing compilers and automatic parallel execution."[24]

Share
Retrieved from "https://en.everybodywiki.com/index.php?title=Frances_E._Allen&oldid=219753"
Categories:
Hidden categories:
This page was last edited on 13 November 2018, at 14:45.
Content is available under License CC BY-SA 3.0 unless otherwise noted.
This page has been accessed 1,236 times.
Privacy policy
About EverybodyWiki Bios & Wiki
Disclaimers