Heads Up (The Walking Dead)

Search Heads Up (The Walking Dead) on Amazon.

"Heads Up" is the seventh episode of the sixth season of the post-apocalyptic horror television series The Walking Dead, which aired on AMC on November 22, 2015. The episode was written by Channing Powell and directed by David Boyd.

This episode reveals the unresolved fate of Glenn Rhee after the episode "Thank You" and builds tension for the mid-season finale "Start to Finish." It adapts the rope-climbing scene from "Volume 14, "Issue #81" of the comic book series.

After being knocked off the garbage dumpster by Nicholas' corpse, Glenn crawls under the dumpster to evade the walkers that have surrounded it. Time passes and the walkers disperse, and Glenn is found by Enid. In a nearby store, Enid explains that she had fled Alexandria when the Wolves attacked it, and before Glenn can learn more, she runs off. Glenn discovers the body of David and his note to Betsy, and decides to chase after Enid. He catches up to her in a restaurant, and despite her holding a gun to him, Glenn manages to convince Enid to accompany him back to Alexandria. En route, they find some balloons that they use to distract the walkers to keep the way clear.

In Alexandria, Rick assesses the damage from the Wolves' attack, and finds a section of wall where blood is dribbling from, and starts working to re-enforce it, aware his hammering is luring more walkers to the walls. Tobin joins Rick to help with the repairs, admitting to Rick that their group brought many changes to Alexandria but the remainder of them are adapting and thankful for their help. Elsewhere, Carl provides handgun lessons to Ron, but refuses to allow Ron to use live ammunition. Ron sneaks into the armory to obtain cartridges for the gun.

Morgan is forced to tell Rick and Michonne that he had let the Wolves that they had captured escape. Morgan justifies his actions by reminding Rick that he had previously spared Morgan's life, and that while he had wanted to kill the Wolves before, he believes people can change. Later Morgan discreetly meets with Denise, acting as Alexandria's doctor, and tells her he needs her help to treat somebody injured. Morgan leads Denise to the lone Wolf he had secured in one townhouse, but his actions are witnessed by Carol, who follows them inside and demands to see who he has captured.

Spencer attempts to climb over the Alexandria walls to lead some of the walkers away, but ends up falling. Tara helps to dispatch walkers while Rick and Tobin recover Spencer back inside Alexandria. Spencer explains his actions as trying to follow what Rick had wanted to do earlier, but had excluded any of the Alexandrians from helping.

In the distance, they spot balloons rising above the walls, and Maggie realizes it is a sign from Glenn. Just then, the old church tower, which had been shown deteriorating throughout the episode, topples onto the wall segment that Rick and Tobin were trying to reinforce, crashing through it and allowing walkers to flood into Alexandria. 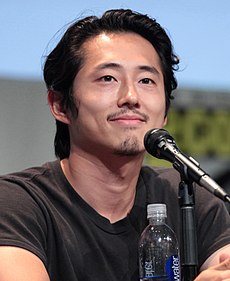 This episode marks the return of Steven Yeun (Glenn Rhee) after a temporary absence.

With this episode, Steven Yeun, who plays Glenn, is added back into the opening credits. His name had been removed for the previous three episodes after "Thank You" had left his status unknown.

The episode received mixed reviews from critics. As of 2015, it holds a 52% rating with an average score of 7.2 out of 10 on the review aggregator Rotten Tomatoes. The critics' consensus reads: "With "Heads Up," The Walking Dead offers the resolution to a major cliffhanger, but with frustrating results."[1]

Matt Fowler of IGN gave it a 7.0 out of 10 and wrote in his verdict: "The best parts of "Heads Up" were definitely the beginning - which finally cleared up the whole Glenn debate/debacle - and the very end when the building came crashing down, breaking the town's big barrier. Everything else was just there to lead us up to bigger things. Bigger developments. Better stories. This one contained a lot of recycled themes, including Rick still considering everyone outside of his group (with Deanna as the exception, and Gabriel as the reverse exception) as the equivalent of "Redshirts" on Star Trek."[2]

Zack Handlen of The A.V. Club gave it a B and wrote, "'Head's [sic] Up' opens and closes with a bang, the former metaphorical, the latter implied. In between those two dramatic explosions, there's a lot of talking."[3]

Brian Moylan of The Guardian gave it a less favorable review, saying: "Glenn is alive, and The Walking Dead will never be the same.... It would rather kill off a main character than pull a lame switcheroo. Until now."[4]

Share
Retrieved from "https://en.everybodywiki.com/index.php?title=Heads_Up_(The_Walking_Dead)&oldid=1151510"
Categories:
Hidden categories:
This page was last edited on 2 December 2020, at 03:34.
Content is available under License CC BY-SA 3.0 unless otherwise noted.
This page has been accessed 804 times.
Privacy policy
About EverybodyWiki Bios & Wiki
Disclaimers