From EverybodyWiki Bios & Wiki
Jump to:navigation, search
"Maoz" redirects here. For the Israeli director, see Samuel Maoz.
‹ The template below (Incomplete) is being considered for deletion. See templates for discussion to help reach a consensus. › 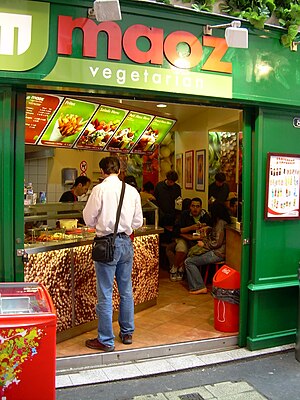 Maoz Vegetarian is a chain of falafel fast food restaurants, that purveys vegetarian fare with a vision of "spreading the vegetarian lifestyle worldwide".[1][2] The chain was founded by a husband and wife, Nahman Milo and Sima Bar-On, Israelis, who were living in Amsterdam, Netherlands.[3] The first restaurant opened in 1991 on the Reguliersbreestraat, Amsterdam, and the first store outside the Netherlands opened in 1996.[4] The company is based in Amsterdam.[5]

Expansion, by the way of franchise, was initially rapid, with at least four stores opening in 2007 alone[6] in Europe, North America, and Australia. The expansion has not been without setbacks. A location in Munich, Germany, which was opened in mid-2006,[7] was closed as of February 2008.[8] Locations in Washington, D.C.; Hoboken, New Jersey; and Berkeley, California also closed after only being open for a few years.

According to the company's website,[9] franchises operating under the brand name are located in the Netherlands (six stores) as well as twelve locations in the United States (five in New York City), France (two in Paris), Spain (one in Barcelona) and Brazil (one in São Paulo).

Maoz's fare consists of two main items, the Maoz Falafel Sandwich and the Maoz Falafel Salad Box.[5][10] Originally, restaurants offered only falafel, but the menu in some locations has since been expanded to include other vegetarian items, such as pommes frites (Belgian-style French fries).[10]

Retrieved from "https://en.everybodywiki.com/index.php?title=Maoz_Vegetarian&oldid=928635"
Categories:
Hidden categories:
This page was last edited on 7 August 2020, at 01:56.
This page has been accessed 1,927 times.
Content is available under License CC BY-SA 3.0 unless otherwise noted.
Privacy policy
About EverybodyWiki Bios & Wiki
Disclaimers