Buy this album Please Touch or listen to it on amazon

Please Touch is the second studio album that is from the American rock band Sink Tapes. 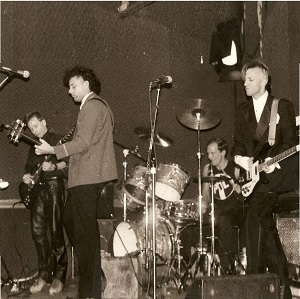 The eleven-track album was self-released by Sink Tapes on 7-inch vinyl and digital download, on 22 November 2012. Please Touch was produced by Sink Tapes and mastered by Bryan Batiste. The album is described as having a "distorted, drone-heavy side and a mellow, melodic side" and it draws comparison to the music of the art rock band the Velvet Underground, and the punk rock band Television. The music video for the track "The Soul is in the Kitchen" is a candid glimpse of the band, which showcases Sink Tapes "rocking out, smoking cigarettes, sticking drum sticks down each other's pants and generally acting ridiculous."[1] The song "Thru Your Mind" was written by the 1980s new wave band mode/IQ. Please Touch was reissued with Mint 400 Records, in 2014.

In an interview for The Pop Break on the songwriting of Please Touch, vocalist and drummer Gabe Chiarello explains "more than one of us writes[;] it isn't like one of us prefers to write clean pop songs and another prefers heavier distorted songs" and continues "with Please Touch everyone brought their own ideas and songs, sometimes more finished than others, and we all worked them out together."[1]

A review by Maria Mar in The Aquarian Weekly says "although they are on the indie side, even straight-laced pop fans will likely enjoy this specific album and, as such, it's the perfect place for the uninitiated to begin a journey into the Velvet Underground. Everything about it is beautifully done, and it’s a welcome twist to the band’s earlier, much edgier sound." She notes that her favorite songs are "The Soul Is In the Kitchen," and "Inward Bed."[2] The Fire Note reviewer Scott Lade says Please Touch "ha[s] a casual confidence to it that I really enjoyed.[3] The Daily Progress' Dave Cantor notes "there's a fuzzy '90s tact, replete with gnarled guitar [which] portrays a band comfortable with some of the freer tendencies rock's helped foster since '60s experimentalism."[4]

Speak Into My Good Eye editor Chris Rotolo describes the album as "an exhibition in[to] Sink Tapes evolution as songwriters," noting the "distorted and disheveled instrumental flow [and] stream of alluring pop missives... and Twin Peaks references." He acknowledges the "stylistic payment of homage to The Velvet Underground in "Lou Is Cooler Than You," distorted Sonic Youth-esque meddling on "Fairmount," and sultry uptempo crunch bar Jesus & Mary Chain-type arrangements" on Please Touch.[5]

Retrieved from "https://en.everybodywiki.com/index.php?title=Please_Touch&oldid=461851"
Categories:
This page was last edited on 22 May 2019, at 03:13.
This page has been accessed 195 times.
Content is available under License CC BY-SA 3.0 unless otherwise noted.
Privacy policy
About EverybodyWiki Bios & Wiki
Disclaimers