She was born in Lahore on 12 June 1935 into a Muslim family and was named Khurshid Akhtar.

Shyama arrived in Mumbai from Lahore in the 1940s. As a young girl, she acted in a few films such as Noor Jehan's husband Shauqat Rizvi's Zeenat (1945) and Meerabai (1947).[3]She worked with Shammi kapoor in romantic classic Mirza Sahiban (1957).

Director Vijay Bhatt gave her the stage name Shyama, by which she is credited in her movies. She had starring roles in Guru Dutt's classic Aar Paar, and later in Barsaat Ki Raat, which was perhaps her best performance. She was a major star in the 1950s and 1960s and acted in more than 150 movies, many in starring roles. During the period 1952-60, she appeared in as many as 80 films, mostly in leading roles. In 1963, she had as many as 18 releases and in 1964 she had 17 releases. 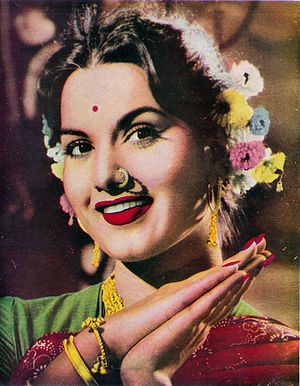 Her best known roles were in Aar Paar (1954), Barsaat Ki Raat (1960) and Tarana. She was also noticed for her versatility through her performances in Milan, Bhai-Bhai (1956), Mirza Sahiban (1957), Bhabhi (1957) and Sharada (1957). For her performance in Sharada, she was awarded the Filmfare Award for Best Supporting Actress.

She was the actress in late 50s who has been most responsive to the rhythm and lyrics of the music directors and poets. Songs picturised on her such as "Ae Dil Mujhe Bata De", "O Chand Jahan Wo Jaye", "Ae Lo Main Hari Piya", "Dekho, Wo Chand Chhup Ke Karata Hai Kya Ishare", "Chhupa Kar Meri Aankhon Ko", Sun Sun Sun Sun Zalima and "Ja Re Ka Re Badara" are examples of her sensitive acting. She did a double role in Do Bahen (1959), portraying twins who were completely different in character.

She quoted in an interview: "I never needed to be taught [about acting]... I was confident and didn't need to think too much." She believed stars are born and not made.[4]

She was married to cinematographer Fali Mistry in 1953. Her husband was a Parsi (Zoroastrian) from Gujarat, India. They kept the marriage secret for as many as 10 years because of the fear that Shyama's career would suffer if her marriage became known; in those days, it was thought that the fan following of female stars became less as soon as they married. The marriage was revealed to the public shortly before the birth of their first child, their elder son. The couple had three children, two sons, Faroukh and Rohinton, and a daughter Shirrin. Fali Mistry died in 1979, thereafter she continued to stay in Mumbai.[6]

Shyama's close friends were actress Ameeta and Johnny Walker. Nasirr Khan, Johnny Walker's son, expressed his grief on hearing the news of her death. In an interview with Mid-Day, he said, "It's really disheartening to know about the demise of Shyama aunty. She had done several films with my father and in a lot of them she was opposite him also. In fact, in the film that was made on his name "Johnny Walker", she was the heroine with him. [7]

Shyama died on 14 November 2017 due to a lung infection at the age of 82.[8] She is buried at Badakabarastan, Marine Lines.[citation needed]

Share
Retrieved from "https://en.everybodywiki.com/index.php?title=Shyama&oldid=820049"
Categories:
Hidden categories:
This page was last edited on 19 June 2020, at 16:29.
Content is available under License CC BY-SA 3.0 unless otherwise noted.
This page has been accessed 1,163 times.
Privacy policy
About EverybodyWiki Bios & Wiki
Disclaimers