Nirupa Roy (born Kokila Kishorechandra Bulsara; Gujarati: નિરુપા રોય; 4 January 1931 – 13 October 2004) was an Indian actress who had appeared in Hindi films. Noted for her portrayals of tragedy and sorrow, Roy was idolized for her acting ability,[1] and was often called the "Queen of Misery" in Hindi film circles. Roy was active from 1946 to 1999, and was best known renowned for playing motherly roles.[2][3] Roy appeared in over 250 films, and won three Filmfare Awards throughout her career, as well as being nominated for one. In 2004, Roy received the Filmfare Lifetime Achievement Award.

Roy was born as Kokila Kishorechandra Bulsara in Kalwada, Valsad, Gujarat. She married to Kamal Roy at the age of 15, and promptly moved to Mumbai. Upon entering the film industry, she changed her name to Nirupa Roy. 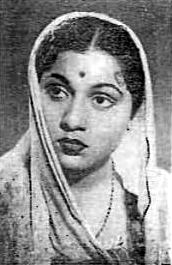 In 1946, Roy and her husband responded to an advertisement in a Gujarati paper looking for actors. She was selected and started her acting career with the Gujarati film Ranakdevi. The same year she acted in her first Hindi film Amar Raj. One of her popular films was Do Bigha Zamin (1953). She largely played mythological characters in the films of the 1940s and 50s. Her image of a goddess was very strong and people would visit her home and seek her blessings. Among her co-stars were Trilok Kapoor (with whom she played in eighteen movies)[4]), Bharat Bhushan, Balraj Sahni, and Ashok Kumar.

In the 1970s, her role as mother to the characters played by Amitabh Bachchan and Shashi Kapoor made her name synonymous to the impoverished suffering mother. Her role in Deewaar (1975) and its dialogues with reference to a mother and son are used as clichés.

In her marriage with Kamal Roy, she had two children, named Yogesh and Kiran Roy.[5] In the years following her death, they engaged into a dispute over Roy's property and belongings, which has received much attention throughout news and media.[6][7]

Several tributes and articles have been made in Roy's memory.[9] Her dialogues from the film Deewaar became iconic,[10] and her acting in the film along with her other notable films are considered to be a landmark in Hindi cinema.[11]

Share
Retrieved from "https://en.everybodywiki.com/index.php?title=Nirupa_Roy&oldid=820035"
Categories:
Hidden categories:
This page was last edited on 19 June 2020, at 15:26.
Content is available under License CC BY-SA 3.0 unless otherwise noted.
This page has been accessed 766 times.
Privacy policy
About EverybodyWiki Bios & Wiki
Disclaimers