The Nuttery Entertainment is a Swedish independent video game development company and animation producer[1]. The company has its headquarters in Karlstad, Sweden. The studio is currently in working on Galaga Chronicles[2], an animated series, and the video game Whiskey & Zombies[3].

The company was founded in 2016 by two former executives at Assorted Nuts Animation Studios, Magnus Jansson and Erik Öhrner.[4] The company also has offices in Los Angeles[5].

In February 2017, at the Game Developer Conference in San Francisco, the company announced its first project Whiskey & Zombies[6], a top-down, four-person local multiplayer game[7]. The game is in development and intended for release on PC and consoles[8].

In July 2018, the company announced that screenwriter/producer Roberto Orci will executive producer Galaga Chronicles and Emmy award-winning animation studio ShadowMachine will handle the production[11]. The series is currently being shopped for distribution and is expected to be released in late 2019[12]. 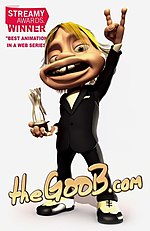 At the 2nd Annual Streamy Awards on Sunday, April 11, 2010, at the Orpheum Theatre in Los Angeles, California, Magnus Jansson was awarded the Streamy Award for 'Best Animation in a Web-Series' by the International Academy of Web Television for the online series The Goob [13][14] after the animated series first became a successful mobile download in 2008, achieving over five million mobile downloads in its first year.

In 2003, Erik Öhrner and Magnus Jansson and the Assorted Nuts Animation Studios team received the Swedish ’Filmstjärnan’ award for significant contributions to the film industry in Värmland.[15]

You have to Sign in or create an account to comment this article !
Retrieved from "https://en.everybodywiki.com/index.php?title=The_Nuttery_Entertainment&oldid=970474"
Categories:
Hidden categories:
This page was last edited on 19 August 2020, at 12:53.
This page has been accessed 188 times.
Content is available under License CC BY-SA 3.0 unless otherwise noted.
Privacy policy
About EverybodyWiki Bios & Wiki
Disclaimers
Mobile view