Underlined Passages is an American rock group that is from Baltimore, Maryland.

Michael Nestor is the former lead singer and guitarist of the post-rock pop band, the Seldon Plan.[1] When the Seldon Plan disbanded in 2013, Nestor and drummer Frank Corl began Underlined Passages. Music journalist Jim Testa says Underlined Passages "almost sound as if this music has emerged through a time warp from the heyday of Eighties college rock, with its melliflous reverb'd vocals and easy going pop jangle," and they draw comparison to the music of Nada Surf, Sunday's Best, the June Brides, the Icicle Works, Sunny Day Real Estate and Tears for Fears.[2][3] They released their first full-length album, Underlined Passages on 14 April 2015, with contributions from Chris Shelley on percussion, Erin Snedecor on cello and vocals from Jeremy Ragsdale.[4] A review by Deborah Draisin in Jersey Beat says "the album mournfully passes through loneliness and optimism," and summarizes that "a late night listen could result in some serious ennui[;] the album is perfectly mixed and very easy on the ears."[4] The Big Takeover notes that after the release of their self-titled album, Underlined Passages began "developing a reputation for their guitar-driven and lush, emotionally intense music."[5] In 2015, they signed with independent record label Mint 400 Records, and digitally released their album, and Nestor was joined by drummer Jamaal Turner. 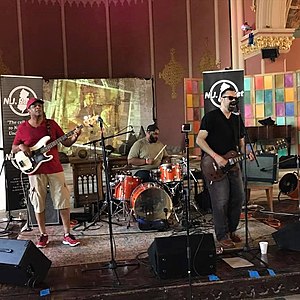 Underlined Passages released their second full-length album, The Fantastic Quest, on 6 April 2016. A review from Dagger says that the album has "some pretty sweet pop music," and opines "I hate saying that a record sounds "fresh" but yeah, these guys adding some much-needed quality into the pop scene does sound fresh."[6] Colin McGuire of Frederick News-Post describes the album as "unassuming [and that] it feels so humble at times, you can almost picture a set of sad eyes looking up at you while all these songs are being performed." He likens the song "Everyone Was There" to "90s alt-rock that at one time would have been perfect for your favorite episode of 120 Minutes[;] perhaps the most straightforward track of the set, it moves at a mid-tempo that would make Spacehog proud."[7] The single "Calamine" was released on 31 May 2016, and features low register crooning and droning guitars.[8][7] Underlined Passages performed at the 2016 and 2017 North Jersey Indie Rock Festival.[9]

On 15 September 2017, Underlined Passages released their third album Tandi My Dicafi on Mint 400 Records, which New Jersey Stage calls "heavy and ethereal, the eight tracks on the record ebb and flow from softened layers of melody to frenetic shreds of distortion to catchy, twangy pop."[10][11] The track "Your Bedroom" is described in Impose as a "beautifully textured, elegant piece of dream-pop as Underlined Passages craft a whirring, dark atmosphere."[12] The single "Silverlake" is a reference to Silver Lake, Los Angeles, California, an area that inspired Nestor and Turner during the writing and production. Nestor and Turner cite the music of Flying Nun Records as inspiration for the record. In early 2018, Tandi My Dicafi was released as limited edition vinyl of the record ,with bonus tracks "We Lost The Sea (Coda)" and "Interregnum," in conjunction with a tour of the East Coast of the United States.[5]

Retrieved from "https://en.everybodywiki.com/index.php?title=Underlined_Passages&oldid=478542"
Categories:
Hidden categories:
This page was last edited on 13 June 2019, at 22:43.
This page has been accessed 151 times.
Content is available under License CC BY-SA 3.0 unless otherwise noted.
Privacy policy
About EverybodyWiki Bios & Wiki
Disclaimers
Mobile view