Burnside was born to James Burnside (1843-1931) and the former America P. Walker (1855-1931)[2] in rural Bryantsville in Garrard County in central Kentucky. He came to Newellton in 1913 at the age of thirty with his first wife and a daughter, later Jane Burnside Earnest (1911-1973), wife of J. Claude Earnest (1906-1984).[3] Burnside purchased Newellton Grain Elevator[4] and had interests as well in lumber, feed, and the O'Neal and McNamara Hardware Company in Vicksburg, Mississippi. He was a director of the large Panola Company in the Tensas Parish seat of government in St. Joseph.[5] At his peak, Burnside owned 8,500 acres of land. He was the president of the Tensas State Bank and a director of the First National Bank of Vicksburg.[4] Burnside was a Methodist and was affiliated with Rotary International and the Masonic lodge.[5] 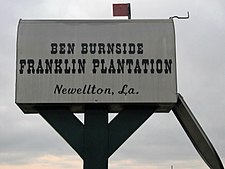 In 1956, Ben Burnside erected at the Franklin Plantation a 14-foot tall giant mailbox which sets atop a thick blue pedestal. Burnside purchased the mailbox in Houston, Texas. It is located three miles north of Newellton off U.S. Highway 65.[8]

Burnside's daughter-in-law, the former Marguerite Brown (1913-2009) of St. Joseph, the wife of Frank Burnside, was a member of the first graduating class of what is now the University of Louisiana at Monroe. She taught school for a time in Newellton and Sunday school at Newellton Union Church. An avid gardener, she and her sister-in-law, Virginia Williams Burnside (1916-2010), wife of Ben Burnside, published the first cookbook of the Newellton Garden club.[11][12]

Burnside, his second wife, and several family members are interred at Legion Memorial Cemetery in Newellton.[3] There is no cemetery record on his first wife, her full name, place and day of birth and death. Nor is the first wife mentioned in Burnside's obituary.

Ben Patton "Benny" Burnside, Jr. (1944-2016), son of Ben, Sr., and Virginia Burnside and grandson of W. W. Burnside, continued to operate Franklin Plantation until his death. A graduate of Newellton High School and Louisiana State University, he raised Charlois cattle and farmed cotton, corn, soybeans, and wheat. He and his wife, the former Carolyn Wallace, have a son, Ben, III, and wife, Jennifer, of Newellton, and two daughters, Dr. Virginia Burnside Correil and husband, Dr. Kemp Correil of Lafayette, and Hester Jane Burnside of West Monroe.[13]

Others articles of the Topics Biography AND Kentucky : A. B. George

Others articles of the Topic Kentucky : A. B. George

Share
Retrieved from "https://en.everybodywiki.com/index.php?title=W._W._Burnside&oldid=979287"
Categories:
Hidden categories:
This page was last edited on 22 August 2020, at 00:40.
Content is available under License CC BY-SA 3.0 unless otherwise noted.
This page has been accessed 1,969 times.
Privacy policy
About EverybodyWiki Bios & Wiki
Disclaimers