As with some other championship belts unveiled in 2016, the base design is similar to the WWE Championship, with notable differences.[12] Instead of a large cut out of the WWE logo, the center plate is modeled with Arabic pattern with the WWE logo in the center. Like the WWE Championship belt and other belts introduced in 2016 and 2017, the Greatest Royal Rumble Championship belt features two side plates, both separated by gold divider bars, with removable round sections that can be replaced with the current champion's logo; the default plates feature the official logo of Saudi General Sports Authority which is identical to the national emblem of Saudi Arabia. The plates are on a green leather strap resembling the color of the national flag of Saudi Arabia. 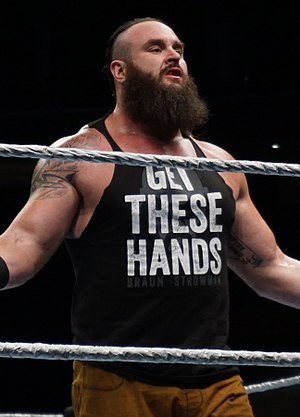 As of April 14, 2021, there has been one reign. The inaugural and current champion is Braun Strowman.

Retrieved from "https://en.everybodywiki.com/index.php?title=WWE_Greatest_Royal_Rumble_Championship&oldid=979407"
Categories:
Hidden categories:
This page was last edited on 22 August 2020, at 01:32.
This page has been accessed 626 times.
Content is available under License CC BY-SA 3.0 unless otherwise noted.
Privacy policy
About EverybodyWiki Bios & Wiki
Disclaimers
Mobile view