Church of the Genuine Orthodox Christians of Greece

Greek Old Calendarists (Greek: Έλληνες Ορθόδοξοι Παλαιοημερολογίτες), also known as "Genuine Orthodox Christians" (GOC; Γνήσιοι Ορθόδοξοι Χριστιανοί), are groups of Old Calendarist Orthodox Christians who remained committed to the traditional Orthodox practice and are not in communion with many other Orthodox churches such as the Orthodox Church of Greece, the Patriarchate of Constantinople, or the Church of Cyprus.[11] The split began with a disagreement over the abandonment of the traditional church calendar (also called the Julian calendar) in preference to the adoption of the Revised Julian calendar, which is similar to the papal Gregorian calendar but will pull ahead by one day in the year 2100,[12] and over other liturgical reforms that were introduced.[13]

Until 1923 the Eastern Orthodox Church universally used the Julian calendar, whereas the Roman Catholic Church, under Pope Gregory XIII, conducted a calendar reform and adopted the mediaeval Gregorian calendar in 1582. The difference between the two calendars is 13 days between 1900 and 2100.

For civil and governmental uses, the Julian calendar remained the official calendar in most Orthodox Christian nations until the early 20th century. The Gregorian calendar was adopted for civil uses by Bulgaria in 1916, the Ottoman Empire in 1917, Soviet Russia in 1918 and Romania and Yugoslavia in 1919. Greece officially adopted the "political calendar", a system devised in 1785, on 17 February/1 March 1923. This dropped all centennial leap years except those giving remainder 0 or 400 on division by 900. With the growing acceptance of this calendar, it was realised that it would diverge from the Gregorian within eighty years, and steps were taken to ameliorate this.

In May 1923, the controversial Pan-Orthodox Congress of Constantinople [fr], called by Patriarch Meletius IV of Constantinople, adopted this calendar under the name of Revised Julian calendar, incorporating a modification of Serbian astronomer Milutin Milanković which ensured it would not diverge from the Gregorian for a further 800 years. This replaced the tabular Easter of the Julian calendar with the astronomical Easter. Not all Orthodox churches were represented at the congress or adopted its decisions, and the Russian Orthodox Church and other Orthodox churches, governing a majority of Orthodox Christians, have continued to use the Julian calendar liturgically to this day. In 1924, the Synod of Bishops of the Church of Greece, following the lead of other Orthodox churches, voted to accept the Revised Julian calendar for fixed feasts, maintaining the traditional Julian calendar Paschalion for calculating the date of Pascha and all of the moveable feasts dependent on it.

The calendar change was not without controversy. Dissent arose from among both clergy and laity, encouraged by countless priests and monks from all over Greece and Mount Athos who traveled throughout Greece preaching in churches and serving as confessors, or spiritual guides, to thousands of Christians. On Mount Athos the Julian calendar is used to this day. In 1935, three bishops from the Church of Greece returned their dioceses to the Julian calendar, consecrated (ordained) four like-minded clergy to episcopal dignity, created the church of the "Genuine Orthodox Christians" (Greek: Εκκλησία των Γνησίων Ορθοδόξων Χριστιανών - Γ.Ο.Χ.), and declared that the official Orthodox Church of Greece had fallen into schism. By 1937, the movement split within itself over the question of whether or not Orthodox jurisdictions that had adopted the Revised Julian calendar were still Orthodox.

After a largely successful grassroots effort to resist the Greek state's new doctrine and its new calendar that originated in Western Christendom, the popularity of the old calendar was attacked. The Church of Greece is the official state church and resorted to the use of state power to suppress the movement. By the 1960s and 1970s, the ecumenical activities of a number of Orthodox leaders infused the Old Calendar Church with new followers in Greece, particularly in 1965–72 when the monasteries of Mount Athos broke communion with the Patriarchate of Constantinople. The Old Calendarists were relatively more successful in the United States, where religion is not regulated by the state.

The Old Calendarists went their own way without further official recognition from the broader Orthodox communion until 1960, when the Russian Orthodox Church Outside Russia (ROCOR) consecrated new bishops for one of the two major Old Calendarist jurisdictions. ROCOR recognized the other major jurisdiction in 1971, consecrating bishops for them as their apostolic succession had previously been through a single bishop (Matthew) which is dubious in the Orthodox Church. However, excepting for groups split-off from ROCOR, no official inter-communion exists between the Greek Old Calendarists and ROCOR at the present day, due to the recent reunification of ROCOR and the Russian Orthodox Church (Moscow Patriarchate). 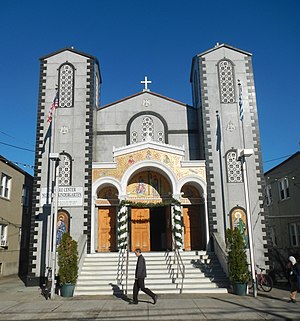 Cathedral in New York built by the Genuine Orthodox Church

In 1998, plagued by moral and financial scandals, two bishops who had broken off from the Church of the Genuine Orthodox Christians in the United States were re-baptized and re-ordained by the Ecumenical Patriarchate and put under the leadership of the Greek Orthodox Church in the U.S. (which uses the Revised Julian calendar). In exchange, the few priests that went with them were accepted as Orthodox priests, and their churches were allowed to maintain their use of the Julian calendar. Later these parishes were forced to switch to the Revised Julian calendar although allowed to remain using their more traditional liturgy.

In the present day, there are five major Old Calendarist divisions present in Greece, three Florinite and two Matthewite, all of which have parishes in many other countries. Among the Florinites, the largest is the Church of the Genuine Orthodox Christians of Greece (GOC) under Archbishop Kallinikos (Sarantopoulos). Another is the Holy Metropolitan Synod of Genuine Orthodox Christians of the Patristic Calendar (GOC-Avlona) under Metropolitan Angelos (Anastasiou). The third Florinite synod is the Makarian (or Lamian) Synod under Metropolitan Makarios (Kavakides). Among the Matthewites, are the Synod of Archbishop Nicholas of Athens, another called the Gregorian Synod, and a third of Metropolitan Kirykos.

The number of days by which the Gregorian calendar differs from the Julian calendar is currently 13, but will increase to 14 in 2100. Over the course of future centuries, the difference will continue to increase, limitlessly.

Greek Old Calendarists adhere to traditional Greek Orthodox practices. While they are called (and might informally call themselves) "Old Calendarist," many maintain that they have not separated over a mere calendar. Instead, the calendar is a symptom of what has been called "the pan-heresy of ecumenism." Old Calendarist Orthodox Christians hold that the participation of many local Orthodox Churches in the modern ecumenistic movement is theologically problematic. Some have argued that even the calendar is a matter of dogma since it has historically manifested the unity and catholicity of the Church and that the reformation of the Church Calendar in 1924 was unilaterally adopted and was connected with the beginning of Orthodox participation in the modern ecumenical movement. The adoption of the Gregorian calendar has been anathematized by three Pan-Orthodox Councils in the 16th century. Some Old Calendarists maintain that they have "walled themselves off" from larger Orthodox jurisdictions to protect Orthodoxy from heretical innovations in practices and doctrine.

Other than the calendar issue, Old Calendarists generally maintain the rites and beliefs of the Church of Greece, although there are other important differences on Baptism and the Oriental Orthodox. Each church rejects the leaders of the other. Some accept baptisms performed by the other church. Officially, however, each side usually receives the members of the other through chrismation (confirmation).

Retrieved from "https://en.everybodywiki.com/index.php?title=Church_of_the_Genuine_Orthodox_Christians_of_Greece&oldid=820372"
Categories:
Hidden categories:
This page was last edited on 19 June 2020, at 18:05.
This page has been accessed 220 times.
Content is available under License CC BY-SA 3.0 unless otherwise noted.
Privacy policy
About EverybodyWiki Bios & Wiki
Disclaimers