Since May 2018, the Church′s status has been under examination by the Ecumenical Patriarchate of Constantinople.

The Archbishopric of Ohrid circa 1020

Following the fall of the First Bulgarian Empire, Byzantine Emperor Basil II acknowledged the autocephalous status of the Bulgarian Church and set up its boundaries, dioceses, property and other privileges. The Archibishopric was seated in Ohrid in the Byzantine theme of Bulgaria and was established in 1019 by lowering the rank of the autocephalous Bulgarian Patriarchate and its subjugation to the jurisdiction of the Patriarchate of Constantinople.[5][6] In 1767 the Archbishopric was abolished by the Ottoman authorities and annexed to the Patriarchate of Constantinople. Efforts were made throughout the nineteenth and the first part of the twentieth centuries to restore the Archdiocese, and in 1874 it became part of the newly established Bulgarian Exarchate. The Christian population of the bishoprics of Skopje and Ohrid voted in 1874 overwhelmingly in favour of joining the Exarchate, and the Bulgarian Exarchate became in control of most of the Macedonian region.

The first modern assembly of Macedonian clergy was held near Ohrid in 1943.[7] In 1944, an Initiative Board for the organization of the Macedonian Orthodox Church was officially formed.[1] In 1945, the First Clergy and People's Synod met and adopted a Resolution for the restoration of the Ohrid Archbishopric as a Macedonian Orthodox Church. It was submitted to the Serbian Orthodox Church, which since 1919 had been the sole church in Vardar Macedonia. The resolution was rejected, but a later one, submitted in 1958 at the Second Clergy and People's Synod, was accepted on June 17, 1959 by the Serbian Orthodox Church under pressure from the Socialist authorities. Dimitrija Stojkovski, a Macedonian, was appointed the first archbishop of Ohrid and Metropolitan of Macedonia under the name Dositheus II.[1]

At its third synod in 1967, on the bicentennial anniversary of the abolition of the Archbishopric of Ohrid, the Macedonian Church proclaimed its autocephaly (full administrative independence). The Serbian Church bishops denounced the decision and condemned the clergy as schismatic.[4] For all the subsequent efforts to gain recognition, the autocephaly of the Macedonian Church is not recognized by other canonical Orthodox churches in defense of Serbian opposition.[1] 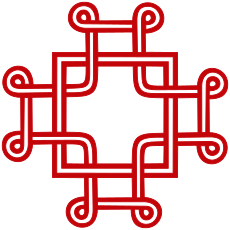 Macedonian Cross - one of the symbols of the church.

Since the breakup of Yugoslavia (the 1990s), the Serbian Patriarchate has sought to restore its control over the Macedonian Church.[8] The two Churches had negotiated the details of a compromise agreement reached in Niš, Serbia, in 2002, which would have given the ethnic Macedonians a de facto independent status just short of canonical autocephaly. The agreement was signed and agreed upon by three Bishops in the Macedonian Orthodox Church (Metropolitan Petar of Australia, Metropolitan Timotej of Debar and Kicevo; and Metropolitan Naum of Strumica). After government officials exerted pressure on the clergy of the MOC for accepting the agreement, the Bishops later reneged on the agreement, leaving only Archbishop Jovan of Ohrid from the Macedonian side in agreement. Suddenly the signed agreement was rejected by the Macedonian government and the Holy Synod of MOC. In turn, the Serbian Orthodox Church granted full autonomy to the Orthodox Ohrid Archbishopric, its branch in Macedonia, in late May 2005 and appointed Jovan as its Archbishop.

The later chain of events turned into a vicious circle of mutual accusations and incidents involving SOC and, partly, the Serbian government on one side, and MOC, backed by the Macedonian government on the other. The Macedonian side regarded Jovan as a traitor and Serbian puppet. Jovan complained of a new state-backed media campaign against his Church.[9] The government has denied registration to his organisation,[10] and launched a criminal case against him. He was arrested, removed from his bishopric and then expelled from the country and later sentenced to 18 months in prison[11] and jailed[12] with "extremely limited visitation rights".[13]

In turn, SOC denied a Macedonian delegation access to the monastery of Prohor Pčinjski, which was the usual site of Macedonian celebration of the national holiday of Ilinden (literally meaning St. Elijah Day) on August 2[14] and the site where the First Session of ASNOM was held. Macedonian border police often denied Serbian priests entry into the country in clerical garb.[15]

On 12 November 2009, the Macedonian Orthodox Church added "Ohrid Archbishopric" to its official name and changed its coat of arms[16] and flag.

On May 14th 2018 Bulgarian Orthodox Church decided to decline the invitation from the Macedonian Orthodox Church to participate in the festivities celebrating the 1000th anniversary of the establishment of the Archbishopric of Ohrid. They also declined to send a representative to the celebration.[22]

In late May 2018, the Ecumenical Patriarchate of Constantinople announced it had accepted the request from Skopje to examine the canonical status of the Ohrid Archbishopric.[23][24]

On 13 January 2020, the Ecumenical Patriarch Bartholomew received North Macedonia′s prime minister Oliver Spasovski and his predecessor Zoran Zaev.[25] According to the Ecumenical Patriarchate′s statement, "The purpose of the visit was to examine the ecclesiastical problem of the country. The previous stages of the matter were discussed during the meeting."[26] It was announced that the Patriarch would invite both the Serbian Orthodox Church and the Church of Skopje to a joint meeting in a bid to find a mutually acceptable solution to the country’s ecclesiastical issue.[26] Map of the eight dioceses of North Macedonia (2013-present)

The Macedonian Orthodox Church has about 1,200 churches in North Macedonia organized in 10 eparchies.

Since October 1999, the Primate of the Macedonian Orthodox Church has been Archbishop Stephan of Ohrid and Macedonia.

The Primate of the Church presides over the Holy Synod of Hierarchs of the church, consisting of 10 metropolitans and 2 titular (vicar) bishops.

Dioceses on the territory of North Macedonia

Outside the country, the church is active in 3 dioceses in the Macedonian diaspora. The 10 dioceses of the church are governed by ten Episcopes, with around 500 active priests in about 500 parishes with over 2000 churches and monasteries. The church claims jurisdiction of about twenty living monasteries, with more than 100 monks.

Church calendars follow the old Julian Calendar, and use the archaic names of the months of the year instead of the common Latin-derived names

Retrieved from "https://en.everybodywiki.com/index.php?title=Macedonian_Orthodox_Church_–_Ohrid_Archbishopric&oldid=820452"
Categories:
Hidden categories:
This page was last edited on 19 June 2020, at 20:43.
This page has been accessed 261 times.
Content is available under License CC BY-SA 3.0 unless otherwise noted.
Privacy policy
About EverybodyWiki Bios & Wiki
Disclaimers