The start of the Patriarchate can be traced to the Greco-Turkish War. In 1922 a pro-Turkish Orthodox group, the General Congregation of the Anatolian Turkish Orthodox (Umum Anadolu Türk Ortodoksları Cemaatleri) was set up with the support from the Orthodox Bishop of Havza, as well as a number of other congregations[2] representing a genuine movement among the Turkish-speaking, Orthodox Christian population of Anatolia[3] who wished to remain both Orthodox and Turkish.[4] There were calls to establish a new Patriarchate with Turkish as the language of worship.[5]

On 15 September 1922 the Autocephalous Orthodox Patriarchate of Anatolia was founded in Kayseri by Pavlos Karahisarithis, a supporter of the General Congregation of the Anatolian Turkish Orthodox.[3] Pavlos Karahisarithis became the patriarch of this new church, and took the name Papa Eftim I. He was supported by 72 other Orthodox clerics.[6]

The same year, his supporters, with his tacit support assaulted Patriarch Meletius IV of Constantinople on 1 June 1923.[7]

On 2 October 1923 Papa Eftim besieged the Holy Synod and appointed his own Synod. When Eftim invaded the Greek Orthodox Patriarchate he proclaimed himself "the general representative of all the Orthodox communities" (Bütün Ortodoks Cemaatleri Vekil-i Umumisi).

With a new Ecumenical Patriarch Gregory VII elected on 6 December 1923 after the abdication of Meletius IV, there was another occupation by Papa Eftim I and his followers, when he besieged the Patriarchate for the second time. This time around, they were evicted by the Turkish police.[8]

In 1924, Karahisarithis started to conduct the liturgy in Turkish, and quickly won support from the new Turkish Republic formed after the fall of the Ottoman Empire.[9] He claimed that the Ecumenical Patriarchate of Constantinople was ethnically centered and favored the Greek population. Being excommunicated for claiming to be a bishop while still having a wife (married bishops are not allowed in Orthodoxy) Karahisarithis, who later changed his name into Zeki Erenerol, called a Turkish ecclesial congress, which elected him Patriarch in 1924.

On 6 June 1924, in a conference in the Church of the Virgin Mary (Meryem Ana) in Galata, it was decided to transfer the headquarters of the Turkish Orthodox Patriarchate from Kayseri to Istanbul. In the same session it was also decided that the Church of Virgin Mary would become the Center of the new Patriarchate of the Turkish Orthodox Church.[3]

Karahisarithis and his family members were exempted from the population exchange as per a decision of the Turkish government,[10] although there was not the exemption for either Karahisarithis' followers or the wider communities of Turkish-speaking Christian that was hoped for.[11] Most of the Turkish-speaking Orthodox population remained affiliated with the Greek Ecumenical Patriarchate of Constantinople.

Alparslan Türkeş took an interest in the Patriarchate during Eftim I rule. Türkeş would later establish the "Cumhuriyetçi Köylü Millet Partisi" (Republican Peasant and Nation Party, which evolved to become the Nationalist Movement Party). Türkeş was also involved in the post 1960 coup government although this was stymied when he fell out of favour with the government and was sent abroad as a military attache.[12]

In 1962 when Father Eftim fell very ill, his elder son Turgut (birth name Yiorghos) was ordained as Turkish Orthodox patriarch taking the name Papa Eftim II. Eftim I survived with failing health until 1968 when he died. Eftim II died in 1991 and Karahisarithis' younger son, Selçuk Erenerol, became the new patriarch taking the title Papa Eftim III, but he renounced office protesting over growing links between the Turkish state and the Greek Patriarch of Istanbul and Turkish attempts to join the European Union.[9]

Attempts of integrating the Gagauz to the church[edit]

There have been a number of attempts from the 1930s into the 21st century to tie the Turkish Orthodox Patriarchate with the ethnically Turkic, Greek Orthodox Gagauz minority in Bessarabia.[12]

In the 1930s, attempts were made to integrate the adherents to the church by Gagauz Christians within Turkey as a congregation for the church. Hamdullah Suphi Tanriöver, Turkish ambassador to Romania tried to attract a number of communities in Gagauzia and Bessarabia regions, at the time integrated with Romania, presently part of the republic of Moldova. Gagauz, Christian Orthodox people spoke a Turkish dialect known as Gagauzo, written using the Greek alphabet. In spite of the similarities with the Greek Orthodox, Turkish-speaking people native to the Cappadocia regions of Anatolia in Turkey. Tanriöver's plans were to establish Gagauz communities in the Turkish region of Marmara, such that these communities would be attached to Autocephalous Turkish Orthodox Patriarchate founded by Eftim I. In 1935, about 70 Gagauz took the offer of the Turkish diplomat and settled down in Turkey. The new immigrants facing a lot of hardship finally converted to Islam. Eftim I was furious sending a letter to the diplomat Hamdullah Suphi Tanriöver, in which asked: "Where are my 70 devotees?" His failure to conserve the Gagauz Christians and to reintegrate them within his church was a great source of deception for him. With the onslaught of the Second World War, plans were put on hold and no further Gagauz were offered to join the church.

During the 8th Friendship, Brotherhood and Cooperation Congress of Turkish States and Communities held 24–26 March 2000, calls were made particularly to the Gagauz, but also to Moldavian Orthodox Christian communities of Turkish origin in general to consider joining the Turkish Orthodox Church, but this plan was never realized. The efforts of Eftim III however were recognized by the ultranationalist Turkish movement as a valid attempt to reunite Turkic nations with their origin.

A similar project was put into motion in October 2018, when President Erdoğan visited Moldova and toured the Autonomous Territorial Unit of Gagauzia.[13]

Links to the Ergenekon affair[edit]

On 22 January 2008, Sevgi Erenerol(tr), the granddaughter of Papa Eftim I the founder of the church, and the daughter of Papa Eftim III and the sister of the current primate Papa Eftim IV was arrested for alleged links with a Turkish nationalist underground organisation named Ergenekon. At the time of her arrest, she was the spokeswoman for the Patriarchate. It was also alleged that the Patriarchate served as headquarters for the organisation. Sevgi Erenerol was well known for her nationalist activities and antagonism to the Ecumenical Greek Patriarchate and the Armenian Apostolic Church. During the time of Alparslan Türkeş, she had run as a parliamentary candidate for the MHP, the political arm of the Grey Wolves .[14] 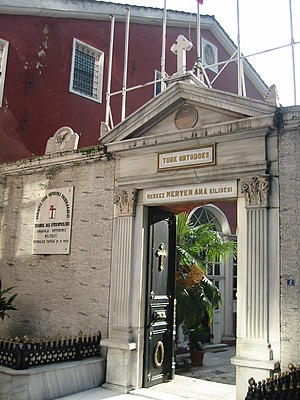 Today, three churches are owned by Turkish Orthodox Patriarchate and all of them are located in Istanbul. Besides Papa Eftim IV, one priest and three deacons serve the community.

In 1924, Eftim I acquired the Hristos Church illegally from the owner, the Ecumenical Patriarchate. Hristos Church was returned to the Ecumenical Patriarchate in 1947, after a legal case, only to be confiscated and bulldozed later on for road enlargement. Compensation for the bulldozed church was paid however to the Erenerol family foundation instead of the Eastern Orthodox community.[13]

Besides these churches, the Turkish Orthodox Patriarchate owns an important number of the commercial premises, an office building and a summer palace. They are run under the name of "Independent Turkish Orthodox Foundation".

The Turkish Orthodox Church in United States was an Old Catholic group of 20 predominantly African American churches in the United States loosely linked to the Patriarchate. It formed in 1966 under Christopher M. Cragg, an African American physician. He was consecrated by Papa Eftim II in 1966 with the name of Civet Kristof. It continued to exist throughout the 1970s, but fell away in the early 1980s when Cragg opened a clinic in Chicago.[22]

Retrieved from "https://en.everybodywiki.com/index.php?title=Turkish_Orthodox_Church&oldid=820458"
Categories:
Hidden categories:
This page was last edited on 19 June 2020, at 20:48.
This page has been accessed 267 times.
Content is available under License CC BY-SA 3.0 unless otherwise noted.
Privacy policy
About EverybodyWiki Bios & Wiki
Disclaimers