From EverybodyWiki Bios & Wiki
Jump to:navigation, search
Not to be confused with Mumtaj.

Mumtaz or Mumtaz Madhvani (née Askari; born 31 July 1947[1]) is a Hindi Film actress. She won a Filmfare Award for Best Actress for her character in Khilona in 1971. Though she started with small supporting roles, she later rose up the hierarchy, and worked with all the top actors of her time, in the lead roles. She is remembered as one of the best versatile actresses and dancers as well as a sex symbol from 1965 to 1977. She is still recognised as a diva of her times.She is best known for her 10 films opposite Rajesh Khanna.

Mumtaz was born to Abdul Saleem Askari (a dry fruits vendor) and Shadi Habib Agha who hailed from Mashhad, Iran. They got divorced just one year after she was born.[2][3][4] Her younger sister is actor Mallika who was married to wrestler and Indian actor Randhawa - younger brother of wrestler and actor Dara Singh.[5] 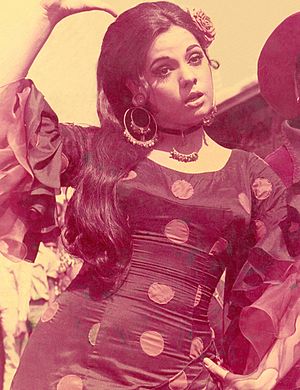 Mumtaz in a scene from Tangewala.

Mumtaz appeared as a child actress in Sone Ki Chidiya (1958). As a teenager she acted as an extra in Vallah Kya Baat Hai, Stree and Sehra in the early 1960s. As an adult, her first role in A-grade films was that of the role of the sister of the hero in O. P. Ralhan's Gehra Daag.[6] She got small roles in successful films such as Mujhe Jeene Do. Later, she got the role of the main lead heroine in 16 action films, including Faulad, Veer Bhimsen, Tarzan Comes to Delhi, Sikandar-E-Azam, Rustom-E-Hind, Raaka, and Daku Mangal Singh, with freestyle wrestler Dara Singh, and was labelled as a stunt-film heroine.[by whom?] In the films that Dara Singh and Mumtaz did together, Dara's remuneration was INR 450,000 per film, and Mumtaz's salary was INR 250,000 per film.[7]

It took Raj Khosla's blockbuster Do Raaste (1969), starring Rajesh Khanna, to finally make Mumtaz a full-fledged star. Although Mumtaz had a minor role, director Khosla filmed four songs with her.[8] The film made her popular, and she acknowledged that even though she had a small role, it was still one of her favourite films.[6] In 1969, her films Do Raaste and Bandhan, with Rajesh Khanna, became top grossers of the year, earning around 65 million and 28 million respectively.[9] She played Rajendra Kumar's leading lady in Tangewala. Shashi Kapoor, who had earlier refused to work with her in Saccha Jootha because she was a "stunt-film heroine", now wanted her to be his heroine in Chor Machaye Shor (1973). She acted opposite Dharmendra as the lead heroine in films such as Loafer and Jheel Ke Us Paar (1973).

She won the Filmfare Best Actress Award for one of her favourite films Khilona in 1970, and she was "very happy that the audience accepted her in an emotional role".[6] Mumtaz frequently acted with Feroz Khan in hits such as Mela (1971), Apradh (1972) and Nagin (1976). Her pairing with Rajesh Khanna was the most successful in a total of 10 films.[10] She quit films after her film Aaina (1977) to concentrate on her family. She made a comeback 13 years later with her final film Aandhiyan in 1990.

Mumtaz married businessman Mayur Madhvani in 1974. They have two daughters, one of whom, Natasha, married actor Feroz Khan's son Fardeen Khan in 2006.

Shammi Kapoor loved her and wanted to marry her too but Mumtaz was not ready to leave her filmy career at her early age as Kapoor didn't want from his wife to work in the film industry after getting married.[11][12]

During her career, she was awarded with one Filmfare Award for Best Actress, out of three nominations, and one BFJA Award for Best Supporting Actress.[14]

Share
Retrieved from "https://en.everybodywiki.com/index.php?title=Mumtaz_(actress)&oldid=2666996"
Categories:
Hidden categories:
This page was last edited on 15 June 2022, at 02:12.
Content is available under License CC BY-SA 3.0 unless otherwise noted.
This page has been accessed 1,375 times.
Privacy policy
About EverybodyWiki Bios & Wiki
Disclaimers