Peter Wang (Chinese: 王孟杰; pinyin: Wáng Mèngjié; November 9, 2002 – February 14, 2018) was an American Junior Reserve Officers' Training Corps (JROTC) cadet and high school student who was killed during the Stoneman Douglas High School shooting on February 14, 2018.[2] Wang was born in Brooklyn and raised in Broward County, Florida, and was a freshman at the time of his death. During the shooting, Wang helped students escape the gunfire by holding an exit door open and pushing victims out.[3] For his actions, Wang was posthumously awarded the ROTC Medal for Heroism and admitted to West Point—a very rare act granted to potential candidates whose actions exemplified the tenets promoted by the academy.[4]

Wang was born on November 9, 2002[5] in Brooklyn, New York City to Chinese-American restaurateurs. He had two younger brothers.[6] He was raised in Broward County, Florida, and attended Pentab Academy from pre-kindergarten to second grade, a private academy in Miami Gardens.[2] Wang's family owned a Chinese restaurant across from his former private school. Wang attended Westchester Elementary School and Sawgrass Springs Middle School, both a part of Broward County Public Schools, for his pre-secondary education.[7] He began his freshman year at Marjory Stoneman Douglas High School in 2017, and was an active cadet for the Junior Reserve Officers' Training Corps (JROTC).[8] Wang was planning on attending The United States Military Academy and contributing "service to our country", his neighbor Jesse Pan said.[2] Wang spoke English and Chinese.[7] Wang was wearing his JROTC shirt when he died.[9]

On February 14, 2018, Nikolas Cruz, a 19-year-old former student at Marjory Stoneman Douglas High School, started shooting on campus after pulling the fire alarm. Wang was in the study hall on campus when the school went into code red lock down.[7] While wearing his Junior Reserve Officers' Training Corps uniform, he was reported to have held the door open for students and teachers to escape a building while they heard gunfire.[10] He was fatally shot by Cruz and rushed to a local hospital. His family thought he was missing until they were informed he was killed in the shooting.[11] Wang died at the age of 15 and Cruz was later arrested and charged with 17 counts of capital murder. His funeral was on February 20 in Coral Springs.[12][13]

A petition on the We the People petitioning site of the official whitehouse.gov website was created to ask the United States Armed Forces to have Wang buried with military honors for his role in holding the door open for students and teachers during the shooting.[16] "His selfless and heroic actions have led to the survival of dozens in the area. Wang died a hero, and deserves to be treated as such, and deserves a full honors military burial,"[16] the petition reads. The petition has received over 100,000 signatures, enough to receive a response from the White House,[17] though it is unclear when the petition will receive an answer, as the Trump administration has not answered any petitions on the site since President Donald Trump has been in office due to site maintenance.[18] Several top posts on /r/military, a military message board on Reddit, contained information regarding Wang's funeral for service members and veterans, and a donation program was organized by service members that will be sent to his family.[16] 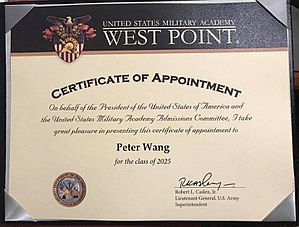 The United States Military Academy posthumously awarded Wang a certificate of appointment and accepted him into the academy as the class of 2025.

Wang was formally recognized for his actions during the shooting in several ways. At the federal level, Wang was awarded the ROTC Medal for Heroism by the U.S. Army.[19] He was also posthumously admitted to the United States Military Academy for the class of 2025, a "very rare" act.[4] In addition, the state of Florida honored Wang by ordering the Florida National Guard to attend his funeral.[20][21] In regards to their decision to posthumously admit Wang, the U.S. Military Academy stated that, "It was an appropriate way for USMA to honor this brave young man."[22][23]

Others articles of the Topics Florida AND United States : East Carolina–UCF football rivalry

Share
Retrieved from "https://en.everybodywiki.com/index.php?title=Peter_Wang_(cadet)&oldid=944020"
Categories:
Hidden categories:
This page was last edited on 11 August 2020, at 08:33.
Content is available under License CC BY-SA 3.0 unless otherwise noted.
This page has been accessed 3,785 times.
Privacy policy
About EverybodyWiki Bios & Wiki
Disclaimers