The Bitter Chills are an American indie rock band that is from New Jersey.

The Bitter Chills are a six-piece indie folk rock band that is from Northern New Jersey, who formed in the year 2011. They play Americana, folk rock and "roots pop" music.[1] Glenn Morrow says their "songwriting and vocal chops could make Marshall Crenshaw jealous," and they draw comparison to the music of singer-songwriters John Wesley Harding, Loudon Wainwright III, and Todd Snider.[2][3] Prior to performing with the Bitter Chills, vocalist and guitarist Matt Cheplic released two solo albums, Don't Let Me Lose My Mind in 2001, and Who Burned the Book of Love, in 2008. Both of the records received airplay on public and college radio stations, and Cheplic performed across the United States of America. He began playing with mandolinist Pietro Ciliberto, as the group Crazy Morgan. Both were teachers at Roselle Catholic High School, and Cheplic notes in an interview with Jersey Beat, that "when I formed the band with Pete, part of the mantra for me was I wanted to do something with more of a sense of humor to it."[4]

They released their first record, entitled Birth Of The Cold, in 2013, which is described as a low-fi acoustic album.[4] Cheplic acknowledges inspiration for Birth Of The Cold from the music of the English pop rock band the Beatles, and Elvis Costello.[1] New Jersey Stage says there are "many reasons to like the Bitter Chills. They have tidy, respectable haircuts. They wear nice clothes on stage, like clean shirts and ties. They're smart enough to help you with homework and standardized tests... and considerate enough to actually do it. And if you're one of those people who still cares about the "listening" part of the music industry, you should know that the Bitter Chills' debut album is a highly enjoyable collection of songs that pays tribute to various styles of roots music."[5] 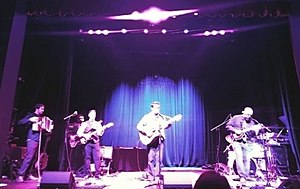 The Bitter Chills, opening for Keller Williams on 1 March 2018.

The Bitter Chills signed with the independent label Mint 400 Records, in 2016. They released the single "Why Not Us?" that year, along with a music video, which was directed by Neil Sabatino.[6] The Bitter Chills performed at the 2016 North Jersey Indie Rock Festival.[7] On 3 February 2017, they released their second full-length album, entitled Feel-Good Songs for Feel-Bad People, also produced, mixed and mastered by Sabatino.[4] The album contains "root music," that features mandolin, upright bass, accordion, piano and acoustic guitars.[8][9]

Jersey Beat's Jim Testa recalls in his review "this Americana group caught my ear at last fall's North Jersey Independent Rock Festival, and their second album more than lives up to that promise. Lots of bands can do catchy twang; the kicker here is the band's everyman sense of humor[;] I must be bad people; these songs left me feeling pretty good."[10] A review by The Fire Note says "the Chills' funny lyrics tape a similar vein of irony and self-deprecating humor that you hear in early Fountains of Wayne songs." He notes the "best pop song here [is] "Why Not Us?"" and adds "Cheplic is quite capable of serious reflections, in fact the underlying emotions of even his funniest songs find a root in the deeper human longings we all share[;] the Bitter Chills have taken a big step forward on this second album, the songs are delivered in a production that raises the bar, yet the emphasis remains on the band's quirky, comical persona and innate musical touch."[3]

For At the Movies, the Bitter Chills do a rendition of "The Power of Love." Jersey Beat editor Paul Silver says, that although he "wasn't crazy about the [original] song back in the 80s," at least the Bitter Chills "give the song a Latin vibe."[11] The song "Nothing but Love, Unfortunately" appears on the compilation album NJ / NY Mixtape.

Retrieved from "https://en.everybodywiki.com/index.php?title=The_Bitter_Chills&oldid=461712"
Categories:
Hidden categories:
This page was last edited on 21 May 2019, at 23:35.
This page has been accessed 342 times.
Content is available under License CC BY-SA 3.0 unless otherwise noted.
Privacy policy
About EverybodyWiki Bios & Wiki
Disclaimers