Fairmont is an American indie rock band that is from New Jersey. They have released ten full-length albums, as well as six EPs, and have also made several tours across the United States of America.

Fairmont is a six-piece rock band, based in North Jersey that formed in 2001. That year, after leaving the punk rock band Pencey Prep, Sabatino signed with Reinforcement Records under the moniker Fairmont, an homage to the Minnesota city. Fairmont was initially a solo acoustic project which Sabatino compared to Dashboard Confessional, and over the years the group became a blend of indie rock and pop.[1] They draw comparison to the music of Seattle rock band Say Hi, lo-fi rock band Guided by Voices, and the lead vocalist for Death Cab for Cutie, Ben Gibbard, and AMP calls Fairmont "indie rock we should all be thankful for."[2]

The debut sixteen-track album, Pretending Greatness is Awaiting, was released on 3 December 2001.[3] A review in Punk Planet compares it to the music of the Weakerthans, saying the "songs border indie and punk rock while keeping it fresh."[4] Work on the second album Anomie was delayed in March 2003, as three of the members quit the night before recording began.[5] Shortly after, former Pencey Prep bassist John McGuire joined Fairmont, as did guitarist Kevin Metz.[6][1] During that year, Fairmont performed at local venues, such as Arlene's Grocery in Manhattan, New York City, with Fighting Gravity and Val Emmich.[7] By 2005, Fairmont made three tours across the United States, in addition to performing locally with Nada Surf and Ted Leo. That same year, they released their third full-length Hell is Other People, an album heavily influenced by McGuire's fondness of bands like the Replacements and Hüsker Dü.[1] The content of the album was conceptually based on Jean Paul Sartre's play, No Exit.[8] It was jointly released by Reinforcement Records and Renfield Records.[9]

Fairmont's fourth full-length Wait & Hope, an up-tempo indie rock album, was released on 12 June 2007.[10][11] It is the last to feature McGuire.[1] Longtime collaborator Teeter Sperber provided vocals for three of the songs, "Fredo," "Dahlia" and "Yearbook." In an interview with Deborah Draisin in Jersey Beat, Sabatino describes it as a "very minimal[ist] album," and Jo-Ann Greene of AllMusic called it their "strongest album to date," adding "regardless of the downer lyrics, the music within takes the band to never before reached heights."[1][10] Wait & Hope is also the last Fairmont album released under its previous indie labels; in 2007 Sabatino founded Mint 400 Records, and retroactively released earlier Fairmont albums.[12]

Keyboardist Christian Kisala joined the group in 2008. After writing songs with a female counterpart in mind, Sabatino contacted friend Suzie Zeldin, as well as Teeter Sperber.[1] Both would appear on the 2008 release Transcendence, which was produced by Bryan Russell.[13] The album appears at No. 52 in Gary Wien's book Are You Listening?, a comprehensive list of the top 100 albums of a decade, which was compiled from a six-month review of over 2,220 releases.[14] It was followed by a national tour supporting Life of Agony frontman Keith Caputo, starting in August 2008.[15][1] The six-track EP The Meadow at Dusk was released on 12"-vinyl in 2009, and debuted on CMJ charts at No. 176. 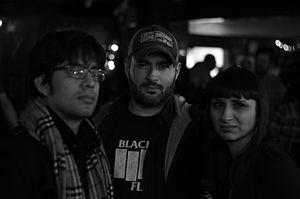 Fairmont in 2013; from left to right: Christian Kisala, Neil Sabatino and Sam Carradori.

In 2010, Fairmont released their sixth album Destruction Creation, and the following year Mint 400 Records compiled a retrospective collection of Fairmont's first decade of releases. The Grand and Grandiose was released in 2013, followed by a live acoustic EP in 2014. For their 2015 album 8½, Christian Kisala moved from Malletkat to Xylarimba and Vibraphone. Fairmont performed at the 2016 North Jersey Indie Rock Festival.[16] As they finished work on 2017's A Spring Widow, Kisala switched solely to Vibraphone, and the band also saw the addition of Matt Cheplic, a current member of the Bitter Chills and bassist Mike Burns who formerly played with Sabatino in the punk band Little Green Men in the 1990's. Their tenth studio album We Will Burn That Bridge When We Get To It was released in 2018, and features Lisa Grabinski on keyboards and vocals. Kisala moved to drums, while longtime drummer Andy Applegate went on hiatus. In January 2019, We Will Burn That Bridge When We Get To It debuted on the NACC radio charts at No. 143, and climbed to No. 126 in its third week; Fairmont's second release to chart on college radio charts.[17]

Retrieved from "https://en.everybodywiki.com/index.php?title=Fairmont_(band)&oldid=474905"
Categories:
Hidden categories:
This page was last edited on 7 June 2019, at 01:28.
This page has been accessed 438 times.
Content is available under License CC BY-SA 3.0 unless otherwise noted.
Privacy policy
About EverybodyWiki Bios & Wiki
Disclaimers