Aisha Chaudhary (27 March 1996 – 24 January 2015)[2] was an Indian author and motivational speaker. She is the author of the book My Little Epiphanies, published one day before her death.[3]

The film The Sky Is Pink is loosely based on her life.

Aisha was the daughter of Niren Chaudhary, the president of South Asia operations of Yum! Brands and Aditi, a mental healthcare worker. She has an elder brother named Ishan Chaudhary and an elder sister Tanya Chaudhary, who died at 7 months old. Aisha was born with severe combined immunodeficiency (SCID). When she was 6 months old, she had to undergo a bone marrow transplant.[4] As a side effect of the medical therapy following bone marrow transplant, she developed a serious illness called pulmonary fibrosis – a type of condition that causes irreversible scarring of the lungs.[5]

Aisha Chaudhary gave inspirational talks from age 15 to the time of her death. She was named an INK Fellow and spoke in the 2011 and 2013 INK Conferences.[6] Aisha was also a speaker at TEDxPune in 2013.

She wrote a book that was published one day before her death.[7][8]

Representation in other media[edit]

The Sky Is Pink, a film based on her life, directed by Shonali Bose and starring Priyanka Chopra Jonas as ADiti Chaudhary, Farhan Akhtar as Niren Chaudhary, Zaira Wasim as the main Aisha Chaudhary and Rohit Suresh Saraf was released theatrically on 11 October 2019.[9][10][11] 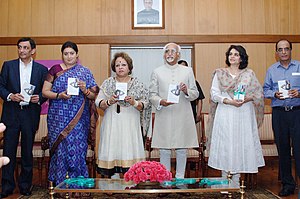 You have to Sign in or create an account to comment this article !
Retrieved from "https://en.everybodywiki.com/index.php?title=Aisha_Chaudhary&oldid=851444"
Categories:
Hidden categories:
This page was last edited on 15 July 2020, at 04:39.
This page has been accessed 32 times.
Content is available under License CC BY-SA 3.0 unless otherwise noted.
Privacy policy
About EverybodyWiki Bios & Wiki
Disclaimers
Mobile view