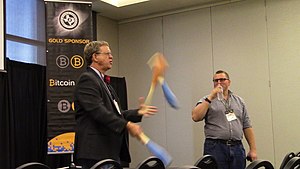 Factom is a blockchain technology company based in Austin, Texas.[2] The company was founded in 2014 by Paul Snow[3] and David Johnston[4] as a blockchain as a service company, using blockchain for data management and security.[5] Its customers include the United States Department of Homeland Security,[6] and the company previously anchored Project Gutenberg.[7] In October of 2016 factom has secured $4.2 mln funding round led by billionaire investor Tim Draper of Draper Associates[8] and another $8 mln in an extended series A funding round in April of 2017.[9]

This article "Factom" is from Wikipedia. The list of its authors can be seen in its historical and/or the page Edithistory:Factom. Articles copied from Draft Namespace on Wikipedia could be seen on the Draft Namespace of Wikipedia and not main one.

Share
Retrieved from "https://en.everybodywiki.com/index.php?title=Factom&oldid=21739"
Categories:
Hidden categories:
This page was last edited on 9 April 2018, at 01:18.
Content is available under License CC BY-SA 3.0 unless otherwise noted.
This page has been accessed 753 times.
Privacy policy
About EverybodyWiki Bios & Wiki
Disclaimers