Garid Gotsbayar (born November 4, 1992), known professionally as Ginjin (pronounced: /ˈɡɪndʒɪn/), is a Mongolian rapper and songwriter. Ginjin is representing the coldest capital city in the world[1][2] - Ulaanbaatar, Mongolia. Together with his group LOI4IXCOH (pronounced: /'Löi-chix-son/) consisting of Ginjin, Lil Thug E and FLA are pioneering Mongolian Rap, Hip hop. This group is also known as the Mongolian Migos.

Garid Gotsbayar was born on November 4, 1992, in Leipzig, Germany to Mongolian parents. When he was 2 years old his parents moved back to Ulaanbaatar, Mongolia. Gotsbayar’s interest in music sparkled already in primary school where he was active in musical and theatrical showcases.

After graduating High School, Gotsbayar wanted to pursue his academic career further. Since his parents owned a tour agency in Mongolia, he chose to study abroad at I-Shou University, Kaohsiung Taiwan at the International Tourism and Hospitality Department. While studying, Gotsbayar would continue making trap music in his free time and released a mixtape called “Kaohsiung’s Most Wanted”. On January 22, 2015 Gotsbayar graduated with a bachelor degree of science in International Tourism and Hospitality Management.

In 2006 Gotsbayar started to write his own lyrics. A year later in 2007 he recorded first song called “220” under the name EZ-Loc. His first album called “Mungu Ol Uls Ulaan Bandana Hot” (2008) sounding like “Mongol Uls (country), Ulaanbaatar City” which could be translated as “Get Money State, Red Bandana City” was published independently and sold out quickly. After the album release he was heavily affiliated with rapper Tsetse and other Vanquish’s members. 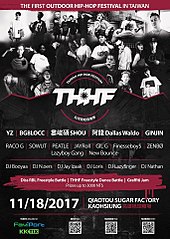 On October 27, 2013 Gotsbayar released his last song under the name EZ Loc called #Ginjin. After that he decided to change his stage name to Ginjin, which could be translated as “chainy or somebody who has many chains”. Since studying in Taiwan and being far away from Mongolia, Gotsbayar decided to improve his English rapping skills by creating songs fully in English. From November 2013 till June 2014 he recorder a mixtape called “Kaohsiung’s Most Wanted” which contained 15 English songs. With having English songs on his repertoire, Ginjin was able to perform multiple shows in Taiwan, most notaibly at Free the Beach in Kenting in front 10,000 people or at Cultural Festival in 2014 and 2015 at Eda Mall. The mixtape wasn’t originally planned to be released but Ginjin finally uploaded it to YouTube in April 2015.

However it wasn’t until the summer 2014 when Mongolian public started to get to know Ginjin. After the release of “Ugzug Saihan Bol Zus Saihan” which could be translated as “as long as the ass is good everything is fine“ Ginjin gained popularity among Mongolians. The song became the summer anthem of Mongolia and reached over 3 million views in a country with a population of 3 million. The single was recorded in Kaohsiung, Taiwan while still studying at university.

In 2017, he released his single called “Pretty Girls Like Trap Music” which influenced Mongolian audience and other rap artists heavily to like trap music much more.

In November 2017 Ginjin returned to Taiwan to headline the first Taiwan Hip-Hop Festival[3] or THHF (台灣嘻哈音樂季). It was held on November 18, 2017 at the Taiwan Sugar Museum in order to promote hip hop culture to the locals. Besides live music acts, THHF featured rap battles and graffiti jam. Debut turnout has been estimated to be around 1000 people. During the festival he established a friendship with YZ, a Taipei based Trap artist and Jay Izaak, an Atlanta producer.

In 2018 Ginjin released multiple singles such as Baiji, Unuudur, Luujin, Chanartai Yum Uuy and gained the title of Trap music|Trap King in Mongolia. As part of LOITOUR with LOI4IXCOH they toured Japan, Korea, Taiwan and China as well as headlined the biggest hip hop festival XMF[4] in Mongolia where they performed in front of 40,000 people. In early 2019 he released two singles Ganbei,[5] meaning "cheers" in Mandarin Chinese and Arasso meaning Alright ? or Understand ? in Korean. The first mentioned was featured on the world famous YouTube channel FCKTHEM. Ganbei is listed in the Asia playlist, which aims to promote a new wave artist from the region. After releasing 7 singles in the first half of 2019, Ginjin[6][7][8][9] performed at the Golden Melody Awards[10][11][12][13] and Festival[14][15][16][17] otherwise known as Taiwan’s Grammy Awards in Taipei. Following this prestigious performance he toured Taiwanese clubs with YZ (Taipei based Trap artist) and headlined Playtime[18][19][20] the biggest music festival in Mongolia.

Ginjin has numerous tattoos all over his body. Ginjin’s first tattoo was a burger, which caught Burger King's attention and made him star in a Burger King 2015 Brazil commercial.[21][22] Parts of the shooting took part in Kaohsiung, Taiwan and in Sao Paolo, Brazil. Three years after that Burger King Mongolia approached him to remix his song “Pretty girls like Trap music” into “Pretty girls like Black Whopper”. Gotsbayar also starred in numerous TV shows such as cooking shows, quiz shows etc.

Ginjin's[23] music is generally categorized as hip hop, or more specifically sub-genres Trap. Ginjin is able to rap in different flows in both Mongolian and English language as well as singing. His music is a mix of American Hip Hop music with Asian elements.


This article "Ginjin" is from Wikipedia. The list of its authors can be seen in its historical and/or the page Edithistory:Ginjin. Articles copied from Draft Namespace on Wikipedia could be seen on the Draft Namespace of Wikipedia and not main one.

Share
Retrieved from "https://en.everybodywiki.com/index.php?title=Ginjin&oldid=895629"
Categories:
Hidden categories:
This page was last edited on 26 July 2020, at 03:26.
Content is available under License CC BY-SA 3.0 unless otherwise noted.
This page has been accessed 2,220 times.
Privacy policy
About EverybodyWiki Bios & Wiki
Disclaimers