Broadside is the name of three fictional characters from the various Transformers continuities in the Transformers franchise.

Broadside's bio presented him as literally getting the worst possible out of his alternate modes. He transforms into a Nimitz-class aircraft carrier, but gets seasick. He transforms into an F/A-18 Hornet fighter jet but doesn't like heights. Despite these handicaps, he is a brave warrior in battle.[1] 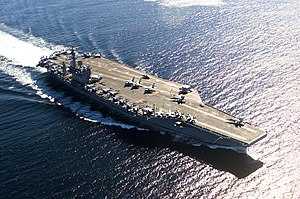 The USS Nimitz aircraft carrier upon which Broadside is based

Broadside is supposedly 300 meters long as an aircraft carrier, however the real USS Nimitz is 332.9 meters long.[2] Oddly the F/A-18 is only 17.1 meters long. The F/A-18 is actually one of the jets found on the Nimitz class carrier.

Broadside appeared only in issue #41 of the U.S. Marvel Transformers comic series, as well as getting a bio page in their Transformers: Universe series of profiles. In issue 41 he appeared among the combined Autobot forces on the moon when they were attacked by the Deceptcions, but never appeared before or after.

Broadside appeared in several issues of the Marvel U.K. comics. His first appearance was during the Target: 2006 saga where he joined The Wreckers alongside fellow Triple Changers Springer and Sandstorm, to serve as replacements for Ultra Magnus, who was on a mission off-world at a critical time.

Following this, he was involved in the battle with Flame in a successful effort to stop the reactivation of the Kalis Engine and Cybertron's resultant destruction. He also travels to Earth with Emirate Xaaron, Sandstorm and Inferno, where they end up battling an alien fire based creature and sending it to Mercury.

During a later mission to stop the mad future Decepticon Galvatron (at the centre of a rift in time and space) that the Wreckers encountered Galvatron and his ally - a clone of Megatron, and the elite squad was routed. Broadside only avoided being killed by Megatron when the future incarnations of Kup and Blurr intervened and distracted Megatron. He later joined up with the other survivors of the Wreckers and Mayhem Attack Squad to form the survivors.

Issue #279 of the Marvel U.K. Transformers comic featured a story called "Divide and Conquor!" where Soundwave lead the bulk of the Decepticon forces on Earth against the Autobot Earthforce headquarters while Starscream attacked an oil tanker. Sent into battle by Prowl, the Dinobots routed the main Decepticon forces while Springer lead the Autobot Survivors, Broadside, Inferno, Skids, and Carnivac to defeat Starscream.

Broadside was depicted as being very large in all modes, standing at least twice as tall as Ultra Magnus, and being able to combat giant Decepticon combiners alone. Broadside first appeared in episode 67 of the animated Transformers series, "The Five Faces of Darkness, Part 2".

Broadside had a troubled history in the animated continuity. A large Autobot spaceship that looked exactly like Broadside's jet mode appeared in "Five Faces of Darkness", but was destroyed in the episode. In the following episode, "The Killing Jar", a Quintesson scientist disguised his spaceship as Broadside and beckoned the Decepticon Cyclonus to come inside. Inexplicably, Cyclonus complied.

Broadside's first confirmed appearance was in "Thief In the Night", where he appeared in Nimitz-class aircraft carrier mode.

He fell on Devastator in "Carnage in C-Minor", appearing in robot mode (albeit an old prototype design). In "Grimlock's New Brain" and "The Burden Hardest to Bear", Broadside finally appeared in his correct robot mode.

He last appeared in episode 92, "The Burden Hardest to Bear".

Broadside appeared in several episodes of the Japanese-exclusive Headmasters series. He was last seen in episode 16 being used by Arcee and Spike Witwicky to explore deep space in aircraft carrier mode.

Broadside appeared in the second Transformers: The War Within comic series by Dreamwave as a member of the Wreckers led by Springer. This was before he became a Triple Changer, and his only alternate mode was that of a Cybertronian jet.

Note: According to his Dreamwave More Than Meets the Eye bio, Broadside was cured of his fear of heights and seasickness when Shockwave turned him into a Triple Changer, but he still likes to complain about both anyway.

Broadside, in Cybertronian form, appeared in issue #2 of The Transformers: Stormbringer series by IDW Publishing. He was among Springer's Wreckers on the planet Varas Centralus in the Kol system when Optimus Prime redeployed the Wreckers to a mission on Cybertron. He fought the cultists under Bludgeon and later fought Thunderwing himself, but was grounded when the monster ionized the atmosphere. He was later seen inspecting Thunderwing's inert corpse.

Broadside appeared in Spotlight: Doubledealer where he was among the Autobots fighting Thunderwing on the planet Corata-Vaz.

Broadside appears in the TFcon 2012 live script reading prelude comic. In this story is a member of the Wreckers who confront the Constructicons and Predacons on prehistoric Earth.[3]

A Triple Changer who turns into an aircraft-carrier and F/A-18 Hornet jet fighter.[4]

The second use of the name Broadside was for a Mini-Con in the Transformers: Armada line. He is a member of the Night Attack Team and was packaged with Fetch and Scattor.

Broadside loves the dark. He excels in darkness, and has a cruel streak that has certainly helped the Night Attack Mini-Con Team earn its grim reputation (and string of "dead or alive" warrants on numerous planets). However, he's endlessly spouting off what he believes are creepy warnings about the darkness swallowing victims, endless nights and the like that some have a very hard time taking seriously, or just find outright pretentious and annoying.

His only appearance in the Dreamwave comics was on his bio page in Transformers: Armada More Than Meets the Eye #2.

He was a recolor of Armada Knockout and Crack, and later recolored into Cybertron Steamhammer.
Some versions of Armada Galvatron included the Night Attack Team as a bonus item.
Various special 6 packs of Mini-Cons was released in the Energon line. One contained the Night Attack and Road Wrecker teams. The toys were identical to the Armada versions.[5]

The third Broadside is a Decepticon-aligned Mini-Con. He transforms into a tank and is part of the Mini-Con Demolition team.

Each member of the Demolition Team is an expert in engineering and construction, which makes them all the more effective at their actual function: turning things into piles of unidentifiable rubble. Allied with the Decepticons, these guys are sent in first to weaken Autobot fortifications, making it easier for the main army to swarm in.

Broadside is a former security officer who staged lead the group of Mini-Cons in joining up with the Decepticons.[6]

He is personally responsible for the death of several Mini-Con leaders.[7]

This toy, like all the initial Classics Mini-Cons, was initially intended to be part of the Transformers: Cybertron line, but was released after that line had ended—the packaging was changed to resemble that of the Classics line, despite him NOT being a homage to Generation 1 Broadside.[8]

As revealed in the artbook for Transformers: Fall of Cybertron, there was a concept for a version of Broadside that appeared as a giant Autobot on the scale of Trypticon. He would apparently have had the alternate form of a large vehicle that serves to transport Trypticon's remains in the final game.

Retrieved from "https://en.everybodywiki.com/index.php?title=Broadside_(Transformers)&oldid=540273"
Categories:
Hidden categories:
This page was last edited on 30 September 2019, at 17:31.
This page has been accessed 490 times.
Content is available under License CC BY-SA 3.0 unless otherwise noted.
Privacy policy
About EverybodyWiki Bios & Wiki
Disclaimers